Emily Midorikawa is the author of the new book Out of the Shadows: Six Visionary Victorian Women in Search of a Public Voice. She also is the coauthor of the book A Secret Sisterhood. She teaches at New York University London.

Q: What inspired you to write Out of the Shadows, and how did you choose the women to include in the book?

A: My interest in Victorian spirit mediums dates back to me reading an unpublished letter from Harriet Beecher Stowe to George Eliot while doing research for a different book a few years ago.

In this letter, Stowe mentioned an American woman called Kate Fox who, along with her sisters Leah and Maggie, took the late 19th century by storm, thanks to their apparent abilities to contact the dead. I was intrigued by Stowe’s descriptions of Kate, whom she depicted as a strange, sprite-like character, and so I decided to discover more.

Researching the Fox sisters opened up a door to a mysterious world, led by other individuals—many of them women—who shared the same supposed talents.

I was particularly fascinated by the women who used their unusual fame to carve out huge public profiles for themselves that often took them far beyond the realms of private spirit readings and even mass public séances.

Victoria Woodhull leveraged her notoriety into a successful Wall Street career and a highly-publicized run for the U.S. presidency.

Georgina Weldon's belief in the spirit world almost saw her confined to a London asylum, but she would go on to become a famous campaigner against archaic lunacy laws.

Along with the Fox sisters, these were the women whose stories I ultimately decided to include in Out of the Shadows.

A: After that letter—which I read in one of the New York Public Library's scholarly reading rooms— sparked my interest, I followed up my research closer to home, in the UK where I live.

The University of London's Senate House Library contains the Harry Price Library of Magical Literature, which is as weird and wonderful a resource as it sounds. The materials it holds did a great deal to enrich my understanding of 19th-century Spiritualism.

Eventually, my research would take me to many other libraries and museums on both sides of the Atlantic.

I was surprised to learn what prolific writers many of the women who feature in my book were, and grateful to discover that rare editions of their published works survive, as well as many of their handwritten papers.

I’m always interested in any links I discover between each of the separate life stories in my group biographies. In the case of Out of the Shadows, some of these women were admirers of each other; others were friends; a couple didn't get along at all, and had a longstanding rivalry. 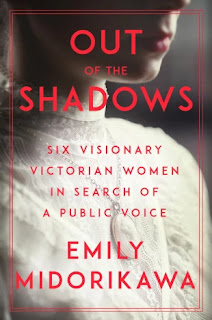 Q: How would you compare the Spiritualist movement in the United States and in England, and what do you see as the connections between Spiritualism and women's suffrage?

A: There was a political element to both British and American Spiritualism as a great many Spiritualists were also committed to the idea of progressive social reform. However, this element was perhaps more pronounced in the United States.

Certainly, in the case of the American women's suffrage movement there were well-established links between many key Spiritualists and suffrage campaigners of the era, which means that representatives of both appear at historically significant moments in my book, including the inaugural women's rights convention, at Seneca Falls in 1848, and Victoria Woodhull's address to Congress in 1871.

A: The legacy of these women is complicated. On the one hand, all six of them were genuine trailblazers, who achieved astonishing levels of cultural and political influence at a time when women's voices were seldom heard in public.

On the other, although many educated and deep-thinking individuals of their era had unshakable confidence in these women's abilities, advances in science over the passing decades mean that few people today will place as much trust in their talents.

In general, modern readers will believe that these women were involved in some trickery and deception, including sometimes of themselves. It is therefore a challenge to fit their stories into straightforward histories of the journey towards greater female empowerment.

However, as I argue in Out of the Shadows, we should not only be willing to give our time to straightforward figures. The Fox sisters, Kate, Leah, and Maggie; Emma Hardinge Britten; Victoria Woodhull; and Georgina Weldon all played crucial parts in the social landscape of the late 19th century, and I believe their lives are absolutely worth exploring on that basis.

A: At the moment, I am mostly working on getting the message out there about this book—doing interviews like this one, writing commissioned articles, preparing talks to give.

But, when I have a spare moment at my desk, I spend it on research for a new project—a novel this time, set in roughly the same period covered in Out of the Shadows, but with a very different subject.

A: I have an almost-two-year-old daughter and another baby due next month. I mention this because, when I think of this book's journey from research, to writing, to publication, they are very much part of it.

I was already researching and writing the book before I learned I was expecting a baby, but I undertook my most extensive research trip (to the U.S.) four months into my pregnancy.

I completed the book's first draft a week before giving birth, and later (after taking a few months off), I spent many more hours working in libraries with a timer set to remind me when I needed to take breaks to pump milk.

It wasn't always easy, but I'm lucky to have a husband with whom I share the childcare. Without his support, completing the book would have been impossible.