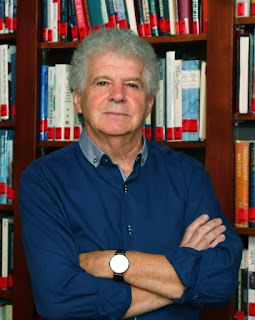 Colin G. Calloway is the author of the new book "The Chiefs Now in This City": Indians and the Urban Frontier in Early America. His other books include The Indian World of George Washington. He is John Kimball Jr. Professor of History and Professor of Native American Studies at Dartmouth.

A: I usually choose to write a book because I think I’d like to have a book like that.

The idea for this book emerged slowly. I’ve done a lot of research on Indian diplomacy in the colonial era and early Republic, much of which took place in cities.

It struck me that tribal delegates must have been a pretty regular sight on city streets and it (finally) dawned on me that some of them were in town for a long time but I didn’t know much at all about what they did during their “down time.”

I wanted the title to convey the idea that Eastern port cities were as much a frontier for Indian visitors as Indian country was for white people, but that got pushed into the subtitle.

I chose the title because it was a phrase that newspapers used time and again when reporting the visits of Indian delegates (which is why it is in quotation marks).

In fact, it became such a standard term that I used it as a search phrase in working through hundreds of newspapers online. If I entered “Indians” or “chiefs” or various other terms, I got bogged down in endless reports about wars, but if I used Chiefs in the City it took me right to stories I wanted to read.

Q: How did you research the book, and did you learn anything that especially surprised or fascinated you?

A: I’ve done lots of work with government records in the past but I knew I had to look elsewhere for the kinds of information I wanted, so I started floundering about in early American newspapers.

It was “needles in the haystack” kind of research but I found different angles on things, interesting anecdotes, and things I had not been aware of before. 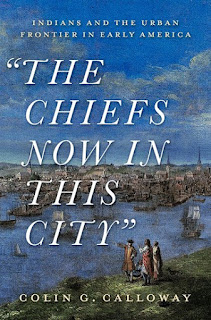 I knew that tribal leaders were often invited to formal dinners with colonial and federal government officials, but I was surprised to find them dropping in on private citizens for dinner, or breakfast!

I also got interested in how many times visiting chiefs attended, and participated, in the circus in the 1790s, which is why I give quite a few examples of that.

Getting Native people’s viewpoints and perspectives was a challenge, of course, and their responses were often filtered through non-Native records.

I did not want to presume to say how Native people saw things, but I could at least say how other people saw them by finding accounts in the journals of travelers who recorded descriptions of the same things at roughly the same time.

Once in a while, those travelers would meet the chiefs in the city, and on occasion they’d even say what they thought the Indians thought of it all.

Q: Did the interactions between the delegations and others in the cities change over the period you focus on in the book, and if so, how?

A: One of the reasons that tribal leaders came to the cities so often was that Indian nations were still powers in the land.

But the power dynamics were shifting all the time, of course, sometimes at a local level, and eventually across the board. Even though the United States continued to treat some delegations as state visits (like the Creeks who came for the Treaty of New York in 1790), it increasingly regarded them as supplicants, who come to agree to land sales rather than to negotiate the terms of an alliance.

Q: What was the role of women in these delegations?

A: From the official records, one would think not very much, although Indian women accompanied chiefs from the Wabash when they dined with George Washington.

But obviously there’s a story here that the records (and I) do not cover adequately. Government officials who wanted to talk about war, trade, and alliance spoke to Native men, who had responsibility for these things.

They were much less interested in Native women, who were responsible for raising crops and children, and so they missed the roles that Native women played in councils and decision making.

Tribal chiefs sometimes came on their own. Larger delegations often brought their families, and the women not only looked after lodgings, food, and children, they also wove the wampum belts that were essential to the conduct of diplomacy.

I was able to find very little about how Native women who were in town for weeks with a tribal delegation interacted with other women they met on the streets, or with local Native women who came to town regularly to peddle food and baskets.

A: I’m working on a book on The Scotch-Irish Invasions of Indian Country. It looks like it will be a big book.

A: I know there are many more things out there that I was not able to find that would enrich and modify the story I try to tell, but I hope I managed to do enough to get people thinking that Native Americans included cities in their orbit rather than just retreating from them.