Melissa Ginsburg is the author of the new novel The House Uptown. Her other books include the novel Sunset City. She is Associate Professor of Creative Writing and Literature at the University of Mississippi, and she lives in Oxford, Mississippi.

Q: What inspired you to write The House Uptown, and how did you create your characters Ava and Lane?

A: Some big philosophical questions led me to write this book.

My mother suffers from dementia, and in watching her decline over the past several years, I have wondered about the nature of identity and its connection to memory. What happens to the self when the mind stops working?

At the same time I had been thinking a lot about feminist issues, particularly the obstacles that female artists face. We are trained to orient our lives around relationships, which demand our time and creative energy. Women’s relationships to art and art-making falls outside of this stricture.

The character of Lane emerged from all these concerns, as well as a belief in the enduring nature of art. She believes in her own artistic vision more than any other thing in her life.

Her granddaughter Ava is based on children I knew in Iowa, including my stepsons. She is an outsider who looks at New Orleans and Lane with clarity and curiosity. She cares about right and wrong, and about people. 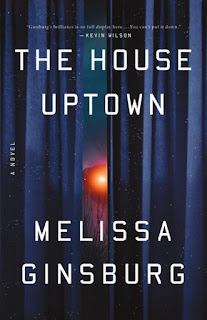 A: Setting is extremely important. I’ve been wanting to write about New Orleans my whole life, and about this house in particular. My mother grew up in this house, though I’ve embellished it slightly in the book, and I spent a lot of time in it as a child. It still holds a mystical power over my imagination.

I grew up in Houston and went to New Orleans all the time. My parents were so homesick for it, in the particular and thorough way that only New Orleanians are homesick. I was raised with the belief that this city was the center of the world.

A: I knew the ending of the plot more or less, but I wasn't always sure how to get there. The middle of the book changed the most. I had the beginning and end and the four main characters before I started.

But the idea for the very last chapter did not come to me until fairly late in the writing process. I allowed myself to approach it as I would a poem, and it felt right for the book. I could not have known that or been able to do it in advance.

A: I hope these people, Ava, Lane, Oliver, and Artie, stick with readers afterwards. They feel so real to me, and I still think about them all the time. I care so deeply about each one, though they are all flawed and hurt others in various ways, intentionally and unintentionally.

Each character is struggling to figure out how to live a life that is meaningful, and the compromises and mistakes they make inform that question as much as their most noble impulses.

I hope readers will love this vicarious visit to New Orleans, too. I’ve missed it so much during Covid!

A: I’m writing poems—I have a poetry book coming out in 2022 called Doll Apollo. It deals with paper dolls, the moon, conspiracy theories, female anger and desire.

I’m also working on a short story set in New Orleans about teen girls who have fled their unsafe family homes and are squatting in an abandoned house. They read Tarot for change on the street and try to protect each other.