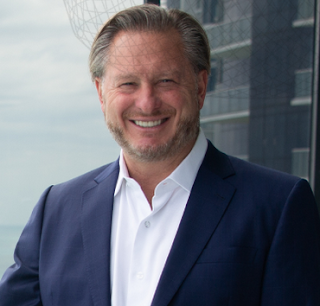 Colin Lancaster is the author of the new novel Fed Up!: Success, Excess & Crisis Through the Eyes of a Hedge Fund Macro Trader. A longtime Wall Street professional, he is based in London and Miami.

Q: What inspired you to write Fed Up!?

A: Writing a novel is something that I have always wanted to accomplish and was motivated to do by my daughter who is the real writer in the family. I have always been an avid reader and have really admired writers like Michael Lewis.

For me, I wanted to capture the extraordinary period of time, fall 2019 to spring 2020, that we just experienced, through the eyes of a macro trader, which is what I know best.

Q: How much did you incorporate your own professional experiences into those of your characters? 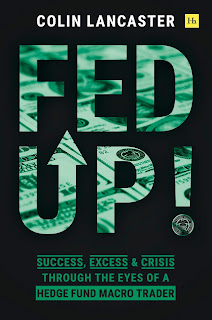 A: Quite a bit. Two key characters — Lifecoach and the Rabbi — are based on close personal friends. And, I will say that Lifecoach in real life is a very good beer pong player!

And the Boss is like me — at least to the extent that he shares my background. I would hope that people who know me would not think that I am quite as despicable as the Boss. But this was intentional. At the end of the day I wanted him to be this way.

He is cutthroat, hypocritical with his team, motivated by money. He likes to talk about wealth inequality and social injustice but doesn’t really care about these things (particularly as soon as he starts making money). But my guess is that some people will admire him.

This is similar to Michael Lewis and Liar’s Poker or the character of Gordon Gekko in Oliver Stone’s movie Wall Street (both Lewis and Stone thought that they were exposing the sins of Wall Street; instead many people were attracted to these descriptions of the people involved and wanted to go work on Wall Street).

A: No, I did not know how it would end and this was something that made it exciting (and challenging) for me. I was forced to react to how the world was changing and it was changing nearly every day in terms of new facts and data about the spread of COVID, the state of the economy, etc.

A: I wanted to use the backdrop of the markets and the pandemic to address some incredibly important issues: I wanted to highlight the excesses in our current world and what I would consider to be a new era of greed.

Or as the main character, Boss, would say, "This is much more than Greed is Good. This is steal as much as you can and if you are wrong we will bail you out….”

I also wanted to discuss rising wealth inequality and the role of monetary policy in this development.

It is interesting to me that the wealth inequality issue is almost always framed as a political outcome. The book tries to make the case that, underneath it all, it's very much a monetary phenomenon.

Since the global financial crisis of 2007-2008, the Federal Reserve has pulled every lever imaginable (and then some) to improve the plight of the average American... but the benefits have accrued overwhelmingly to the upper class -- i.e., those who own assets.

I wanted to be able to describe this in the context of an entertaining cast of characters!

A: Well, a couple of things. I have another book that is nearly complete. It is a history of macro investing. It’s nonfiction and research based.

And I will soon be back and starting a new project to launch a large new macro business. I love the markets, despite some of the problems that I write about, and you can’t keep me away from them for long!