Marian Leah Knapp is the author of the new book Prohibition Wine: A  True Story of One Woman's Daring in Twentieth-Century America. It focuses on the life of her grandmother, Rebecca Goldberg. Knapp's other books include Aging in Places. She lives in Chestnut Hill, Massachusetts.

Q: What first inspired you to write a book about your grandmother’s experiences?

A: At frequent family gatherings, my father, Lou; his two brothers, Joe and Eddie; and sister, Lena, would ultimately end up in conversations about what it was like for them growing up in rural Wilmington, Massachusetts, in the early 20th century. They talked about the hardships they endured being poor and fatherless.

I listened and even as a young, naïve child, I was still able to detect the profound impact of their fraught childhood. Yet it was only as an adult that I developed a true appreciation of what they went through.

Later in their lives, my dad and Eddie wrote autobiographies describing their journeys from childhood through adulthood and into older age. Neither of their manuscripts were published, but over the years, I read these them many times.

I also completed interviews with Lena, who had a somewhat different perspective being the only surviving daughter and able to share incidents that her sons never knew.

Without fully acknowledging it, I sensed that someday I would try to pull together their memories into one cohesive story. As I got older and pondered how to do that, I realized I had to learn more before proceeding.

In the middle of doing research on the family, I became uncomfortable with reframing my dad’s, uncle’s, and aunt’s words. I ultimately realized that the true focus of the story was their mother, my grandmother Rebecca.

She was the one who kept them all together after tragedy struck and it was her story that needed to be told.

Q: How much research did you do to write the book?

A: From these family members, I knew quite a bit about their stories, but was missing details, and had little knowledge of the broader issues in which their lives were embedded.

So I prompted myself to start asking questions, ones that I hadn’t thought about before, but for which I needed the answers so I could write an actual book.

The number of questions was prodigious. When and how did the family emigrate from Eastern Europe and why?  Why did they settle in the Boston area? What was life like in immigrant-laden Boston, especially for girls and women? 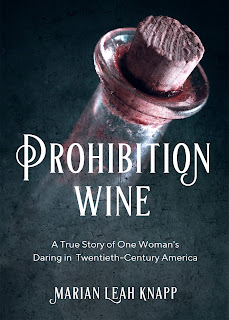 How did Rebecca find her husband, Nathan Goldberg? What was it like being married to a man Rebecca may or may not have chosen for herself? How did the Goldbergs get to Wilmington? When and why did Nathan die in a tragic accident?

What was Rebecca’s life like after Nathan’s death? What were her choices for survival? How did Rebecca get involved in selling illegal alcohol? What was the history and consequences of the anti-alcohol movement and Prohibition? Why was Rebecca called before a judge and why was her case dismissed?

The research to answer these and a myriad of other questions took several years and led me into topic areas that I knew little about.

This expedition of questioning led me to do research on many topics in different arenas. I searched ship’s passenger lists to find family names, dates, routes, and the names of ships on which family members traveled.

I read extensively about Jewish life in the Russian Empire and the diversity of social and political movements in Jewish society;  immigration and immigrants, especially Jews from Eastern Europe; Jews in Boston; women’s roles in traditional Jewish families; women’s reproductive options in the early 20th century; anti-Semitism in the old country and America; earning a living in the old and new worlds; how people got from one place to another, including on trains; the history and enactment of the Volstead Act (Prohibition); and the under-recorded underbelly of the small-scale, local alcohol trade.

Q: What do you think her story says about Jewish women immigrants in the early part of the 20th century?

A: I think Rebecca’s story illustrates the strength that immigrants had to have to make it in America.

In Rebecca’s family, her older and younger sisters all worked to earn money before and during marriage. However, each had a husband who provided the main income stream.

Rebecca’s younger brothers had the good fortune to get high school educations and, therefore, had more options for independence and economic stability.

In her early marriage, Rebecca also had two incomes until her husband died and she was on her own. She did have some intermittent help from her parents and siblings.

It is hard to know what another widowed Jewish woman in similar circumstances would have done. However, it was not uncommon for widowed mothers to place children in orphanages or send them out to live with and help support other families.

But my grandmother had two indisputable, unshakable goals: to keep the family together and have her children graduate from high school. She achieved these goals by taking firm control of her life and the lives of her children.

I come away from writing this story with the recognition that the status of poor immigrants in this country today bears stark similarities to my grandmother’s situation more than 100 years ago. Anti-immigrant attitudes still exist in some segments of American society and severe challenges to earning enough money to keep families together are pervasive.

A: I wrote this book with another title that did not include the word Prohibition. My publisher thought that the current title said more about what the book was about and reflected better the background of the “wet” and “dry” era.

The subtitle implies a “true crime” genre. While many true crime books involve murder, Prohibition Wine does not. Other true crime books such as Susan Orlean’s The Orchid Thief offer less violent tales and I feel that my book falls into this category.

My grandmother did break the law, as did a number of other people in this story. She did not do this to get rich or have fun. She had to weigh the risks and benefits of being a bootlegger and the imperative of keeping the family together. Family solidity and cohesiveness won out.

A: I have several books in the pipeline in my head. The next one, which is partially written, is about a group of women, of which I am a member, who grew up as close friends in South Providence, Rhode Island, in the 1940s and 1950s, and still, today, sees itself as a cohesive group.

The book focuses on the questions of why we came together in the first place and why have we maintained that connection for more than 70 years.

I have done a lot of writing on issues of aging and have published close to 150 articles and two books: Aging in Places: Reflective Preparation for the Future, and A Steadfast Spirit: The Essence of Caregiving. I am collecting articles, books, and commentaries for a potential book on ageism.

A: When I was 64 years old, I went back to school to earn a Ph.D. and passed my dissertation defense right before my 70th birthday. My research was on the total environment in which people age.

I am an older author and only realized I could write when I was in my 60s. The important message is that it is never too late to jump into something new and test your creativity and courage.