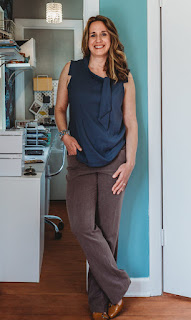 Marcy Campbell is the author of Rule of Threes, a new middle grade novel for kids. She also has written the picture book Adrian Simcox Does NOT Have a Horse. She lives in Ohio.

Q: What inspired you to write Rule of Threes, and how did you create your character Maggie?

A: It was actually my agent who suggested I try writing a middle-grade novel (I’d been writing picture books up to that point).

I started with the age-old storytelling trope of a stranger coming to town, in this case, a stranger who is related to Maggie, which sets the plot in motion.

I wanted Maggie to have a hobby that I haven’t seen much (yet) in middle-grade. Though you might not think of tweens and teens as being into interior design, I haven’t met one yet who doesn’t enjoy personalizing their bedroom.

Maggie starts there, and loves that process so much, she makes a whole business out of decorating. That hobby tied in well with her perfectionism, and once I brought in a bunch of design “rules,” it really helped shape the plot.

Q: The Publishers Weekly review of the book says, "Campbell’s engaging tale of redefining family is anchored by occasionally prickly Maggie’s voice as she learns to loosen her own rules and find harmony in the imperfect." What do you think of that description? 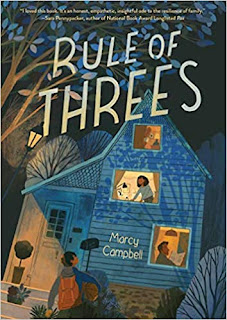 A: I love that description! The idea of finding “harmony in the imperfect” really gets at the crux of the story.

Maggie prides herself on being able to put everything in its place, both in terms of interior design, and her personal life. She has to learn to loosen her expectations a bit and allow the people she loves to be imperfect. This starts with accepting imperfection in herself.

A: The title refers to an interior design rule that odd-numbered items look better (when grouped on a table, for example) than even-numbered ones. When I envisioned Maggie and knew she had a love of decorating, I decided to make use of various design rules throughout the book.

For Maggie, though, this particular rule is also personal. She thinks three is the perfect, balanced, number, in part because she has two best friends (the three of them make up her trio of partners in her design business, Best Foot Forward aka BFF). She also has a family of three, with her parents and herself.

All this “perfection” quickly gets thrown out the window when her previously unknown half-brother, Tony, arrives on her doorstep, and one of her friends starts pulling away. She has to make different rules, and that isn’t easy for her.

A: Yes, I knew how it would end, for the most part. I once tried to write a novel (for adults) by just winging it, letting the plot happen as I wrote, and it was a disaster.

Now, I know I need to outline. I actually spent a great deal of time figuring out my characters and the basic plot before I wrote a thing.

I did change some things as I went along, deciding I didn’t need certain scenes, and adding some others, but knowing where I needed to end up helped me point the rest of the book in that direction, which meant fewer drafts.

A: I’m ramping up publicity for a fall picture book I have coming out titled Something Good. It’s about a school community having to rebuild their trust in each other after something bad is found written on a bathroom wall. It’s out in September and illustrated by Corinna Luyken.

I’m also working on more picture books and another middle-grade novel. I don’t like to give much away at this stage, so I will vaguely say that novel is about “happiness.”

A: That middle-school kids (and all kids) are dealing with a lot these days. I am the parent of two middle-schoolers myself. Yet, I still run into grown-ups who don’t think books for kids, even contemporary, realistic ones like mine, should include any of the harsh realities kids face.

Mostly, these are older adults, reminiscing about a worry-free time in the past, which was never real to begin with. The difference today is that we’re free to examine current issues and work toward solutions, even in books for the youngest children, and thank goodness.

Thank you for hosting me, Deborah!