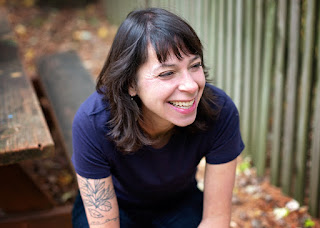 Emma Carlson Berne is the author of the new children's picture book Books by Horseback. She has written more than 120 books for kids and teens, and she lives in Cincinnati.

Q: You write that your great-grandmother was an inspiration for Books by Horseback. Can you say more about that?

A: Yes, my great-grandmother, Alva Hutchinson, was from Huntington, West Virginia - very near eastern Kentucky, where Books by Horseback is set. She only went to the sixth grade and later taught herself to read.

Her husband, my great-grandfather, Ralph, was a coal miner who broke his back in a mine accident. He couldn't work in the mines anymore after he healed, so Alva, Ralph, and Alva's sisters, Opal, Ethel and Gertrude, all moved to Dayton, Ohio to work in the Frigidaire factory there.

They were part of the Appalachian migration of the mid-20th century that brought many Appalachian people from the mountains to the cities of Cincinnati and Dayton to work in the factories there. 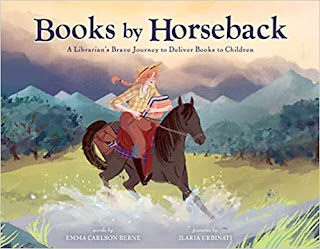 A: I loved talking with the experts who advised me. I made a point of having as many conversations with as many knowledgeable people as I could.

In particular, I was fascinated to learn that the packhorse librarians learned bookbinding from an expert sent by the state librarian of Kentucky.

They cleaned and bound deteriorated books, made bookends out of license plates, and when books were too beat-up to be rebound, they cut out the pages and pasted them into binders. Then they would cut out art from magazines and paste those in the binders, too, to illustrate the books.

Q: What do you think Ilaria Urbinati's illustrations add to the story?

A: They are so beautiful, dynamic, and full of action and feeling! I absolutely adore the energy they bring to the text. Many of these librarians were quite young - teenagers, really - so I love that Edith looks youthful, eager, and unstoppable.

Q: What do you think the book says about the importance of reading?

A: I really wanted to convey just how much people wanted these books and how popular the program was. Most houses at the time had very, very few books or none at all. Some schools had none at all.

But that didn't mean people didn't want books - it just meant they had a hard time getting them.

A good portion of adults couldn't read, so librarians would often stay to read aloud. They would also read letters and other documents people might have received, but could not read themselves.

A: I'll have a new book coming out next year that couldn't be more different - a mystery novel for middle-schoolers about Jewish summer camp. It's tentatively titled Shabbat Sabotage. I had fun mining my own camp memories - including the embarrassing ones - to create the story of Maya, Yael and Dani.

A: I hope to visit schools and libraries in the Ohio-Kentucky-Indiana-West Virginia area this summer and fall to talk about Books by Horseback. I miss seeing readers' faces! Email me at ecbernay@gmail.com if you'd like to arrange a visit!