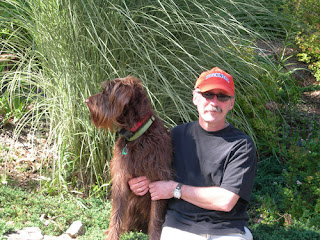 Paul Meisel is the author and illustrator of the new children's picture book My Tiny Life by Ruby T. Hummingbird, the fourth in his Nature Diary series, which also includes My Awesome Summer by P. Mantis. He has illustrated more than 80 books.

Q: What inspired you to write My Tiny Life, and how did you create your character Ruby T. Hummingbird?

A: This book is the fourth in my Nature Diary series. The series started with a book about praying mantises, followed by a bluebird book, and then one about brown marmorated stink bugs.

All of these books are about animals that can be found in my yard. Because I’ve only seen Ruby Throated Hummingbirds here (although I’ve read that five or six varieties can be found in Connecticut) naturally this book had to be about them.

Like many people who can spend hours watching these tiny birds at a feeder, I was intrigued by their showy flying displays as they zoom up and down, backwards and forwards. I was also inspired by their feistiness—their desire for the most part to NOT share, flying all around the yard chasing each other, and occasionally giving in and drinking together.

A: Since I’m not a scientist or naturalist, I did a fair amount of research for this book.

I was interested to learn that hummingbirds don’t mate for life as bluebirds do, which seems in character given their independent nature. 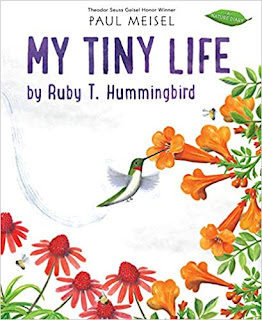 I knew they were small but I was still surprised to learn that although they weigh only as much as two pennies, they can fly for 18-24 hours without stopping when they travel over the Gulf of Mexico during migration.

It was also surprising to learn that scientists believe Ruby Throated Hummingbirds travel over the Gulf only in the spring when they return to the United States and not in the fall when they travel south.

One theory suggests that they’re not in a hurry when traveling south and can take the longer land route, which they somehow know is safer owing to storms that form over the water in the fall. Scientists believe the hummingbirds are anxious to return for the breeding season, which can be quite competitive as they vie for mates.

Q: Did you focus on the text first or the illustrations first, or did you create them simultaneously?

A: For these books I write the text first. Because the text is pretty descriptive, my wonderful editor, Grace Maccarone, has a good idea of what the illustrations will look like. If she likes the idea and the manuscript she’ll present it at a submissions meeting. If the publisher is interested, I’ll submit the text and an illustration dummy.

Then I’ll make revisions to the manuscript, the illustrations, or both.

I resubmit the full dummy, which is then sent to an expert, who inevitably suggests changes or additions. Once everything is approved I will do finished art. Because these books are scientifically accurate (aside from some artistic license), it’s a slightly longer process than it might be for a work of fiction.

A: I hope kids learn that Ruby Throated Hummingbirds have a lot of personality, that they’re unique birds in both size and spirit, and that they’re extraordinary fliers!

As with all of the books in the Nature Diary series, I hope kids come to understand something about a life cycle, and that each animal is a member of an ecosystem in which sometimes the main character is a predator and sometimes it’s the prey.

I also hope kids come away with a sense that nature needs to be in balance for each animal to survive and thrive, that they - and we - need a healthy habitat to live in.

A: I’ve just finished See Me Go, which is in the I Like To Read series. See Me Run, an ALSC Theodor Seuss Geisel Honor Award winner, was the first book in my series of doggy adventures. See Me Go takes the dogs underwater, into outer space, and inside an Egyptian tomb. Quite the adventure!

A: I’ve been lucky to be able to make books about subjects that are close to home, or, in the case of stink bugs, IN my home. I hope that by reading my books kids will get the idea that their own backyards, parks, and neighborhoods are full of amazing things to write about if they look closely.

I also hope kids realize that they can write or draw things that they aren’t “experts” about, just as I’m not an expert bird illustrator or naturalist/scientist. Kids can do research in a library or online and learn so much, just as I did when I did the research for My Tiny Life by Ruby T. Hummingbird.