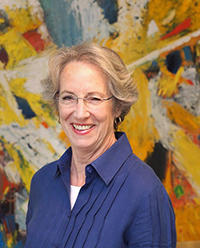 Ames Sheldon is the author of the new novel Lemons in the Garden of Love. Her other novels include Eleanor's Wars. She is based in Minneapolis.

Q: Your new novel was inspired by your great-grandaunt. What intrigued you about her life, and at what point did you decide to write this book?

A: First, I was intrigued by the fact that Blanche Ames Ames was an artist who created political cartoons in support of getting women the vote, and that her cartoons were published in national magazines like The Saturday Evening Post, where President Taft excoriated her for her cartoon entitled “Meanwhile They Drown.”

Then I learned that Blanche co-founded the Birth Control League of Massachusetts in 1916, which helped me understand my mother’s and my grandmother’s strong commitment to Planned Parenthood.

I was impressed by Blanche’s courage; she never gave up her fight for birth control despite powerful opposition by the Roman Catholic Church in Massachusetts.

Blanche was recognized as a talented portrait artist and as a botanical illustrator, who collaborated with her husband Oakes Ames, a professor at Harvard and world authority on orchids.

She was the mother of four children as well as an inventor and the architect of the mansion known as Borderland that she and her husband built in 1911.

And then I discovered that Blanche wrote a 625-page biography of her father General Adelbert Ames, the Reconstruction governor of Mississippi, in response to John F. Kennedy’s characterization in Profiles in Courage of Adelbert Ames as a carpetbagger. In fact, Adelbert was a staunch abolitionist.

As Blanche’s 1964 book Adelbert Ames, Broken Oaths and Reconstruction in Mississippi showed, when Adelbert was appointed provisional governor of Mississippi, he took steps to advance the rights of freed slaves and appointed the first Black officeholders in the history of the state.

I was also intrigued to learn that George Ames Plimpton, founder of The Paris Review and author of Paper Lion and other books about sports, was Blanche’s grandson.

I decided to write this book after I had a dream in which Blanche told me to write her autobiography.

I considered writing a biography about Blanche Ames, but the editors I spoke with about the project told me Blanche wasn’t famous enough for a book about her to sell enough copies.

At that point I decided that the best way to approximate the feel of an autobiography by Blanche was to create my own version of her diary. 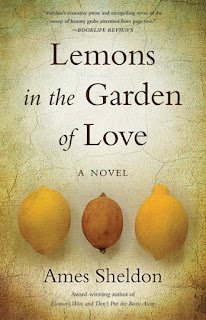 A: I did a great deal of research using primary sources in the Sophia Smith Collection at Smith College, the Schlesinger Library on the History of Women in America at Radcliffe College, and in the Nursing Archives at the Mugar Memorial Library at Boston University.

I read and had copies made of cartoons and drawings by Blanche, notes, speeches, meeting announcements and minutes, flyers, newspaper and magazine articles, academic papers, and a history of the birth control movement in Massachusetts. I didn’t find diaries in my research but I found letters to and from Blanche.

Books by Blanche and her husband Oakes provided more information, and her grandson Oakes Plimpton took me on a tour of Borderland.

In addition, I read books about suffrage in the United States (especially Elizabeth Cady Stanton’s History of Woman Suffrage) and books, diaries, poetry, and novels from the Progressive era, including the autobiography of birth control pioneer Margaret Sanger.

I did research on the founding of the Minnesota Birth Control League and on the treatment of abortions in the early 20th century and in 1978. Being able to interview women who’d had abortions in the 1970s and more recently was also very helpful.

One of the things that surprised and delighted me was learning that Blanche carved a penis and took it out on Commonwealth Avenue in Boston, demonstrating how to apply a condom; she was arrested for that. She also cooked up recipes for spermicides and made diaphragms in her home using liquid latex and rings.

Blanche corresponded with Margaret Sanger and argued with her about strategy for overturning federal laws prohibiting the dissemination of contraceptive information and devices.

In 1939, she took on Father J. Connell for his article “Birth Control: The Case for the Catholic” in The Atlantic, writing a letter to the editor that was published in a subsequent issue, where she argued, among other things, that the Church should follow the example of Saint Peter, quoting Jesus, that the Church should concern itself with things spiritual, not physical.

A: Lemons in the Garden of Love refers to a club made up of the male members of the matriarchal family at the center of this novel; they had an emblem, a lemon fastened on a white silk ribbon, from a popular song from the early 20th century, which they wore on occasion.

Lemons in the Garden of Love also reminds me that pregnancy can be an unwelcome outcome – a lemon — resulting from a woman’s experience of physical love.

A: I want my readers to understand how hard our ancestors fought to make birth control accessible to women—abortion as well—so they don’t take reproductive rights for granted, especially now when a woman’s right to abortion is being attacked in many states, with state legislatures banning abortion at six weeks, a time when many women don’t yet know they’re pregnant.

Trump’s nominating Brett Kavanaugh and Amy Coney Barrett to the U.S. Supreme Court appears to have energized those who would overturn Roe v. Wade.

Actually, it seems to me that the so-called “pro-lifers” care more about fetuses than they do about the fetuses’ mothers—I think it’s more accurate to refer to them as “pro-birthers.”

When they finish the last page, I want readers to feel inspired and empowered to fight for women’s right to reproductive freedom and thus control over their own bodies, their ability to map out their own lives.

A: I’m starting to think about writing a series of linked short stories about a magic fertility stone that has helped enable the seven women who have used it to become pregnant after months and years of unsuccessful attempts.

A: I started writing Lemons in the Garden of Love 40 years ago. My response to the inauguration of Donald J. Trump was to pull this manuscript out of the box it had been sitting in and to start rewriting it because I felt that my story had become terribly timely.

I finished polishing the last chapter on January 20 during the inauguration of Joseph Robinette Biden, Jr.