Damhnait Monaghan is the author of the new novel New Girl in Little Cove. She also has written the novella The Neverlands. She lives in the south of England.

Q: What was the inspiration for New Girl in Little Cove, and for your character Rachel?

A: The inspiration for my novel was the province of Newfoundland & Labrador. We moved there, from mainland Ontario, when I was 12.

Almost immediately we all fell in love with the island: its rocky coastline, unpredictable weather and the constant presence of the sea. Most of all though, we loved the culture - music, laughter, warmth. In many ways, the novel is an homage to both the province and its people.

To a certain extent my main character Rachel was inspired by my own experiences as a novice teacher. Like her I taught French in outport Newfoundland in my early 20s. Unlike her, I was not newly arrived on the island.

But it makes a far better story to drop a complete outsider into a unique setting and see how she copes (or doesn’t as the case may be!) Like Rachel, I had my own difficult moments as a new teacher - I was also asked how to say seal in French on my first day.

Q: As you’ve noted, the book takes place in a small community in Newfoundland. How important is setting to you in your writing?

A: Setting was important to me for New Girl in Little Cove. From the opening chapter, I wanted the reader to experience the claustrophobic nature of Little Cove contemporaneously with Rachel.

For me setting includes the timeframe. I set the novel in the 1980s in part because that’s the period during which I lived and taught in Newfoundland. But I also wanted Rachel to feel a real sense of isolation, to be fully immersed in a foreign culture and totally reliant on the locals: no texting, email, or FaceTime.

I also believe that dialect contributes to setting, helping a place and its people come alive. Douglas Stuart does this so brilliantly in Shuggie Bain. Newfoundland & Labrador has a distinct (and varied) dialect which Rachel initially struggles to understand. I only hope I’ve done it justice. 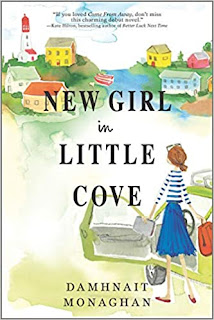 A: Because the novel is inspired by my own experiences, it was less a case of research and more of reminding myself about events from the relevant time frame – hit songs and current events from the 1980s, for example.

I also looked through old photo albums. However, rug hooking is a feature of the novel and I knew nothing about it, so had to research it. I spent some time studying instructional videos on the website of Deanne Fitzpatrick, a wonderful rug hooker originally from Newfoundland.

Something that surprised me? A few months before the book’s publication in Canada, I discovered there was a Little Cove beginner’s kit on Deanne’s website. I had never tried hooking, but with that coincidence, how could I not? Even more surprising was the fact that I completed the project and enjoyed it! I suspect I’ll do more hooking in the future.

A: I hope they take away a strong desire to visit the wonderful province of Newfoundland & Labrador post pandemic!

A: I don’t want to say too much in case I jinx it, but I’m working on a novel that takes place over the course of a summer, not in Newfoundland, but in mainland Ontario. My main character Maisie is at rock bottom and has to claw her way back up. We’ll see if she makes it!

A: I mentioned the distinct Newfoundland dialect above. The Dictionary of Newfoundland English is available online: https://www.heritage.nf.ca/dictionary/ and I’d love your readers to explore it.

Like any good teacher, I’ll even assign some homework. Look up these three words: “angishore,” “mauzy,” and “bangbelly.”