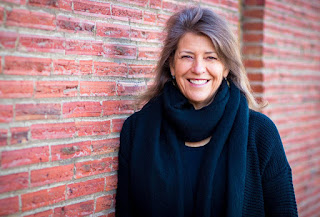 Jessica Barksdale Inclán is the author of the new novel The Play's the Thing. Her many other books include the novel The Burning Hour. She teaches in the UCLA Extension program and the MFA program for Southern New Hampshire University, and she lives in the Pacific Northwest.

Q: What inspired you to write The Play’s the Thing?

A: One Christmas Eve night as the party wound down, and we were collapsed in the living room, my older son's partner decided it was a great time to interrogate me about my name.

"What does it mean?" she asked.

I mentioned the vague idea of it being the feminine of Jesse, but then said, "Shakespeare invented it and used it in The Merchant of Venice."

Well, she went off, detailing how horrible Merchant is, and wouldn't it be payback if...if... "If all the Jessicas in the world to haunt him!" I offered.

On we went, spinning the story of our poor bedraggled Shakespeare dealing with four billion hauntings. Apparently, the name has been in the top one hundred 33 times in the U.S. alone. He would be one busy playwright if he had to go one by one through the list of Jessicas from the writing of the play (1596-1598) to the time of my novel (2018).

The next week, I really thought about our conversation, and something took hold. I decided to see what would happen if? And how? And why? That's how these novels creep up on us. 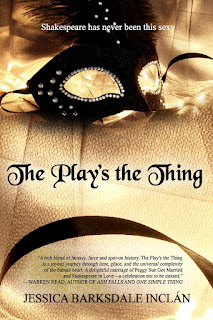 Q: Can you say more about what you see as the significance of the name Jessica in the book—and its significance to Shakespeare?

A: I'm not a big fan of the character Jessica in The Merchant of Venice. She--along with just about everyone else--is horrible to Shylock, her own father. Not an auspicious start to a name.

However, Jessica is seeing how she must adapt to the Christian world. Look how horribly her father is treated! All the Jews are treated poorly, living in a ghetto (Venice had the first Jewish quarter called a ghetto).

She has an opportunity to leave, and she takes it, though I wish she could have been a bit more feeling and kind about things (Portia is the female character to watch in this play, though she is wicked).

Q: Did you need to do much research to write the book, and if so, what did you learn that especially surprised you?

A: I probably researched more for this novel than any I have written and over a longer period of time. I felt completely lost the minute my character Jessica landed in 1598, so I went at it. Reading, calling people, asking experts.

My mother and I even went to London to walk the exact spots my characters do. We went to The Globe (the second one) and saw a couple of plays. I wanted to get the true sense of the theater because, as we know, the play is the thing.

I was amazed constantly by the way people lived. The process of a hanging stunned me, really. The hard work of just living did, too. We are so spoiled in our time, and maybe my character shows up a bit spoiled. But she starts to figure it out.

A: I wrote a very quick draft of the whole novel and then spent years filling it out. So I knew the spine of the story and the structure of the telling, but I revised and rewrote pretty much everything, some of the nicest changes coming in at the end. All in all, I'm really happy with how it came together.

A: During breaks in The Play's the Thing, I was writing a novel about my family history. Again, lots of research. Sadly, that novel never really came together.

However, the book I'm writing now about a smaller subset of that family in a very specific time "is" working and is really amazing to write. Sometimes, we just have to write a failed 500 pages to find our real subject!

A: I love Shakespeare. He came up with so many words, stories, and themes--as well and language, details, and metaphors--that we are still using today.

But bottom line, he was a man trying to make his way on this earth like the rest of us. I think that struggle comes through his work, and that struggle is the thing I admire most.