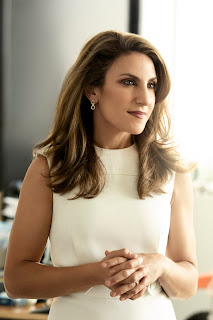 Gayle Tzemach Lemmon is the author of the new book The Daughters of Kobani: A Story of Rebellion, Courage, and Justice. It focuses on an all-female Kurdish militia that fought the Islamic State during the war in Syria. Lemmon's other books include Ashley's War. She is an adjunct senior fellow at the Council on Foreign Relations.

Q: What inspired you to write The Daughters of Kobani?

A: One of the soldiers from Ashley’s War called me and said you have to come to Syria. Initially my reaction was no—I realized what it would take to do justice to the story.

This is about women who took on men who bought and sold women, and about America’s partner in the war against the Islamic State….[The Kurdish Women’s Protection Units] put women at the center of their efforts. It’s so important in its scope and reach, it was impossible not to want to tell the story. It looks different when women hold power.

Q: The Publishers Weekly review of the book says, “Lemmon briskly sketches the biographies of individual fighters and commanders, and unravels the complex history of the region with skill.” How did you research the book, and what did you learn that especially surprised you?

A: It was such a privilege to research this story. There’s so much history shared in the news pieces, but there’s so much else underway at the time that few sought to understand the impact. 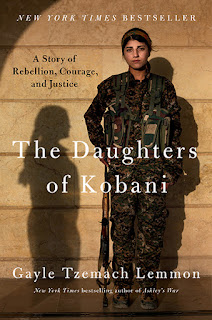 In a digital world, there’s so much captured on WhatsApp and Twitter. I looked at photo archives of local and international media. I dug into what we hadn’t seen. It’s such a complex story. We talk about war as nameless, faceless people and that’s not the case. These young women faced off against the Islamic State.

Q: How would you describe the dynamic between these women and the men they dealt with, and how successful were they in meeting their goals?

A: Nowhere have I ever seen women more comfortable with power and less apologetic in embracing it themselves. They’re proved themselves in battle. Their ideology says the Kurds can’t be free if women are not free. They had no reason to do anything other than advance their agenda.

A: I hope readers are inspired by the story. In the end, it’s about women who said just because something has been done doesn’t mean it has to be. They fought men who sold women for half a decade.

It’s a story of American national security. Fewer than 10 U.S. forces died in combat in Syria to rid the world of the hold of the Islamic State. 10,000 local forces died.

A: First I need to have this book out in the world. I’m working on a potential TV adaptation. Secretary Clinton’s production company [has the rights]. And Reese Witherspoon is producing an adaptation of Ashley’s War. It’s exciting to see.

This story is about military history. It’s about U.S. political history of the Syrian war. Most important, it’s a book about friendship, courage, and the fact that this is truly about the female superpower: just getting on with it.

They’re not superheroes, they’re just like women in your community who, when things are going sideways, do everything they can to protect the people they love. There’s no better way to take away the “other” than to share a narrative that shows our humanity.