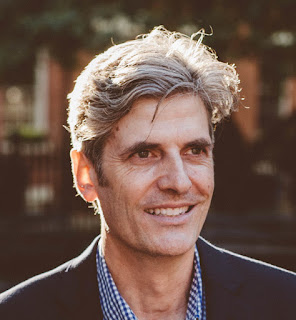 Stephen Savage is the author and illustrator of the new children's picture book And Then Came Hope. The book is inspired by the history of a hospital ship called the S.S. Hope. Savage's other books include Little Plane Learns to Write. He lives in Brooklyn.

Q: What inspired you to create this picture book about the S.S. Hope?

A: I got a text from my agent, who sometimes helps me grow ideas. She knew I’d done four vehicle books previously. When hospital ships started coming to New York and Los Angeles, the Comfort came to New York and I went to the docks. It was pretty impressive and inspiring.

I understood the symbolic power of hospital ships with red crosses on the side. I thought of taking the idea out of its current context, and found a ship online, the S.S. Hope. It had huge letters on the side, and I like typography—it was perfect!

It was a peacetime ship that sailed from 1960-1972. They retired the ship after that, and have an organization called Project Hope. My publisher is partnering with them—they deal with issues of child health, and you can use the book to talk to a child if they or someone in their family is sick.

The book is for toddlers, and we say that it’s inspired by the ship—ships didn’t have faces and talk! There’s a large element of fantasy. 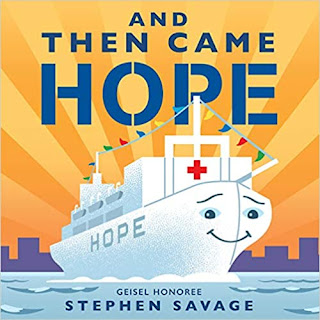 A: Not much of the real ship goes into the book. I researched it just for fun.

I learned some factoids that didn’t make it into the book. Julia Louis-Dreyfus traveled overseas on the ship as a child because her stepfather was a doctor. It went to various countries. The ship would give out powdered milk—it had a machine on board called the Iron Cow. They gave out milk cartons with the American flag on them. It was a way of promoting our standing in the world at a tense time.

In the book, the ship appears as a happy hospital ship. I had to get the ships right, the pictures right, to convey that they’re on the water. I would go out to the harbor in New London—I needed beautiful seascapes. In lockdown, going to the seashore was great. The journey you take to do a book is the fun part—you put some of yourself into the book.

Q: The Publishers Weekly review of the book says that “this story’s power is in the reassurance that a source of comfort and caring is never far away.” What do you think of that description, and what do you hope kids take away from the book?

A: That’s great! We wanted to convey that message, that it be a reassuring book. On the one hand, it’s a ship book. Kids love ships.

On the other hand, there’s a message that if you get sick you’ll be okay. Medical care is so complicated. The message is that you provide medical care and you trust the doctors. You tell the doctors if you’re not feeling well. Maybe both parents and kids can enjoy the book when one or both aren’t feeling well.

Q: What was it like doing a book about a hospital ship during a pandemic?

A: It was weirdly comforting. I liked it. I do books for young kids. To feel I was doing a book about this moment, and the moment was so big, it was like my therapy, doing this book. I was thinking, Wherever this goes, it’s going to be okay.

When I’m working on a book, it becomes all-consuming. You have to be all-in. I didn’t have a book lined up to do, and was in the middle of a dry spell. When this came along, it was great.

A: I have a book to do with Neal Porter again—I work mostly with him—called Moonlight. It’s very different thematically, and I’m doing real art, not digital art. We felt we needed to be old-school and get off the computer a little.

Moonlight is a character in the book. You go through moonlit scenes from remote parts of the world to a kid’s bedroom.