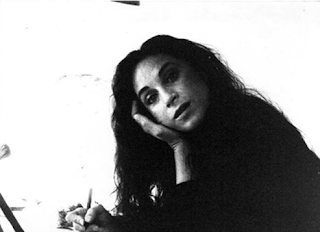 Rikki Ducornet is the author of the new novel Trafik. Her many other books include the novel Brightfellow. She is also a painter whose work has been exhibited internationally.

Q: How did you come up with the idea for Trafik, and how did you create your characters Quiver and Mic?

A: Books have a tendency to pounce. When it pounced, it came in the form of Quiver and Mic. There they were! I didn’t know they were going to fight all the time, I just knew they would be in deep space.

Q: How would you describe their relationship?

A: It’s complicated but loving. They’re so existentially compromised that they can’t help aggravating each other. It’s so much about the body—how to be a gizmo, how to be gestated from an envelope and still be human. 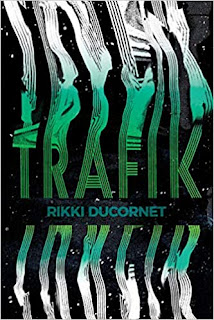 Q: The Kirkus Review of the book says, “Carried along by the bumptious rollick of its language, this tale is full of sound and fury, signifying literally everything.” What do you think of that description?

A: I loved it. I’m delighted with the entire review—it’s beautifully done and deeply attentive. It’s so much about language—as a writer, you’re in for your own wild ride.

A: One of the things that happened unexpectedly is that readers are telling me, despite the thread of sadness, that the book made them laugh and be happy, especially in the time of Covid. I began with a deep concern, a feeling of loss and alienation. When these two critters showed up, I fell in love with them, and began laughing. That good energy allowed the book to happen.

Q: So the process was really organic.

A: Any book I’ve written was organic. My first novel—this is my 10th—came about because of a dream. It mysteriously released so much energy that I wrote four books over a 10-year period!

Q: Can you say more about the balance between sadness and humor in the book?

A: It just happened. I work very rigorously and thoughtfully, but I’m responding rigorously to what’s surging forth. If something takes hold and has its own energy, I need to stay within the zone where it’s true to the energy.

When I taught writing, I would try to create a space so [the students] could have the same experience, and not think about the marketplace or anyone’s expectations. It’s so exciting when that happens.

A: A book called The Plotinus. It’s the name of a robot. It’s my Covid book, and will be coming out with Coffee House Press in 2022. It was a kind of haunting—I woke up in the morning with a voice, and felt I was in good hands. I loved that name for that robot.