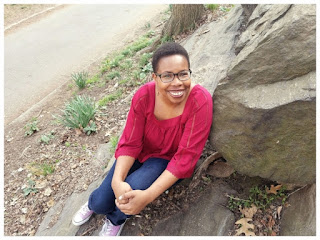 Olugbemisola Rhuday-Perkovich is the author of It Doesn't Take a Genius, a new upper middle grade novel for kids. The book was inspired by the 2019 film Boy Genius. Rhuday-Perkovich's other books include Two Naomis. She is based in New York City.

Q: What inspired you to write It Doesn't Take a Genius?

Q: The Kirkus review of the book says, "The cast of characters is fully realized, distinct, and absolutely lovable, and E’s journey will resonate. An exceptional novel with broad appeal." What do you think of that assessment, and how did you create your cast of characters?

A: I'm very grateful for it! I so appreciate a reviewer who has so clearly spent time with a book with its intended audience in mind. 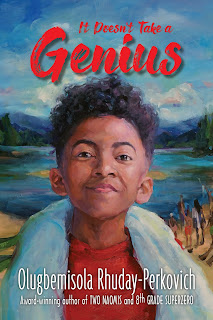 I love creating characters. Dialogue and character are my favorite parts of writing (along with revision), and the main things that get me through the dreaded first draft. I always see my characters in their communities from the start, those communities help fill out the picture of who the main character is -- so the "supporting cast" is equally as important to me. And it's just so much fun!

Q: Much of the novel takes place at a summer camp. What appealed to you about that setting, and was DuBois based on a particular camp?

A: I really wanted to give Luke and Emmett a space where they could be wholly themselves, "free within themselves" as the Langston Hughes poem goes, to be allowed to have the full emotional lives that often Black characters don't get to have in widely available stories.

And as Black children in particular have been through a challenging few years, I wanted to offer a space of joy and reflection and fun. A space for them to be Black without apology, to be joyful in all of the different ways that children and teens can be.

Since the film ends toward the end of a school year, I was thinking about summer from the beginning. I thought back to a camp that I'd attended when I was in middle school, and then researched a number of different camps and summer schools across the country.

A: I always hope that readers find whatever they need in a story, and sometimes that can change upon multiple readings. It's one of the best parts of getting to talk to readers in classrooms, libraries, and book clubs, or reading their letters. I love that each person makes their own meaning, and brings something unique and special to a story that makes it something new.

A: A lot! I'm writing a few books now, from picture books to young adult, and I'm working on something for TV.

In 2022, I have a middle grade coming called Operation Sisterhood, a nonfiction book about the climate crisis called Saving Earth: Climate Change and the Fight for Our Future, a picture book biography called Mae Makes a Way, and my young adult debut, You’re Breaking My Heart.

A: I'm so grateful for all of the readers, educators, bloggers, and bookpeople who offer time and energy to championing the enduring power of children's literature! Books have always been a lifeline for me, and the kidlit community is a beautiful one; I'm thrilled to be a small part of it. Thank you!