Brady Hammes is the author of the novel The Resolutions, now available in paperback. His work has appeared in a variety of publications, including Michigan Quarterly Review and Guernica. Also a documentary film editor, he is based in Denver.

Q: What inspired you to write The Resolutions?

A: I’m the eldest of three boys. My mom is one of nine children and my dad is one of seven.

I’ve always been fascinated by siblings and the way your relationship with them changes over time. When you’re young, they’re a constant and occasionally annoying presence in your life. But as you grow older, those relationships - at least in my experience - change. It’s not a loss of love, but of a kind of childhood closeness.

As an adult, we form different bonds - husbands, wives, partners, children - and your siblings can sometimes take a back seat. If you’re living in different parts of the country, they become faces you see once a year around the holidays, maybe a phone call placed on a birthday.

With the book, I wanted to acknowledge that drift, while also inventing circumstances that would return them to their youth.

Q: The Kirkus Review of the book says, "It almost feels like some kind of novel-writing challenge—can you come up with a plot that brings together ballet in Russia, elephants in Africa, and unemployment in Hollywood? Hammes’ debut proves he can do just that..." How did you create the three Brennan siblings, and how would you describe their family dynamics? 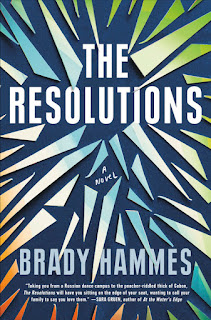 A: I wrote the characters that I was interested in reading about.

With Sam, I’d been a fan of ballet for a while and thought it would be fun to write a character who is both emotionally and geographically isolated.

Jonah is sort of in a similar situation in Africa. I’ve always loved elephants and saw a 60 Minutes program about a team of researchers studying elephant communication in the forests of West Africa. I just ran with that idea.

As for Gavin, I've spent the last 20 years working in Hollywood, and after vigorously researching the other two characters, I wanted to write about something a little closer to my personal experience. The character certainly isn’t autobiographical, but his disillusionment with the entertainment industry is something I related to.

A: I rarely know how a story will end. It’s a lot of stops and starts and fumbling around in the dark until I arrive at something that feels earned. With The Resolutions, the ending only came into focus once I was well into the third act. I knew I wanted all three characters to be reunited, if only for a moment.

A: I would hesitate to prescribe any kind of message, but if nothing else I hope it helps to destigmatize opioid addiction.

A: I’m close to having a completed draft of my second novel. Like The Resolutions, it’s a family story but with a larger scope - beginning in 1965 and ending in the mid-‘80s. It’s an attempt to make sense of our current moment - politically and culturally - through the story of an Iowa farm family.