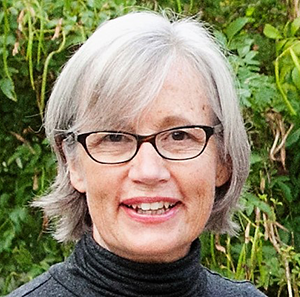 Laurie Lawlor is the author of the new children's picture book biography Fearless World Traveler: Adventures of Marianne North, Botanical Artist. Lawlor's many other books include Big Tree Down!. She lives in Evanston, Illinois.

Q: Why did you decide to write a children's picture book biography of botanical artist Marianne North?

A: I have always been fascinated by the idea that an artist, photographer, or writer can be a hero—someone who dedicates herself to selflessly explore new lands, plants, and animals in order to share what she discovers with the rest of the world.

Marianne North was just that kind of hero. She broke rules in the way she painted and how she explored an amazing range of tropical plants—some of which were unknown by European scientists at the time.

Because she was self-taught in both art and science, she took risks. A late-bloomer, she was 40 years old when she set off on a series of whirlwind journeys across oceans and rivers, through jungles, deserts, and mountains to capture an extraordinary variety of plants in their native environments.

She thumbed her nose at societal expectations about proper Victorian female behavior. Not only did she refuse to stay home, she traveled alone to remote, often dangerous places. I was hooked when I read about the time she journeyed by elephant!

A remarkable British artist and botanist, North has been relatively overlooked in the United States—even though she has had one of the longest running, one-woman art shows in history.

Beginning in 1882, more than 800 of her vibrant paintings have been on display at a floor-to-ceiling gallery at the Royal Botanic Gardens at Kew. This tribute to her generosity, skill, and energy provides a stunning, visual tour of the world for visitors—then and now. Q: The Kirkus Review of the book describes Marianne North's story as "A life full of adventure with a lasting legacy." What do you see as her legacy today?

A: North was on the cutting edge of gathering important information fragile plants from remote, often inaccessible places. Several rare pitcher plants were eventually named for her. Sadly, several of her paintings are the last living records we have of plants that are now extinct.

An impassioned environmentalist long before such a name existed; she wrote letters and articles about the environmental devastation she witnessed: clear cutting of forests, water pollution, and destruction of native habitat that affected so many birds and other animals. Her words and her exquisite artwork provide a haunting warning for us today.

A: When I first saw Becca’s superb artwork, I was totally thrilled. She captures not only the vivid color of plants and landscape, but also the amazing array of tropical animals and insects that enthralled Marianne North. I think Marianne North would be pleased!

Q: How did you research Marianne North's life, and what did you learn that especially surprised you?

Paintings, photographs, and her massive autobiography, diaries, sketches were key. Reminiscences by people she met on her world tours were extremely revealing. Everyone seemed to see a different “Miss North.”

I love doing research.  It is my most favorite part of the process of creating a biography.

There were so many amazing individuals in her life, I wanted to include all of them. Space did not permit, however.

Other delightful surprises…I found especially revealing Marianne North’s letter from 1883 that included a rare self-portrait. Here she was, 53 years old, perched on a 30-foot high boulder deep in the rain forest of Seychelles so that she could sketch a towering coco de mer, also known as the double coconut tree.

In spite of biting flies, extreme heat and humidity, and uncertainty how she’d safely climb down before nightfall, she was determined not to waste a moment of sunlight to paint. After all, she’d traveled 5,000 miles to find this tree – and she wasn’t going to give up till she was done. That is what I call inspired and heroic dedication!

A: A biography of Beethoven’s piano maker and a fascinating investigation into how a piece of restored land is helping young students rediscover nature. Two very different projects!

I have always been very intrigued by the power of the outdoors. Going on hikes is one of my favorite activities—no matter where I am. And among my favorite hiking companions are my curious, young grandchildren and our energetic black Labrador retriever named Lulu. There’s a book there somewhere, too!

Thanks for your wonderful questions!