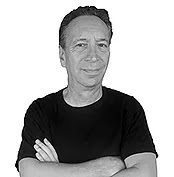 Jeff Gottesfeld is the author of the new children's picture book Twenty-One Steps: Guarding the Tomb of the Unknown Soldier. His other books include No Steps Behind. He is based in Los Angeles.

Q: What inspired you to write Twenty-One Steps?

A: There are two aspects to this question -- the general, and the specific.

The specific came from the annual visit I make to a national cemetery on Memorial Day. It's something I have been doing for years. I find it grounding, moving, and humbling.

I was at the Los Angeles National Cemetery on that day in 2016, and wandered away from the main commemoration to walk amongst the tombstones.

I saw one on which nothing more was written than "Unknown." It turns out there are several unknown soldiers buried there.

That's the specific. More generally, I saw the United States in 2016 as astonishingly divided. People found little common ground. It's more so now, I believe, and it's not good for the country.

If we cannot come together and form a more United States around the sacrifices of the Unknown Soldiers and the devotion, service, and reverence of the Tomb Guards, I think we're sunk.

But I still think we've got more common ground than many are quick to acknowledge. That thinking also inspired this book.

A: With my last book (No Steps Behind: Beate Sirota Gordon's Battle for Women's Rights in Japan (Creston, 2020) being largely set in Japan in the pre-World War II and post-war Occupation, Twenty-One Steps was a relative walk in the park to research.

Everything was in English, and most of the folks with whom I wanted to talk were still alive.

There are excellent books written about Arlington National Cemetery, and some of them focus sections on the Tomb Guards.

Then there was Ethan Morse and Neal Schrodetzki's fantastic documentary The Unknowns from 2016. Morse is a former Tomb Guard.

Once I felt educated enough to talk, I found so many Tomb Guards who were willing to help me and [illustrator] Matt [Tavares] make the book perfect. 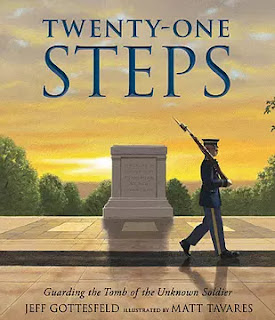 And of course, winning the support of the Society of the Honor Guard, Tomb of the Unknown Soldier (www.tombguard.org) was an affirmation that I was on the right track, and the best guarantee that if I wanted to make the book as close to perfect as possible, I could.

Among the wonderful things I learned was the timing for the book was ideal, as 2021 marks the centennial for the Tomb, and there's to be a major convocation in Washington D.C. in November to which I've been invited to speak. Yes, I'm nervous.

Candlewick held publication to coincide with the anniversary, and it was a super-smart decision.

I also learned that the Tomb Guards are all enlisted soldiers at the time they assume their duties. They are not officers. I learned about the selection process for the Unknown soldiers themselves -- how they were selected to ensure that they were absolutely unknown.

Finally, I was pleased and amazed to discover that the Tomb Guards historically has represented a broad cross-section of Americans, and also that there have been Tomb Guards from Native nations.

Q: What do you think Matt Tavares's illustrations add to the book?

A: Matt's art is breathtaking. This is a visual story, and peers into worlds that most readers do not know: combat, the loneliness of a faded photograph of a veteran on the mantle, a sweeping view of Arlington National Cemetery, inside the Tomb Guard quarters, and the Tomb at various times of day and night, in all kinds of weather..

Matt's detail is amazing. Look closely at it. In fact, the only thing that is sometimes not so detailed are the faces of the Tomb Guards and soldiers, because their specific identities are not so important in the context of their service.

I also invite readers who have the physical book to remove the cover jacket and look at what Matt did on the book itself. You'll be wowed.

A: The Unknown Soldiers made the ultimate sacrifice. They died nameless and faceless for the United States of America.

We have no idea who they were -- if they were white, Black, Latino,  of a Native nation, Asian-American, multiracial, Jewish, Christian, atheist, Muslim, conservative, liberal, apolitical. It is irrelevant in their death and symbolism. Their families and communities also made enormous sacrifices.

The Tomb Guards give up to two years in devoted service to the Unknowns. Their identities are irrelevant in their service and symbolism. If Twenty-One Steps can get readers imagining the values it takes to serve, and maybe even incorporate one or two of them into their own lives, I'll be happy.

A: I have a nifty book coming out in the autumn called The Christmas Mitzvah (Creston, September 7, 2021), illustrated by Michelle Agatha, inspired by the true story of unsung hero Al Rosen (not the baseball Al Rosen, the door-to-door salesman Al Rosen circa 1970) of Milwaukee, Wisconsin.

And I'm very fond of a manuscript I'm perfecting now about the Western Wall in Jerusalem, and the centuries-old tradition of inserting prayer notes to God into its cracks. This is a tradition embraced by people of every and any faith who visit it.

A: Memorial Day is coming soon. Find a national cemetery near you, and visit it on that day. You will be glad you did. If you're at the Los Angeles National Cemetery, maybe I'll see you there.