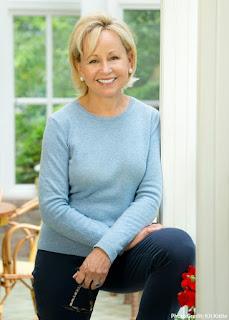 Deborah Goodrich Royce is the author of the new novel Ruby Falls. She also has written the novel Finding Mrs. Ford. She also has worked as an actress and a story editor. She lives in the Northeast and in Florida.

Q: What inspired you to write Ruby Falls, and how did you create your character Eleanor?

A: The interesting thing about the genesis of Ruby Falls is that the first two chapters downloaded into my brain one day when I was planning to write a different book. It was at the moment when my first book, Finding Mrs. Ford, was finished (ish!) and was out to publishing houses.

I was on my way to dinner with friends when the initial chapter of little Ruby’s abandonment in Ruby Falls Cave, and the subsequent chapter 20 years later when she is the  actress, Eleanor Russell, on her honeymoon in Rome…that much of the plot simply appeared.

From there, of course, I had to write a book, which meant another few years of diligence!

Eleanor is a very complicated character. Like all good gothic heroines, she is young, vulnerable, and attracted to a tall, dark stranger who may or may not have her best interests in mind.

But those are all exterior trappings. The creation of Eleanor/Ruby is rooted fully in her initial trauma in the cave. Writing a character is very much like playing one as an actor. Since I used to be one of those, I use the same method as a writer.

We, as human beings, have access to the full tool kit of human emotions. So, if you are writing a character who is experiencing something you have not (for example, though I did visit Ruby Falls with my parents, they did not leave me there!), you have to draw on a situation where you have felt anxiety or fear or whatever else you think that experience would evoke. And then build from there.

Q: The Kirkus Review of the book says that “the works of author Daphne du Maurier and filmmaker Alfred Hitchcock loom large over Eleanor’s plight, as does that of Shirley Jackson, the writer of The Haunting of Hill House. What do you think of that assessment? 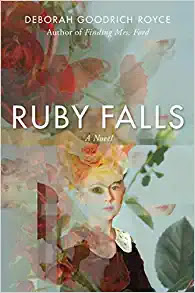 A: Beyond feeling extremely honored by this assessment, I would say the reviewer is spot-on in naming the literary and cinematic references I was playing with in Ruby Falls. For, when we create, we are, indeed, playing in the best sense of the word.

There are no new stories. Everyone says that, many more eloquently than I just did. There are the basic stories of love and lust and anger and jealousy and desire and fear and so on.

Rather than being defeated by the thought that you are not going to reinvent the human animal, it is so much fun to play with what exists already!

Ruby Falls is both a psychological thriller and a work of gothic fiction. It takes du Maurier’s novel (and Hitchcock’s film) Rebecca as a point of departure for a flight of fancy down what becomes a somewhat different (and I hope surprising) rabbit hole.

In terms of The Haunting of Hill House, I have read others of Jackson’s works but not this one. And I need to do it ASAP, since several reviewers have compared Ruby Falls to it.

A: I did NOT know how Ruby Falls would end for the longest while!

Because Ruby was abandoned in the cave by dear old dad, much of her obsession revolves around what happened to her that day. Why would her father do such a horrible thing? Why would he  leave her in this terrifying way? Ruby goes down many avenues in search of an answer.

Because that seminal event took place in the 1960s, she becomes fixated on various conspiracy theories of the time—many revolving around the Kennedy assassination—in search of an explanation for her father’s behavior.

In the end, I chose to resolve the question of what happened to Ruby in the cave in the manner I think makes the most sense for the integrity of character and plot.

A: First of all, I hope readers have a rip-roaring romp with Eleanor through the winding roads of the Hollywood Hills. Places like Los Angeles are sunny and bright.

But, I think it was Carl Hiassen who said, in describing Florida, it can be a sunny place for shady people. I want readers to feel in their bones that tension between a sparkly surface and what lies beneath it.

Beyond the gothic mood, I want readers to think about how we all deal with those events of our childhoods that make such a mark on us. How do we move on? Why can some people do it while others can’t?

A: Right now I am polishing up edits on a book called Reef Road. I began it a year ago, when the pandemic was sealing us in our houses and leaving us with a very deep sense of foreboding.

I had been on a book tour in Florida for the paperback release of Finding Mrs. Ford when the moment  came in mid-March making it clear we all needed to freeze in place. So I sat where I was in Florida and got to work on something that had been percolating in my head for a long while.

Reef Road is a psychological thriller with elements of noir. And, as always for me, it is a deep dive into questions of identity. Who are people, what do they reveal, and—far more interestingly—what do they conceal?

There is a double narrative in the book. In one, we follow a lonely writer researching the murder of her mother’s best childhood friend—which is an unsolved crime—and unsolved murders in general.

In the other narrative, we follow the story—which is laid out in chapters like a novel within a novel—of a young, married woman whose husband and children disappear in the middle of the most shut-down days of the pandemic. How these stories intersect is part of the puzzle.

A: I like to talk about my crazy life journey from actress to story editor to wife and mother to historic preservationist to author as a way of reminding others that this life is rich and—for the lucky among us—it can be long.

There are so many chances to reinvent ourselves creatively. Young people often worry that if they don’t fulfill a dream in youth, it will be lost to them. I am here to tell you that this is not always the case. Try something. Then try something else. You may surprise yourself by your own trajectory.