Emily Midorikawa is the co-author, with Emma Claire Sweeney, of the new book A Secret Sisterhood: The Literary Friendships of Jane Austen, Charlotte Bronte, George Eliot and Virginia Woolf. Her work has appeared in a variety of publications, including The Daily Telegraph and the Independent on Sunday. She teaches at New York University London.

Q: How did you and Emma Claire Sweeney decide to write this book together, and what did the writing process teach you about your own friendship?

A: Emma and I had been friends for well over a decade when we first began to talk about writing something about female literary friendship.

We'd realised that, while we'd heard about the famous male partnerships - Wordsworth and Coleridge, Byron and Shelley, Hemingway and Fitzgerald - with one or two exceptions, we didn't know whether the best-known female authors of the past relied on fellow women for literary support.

Since, by then, we'd become used to leaning on each other as writers, we were curious to investigate.

We began by sharing our research in feature articles for British newspapers and magazines. Later, we set up a website, Something Rhymed, which profiles the literary friendships of (usually) historical female authors. Eventually, we felt that we wanted to explore a few of these relationships in far greater detail, and so the idea for the book was born.

Writing together has been a richly rewarding experience, but at times work on our joint book has ended up overshadowing all other aspects of our friendship. We've had to learn to carve out time for socialising, and just enjoying being friends.

Q: You explore the friendships of four different pairs of women writers. Did you see common threads among their experiences? 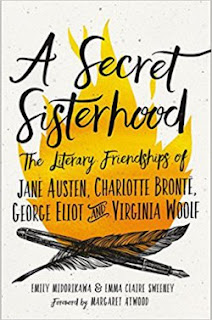 A: In each of these relationships, there was often a startling level of candour, and this continued even in cases when one writer achieved a far greater level of recognition than the other.

Jane Austen's literary friend, the amateur playwright and Austen family governess Anne Sharp, continued to give Austen honest critiques of her work well after her novels had become celebrated by the likes of the Prince Regent.

And Mary Taylor, future author of the feminist novel Miss Miles, sent an astonishingly frank critique of Jane Eyre to her friend Charlotte Brontё, criticising it for its supposed lack of political purpose.

Tellingly perhaps, Brontё would make her next novel, Shirley, more overtly political. Brontё even included a tribute to Taylor within its pages, fictionalising her as the forward-thinking character, Rose Yorke.

A: Emma and I get asked this quite a lot, and it seems to us that the most significant differences are - not so much in the actual workings of the friendships - but the way in which they have tended to be remembered.

Fellow Modernists Katherine Mansfield and Virginia Woolf, for instance, shared a genuinely close bond that is too often remembered only as a bitter rivalry.

Certainly, their complex relationship involved a fair amount of friction, but the same could be said of all the celebrated male collaborations.

But Hemingway and Fitzgerald, say, are generally thought of as rambunctious comrades, the similarly combative Woolf and Mansfield are largely written off as sworn foes. It seems that, even today, we often still struggle to accommodate rivalry into acceptable notions of female friendship.

A: In addition to reading / re-reading the literary works of the writers featured in A Secret Sisterhood, Emma and I spent a lot of time looking at archival sources - such as original letters and diaries. We also visited the homes and other places associated with the writers, and read many published works about their lives.

One highlight of the research process was the experience of transcribing a collection of original letters from Harriet Beecher Stowe to her friend George Eliot, a significant portion of which have astonishingly never made it into print.

We also discovered two lost Austen family documents in hidden pockets of her niece's 200-year-old diaries! This was particularly exciting for Emma and me as they revealed new details about the household theatricals of Austen's friend Anne Sharp.

A: I'm working on another historical non-fiction idea, and so I'm doing a lot of research once again. It feels great to be back spending many hours poring over old documents, but strange to be doing this on my own this time without Emma.

Luckily, after over a decade-and-a-half of friendship, I know that - even though our next projects will be separate ones - neither of us will be going it entirely alone.

Emma has already given me a great deal of helpful feedback on my new idea, and I hope it won't be too long before she begins to share drafts of her new novel's chapters with me, because I really can't wait to read them.