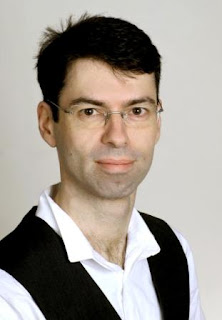 Thomas de Padova is the author of the new book Alone Against Gravity: Einstein in Berlin: The Turbulent Birth of the Theory of Relativity, 1914-1918. A physicist, he has written many other books focusing on science. He lives in Berlin, Germany.

Q: Why did you decide to write this book about Albert Einstein during World War I?

A: During World War I. Einstein transformed from being a “pure” physicist into a pacifist and politically engaged scientist and crowned his General Theory of Relativity. Above all, I wanted to know what provoked this transformation and how in the same time he accomplished to revolutionize our understanding of space and time.

Q: How did you research the book, and what did you learn that particularly intrigued you?

A: It particularly intrigued me, how fast the outbreak of World War I. changed the activities and minds of scientists like Max Planck or Fritz Haber.

Therefore, one of the most difficult parts of my research was to get an idea of Einstein’s relationship to his German colleagues, especially Haber. In 1914 the chemist Haber had done everything to make life comfortable for his new Berlin colleague and his family. Einstein had his office in Haber’s institute, his apartment nearby.

To give an example how thankful Einstein was to Haber: The great scientist gave private lessons in mathematics to Haber’s 12-year-old son Hermann for three months. 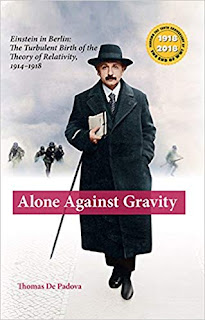 However, Einstein gave up his office in Haber’s institute and moved away from Berlin-Dahlem as soon as the director’s preparations for the chemical warfare started. Their correspondence, lively before, almost stopped.

From 1915 to 1918 the two scientists did not meet anymore in the German Physical Society or the Prussian Academy of Science, because Haber did not participate in such proceedings and conferences during the war. They frequented completely different social and political circles.

What motivated them? At which point could they have made a different choice? Posing such questions, I learned a lot about the role of German scientists in World War I. and Einstein in particular.

Q: During the 1914-1918 period, how famous was Einstein, and what was his reputation at the point, both scientific and political?

A: In the scientific world, Einstein already enjoyed the reputation of being the most significant physicist of his time. Max Planck called him the "new Copernicus." He himself registered with some wonder how rapidly news of his revolutionary worldview spread in Berlin and beyond.

Nevertheless, during the war only a small fraction of physicists, astronomers and mathematicians payed attention to his new achievements. Among them were the British scientists Frank Dyson and Arthur Eddington.

Enthralled by general relativity, they started to prepare for an expedition to test Einstein’s theory during an eclipse predicted for May 1919. A really remarkable scientific project in the midst of war.

Politically, Einstein in Berlin felt “alone, like a drop of oil on water, isolated by attitude and cast of mind” as he expressed in a letter. It took some months, until he started to frequent the meetings of pacifist organizations.

His persistent advocacy of peace and democratic ideals augmented his popularity, even though it was seen as “naïve” by many of his colleagues. When in fall 1918 new democratic parties were founded in Germany, Einstein’s name was expected to provide a strong political backing. He could do little against the misuse of his name in political campaigns in newspapers.

Unfortunately, even 100 years later some of Einstein’s biographers used his supposed partisanship for the “Deutsche Demokratische Partei” or the “Demokratischer Volksbund” insisting again on his “naivety” regarding political questions.

Q: Can you say more about how well Einstein got along with other leading scientists of the time?

A: Einstein first of all was a physicist, who needed discussions with other scientists to develop new thoughts and concepts. He could be sharp in his judgments and in the same time humanly tolerant. This unusual mixture led to long lasting relationships with people like Max Planck, even though Planck badly disappointed him from a political point of view.

A: I just started to work on the history of mathematics.

A: People often ask me about Einstein’s famous letter to President Roosevelt in 1939, warning that Germany might develop atomic bombs.

The period 1914 – 1918 is crucial for the understanding of Einstein’s political activities in the United States. Einstein had seen what German scientists were capable of doing in World War I., when his friend Haber transformed a small science institute into a facility for chemical weapons of mass destruction.