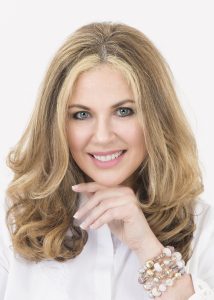 Deborah Vadas Levison is the author of the new book The Crate: A Story of War, a Murder, and Justice. She has worked in public relations and as a freelance writer. She grew up in Ontario and lives in Connecticut.

Q: Why did you decide to write this book, and how long did it take you to finish it?

A: This wasn’t so much a matter of me deciding to write a book, but more a matter of a book clamoring to be written. Never in a million years would I have guessed The Crate would be my first book.

Back in 2010, when I first received a surreal phone call from my brother telling me there had been a murder – whaaaat? – my world flipped upside down.

My brother had discovered a wooden crate, nailed tightly shut and almost hidden from view in the dark underbelly of our lakeside cottage north of Toronto. We weren’t prepared for the horrific contents of the crate… contents that revealed an act of extreme violence.

The discovery sent our family reeling. My brother became a murder suspect. My husband and I were totally freaked out. We had three young children to shield. My elderly parents were traumatized. Our property became a crime scene and media headlines blasted the news across the country. We felt shocked, terrified, violated.

But once police released the details of the grisly crime, I began to think less about our own circumstances and more about the victim, someone whose family would be left devastated and grieving. Someone who had suffered the worst possible fate.

The #MeToo movement and other global platforms give people who have suffered a chance to share their experiences. But what about those who can no longer tell their own stories? Eventually I realized I had an opportunity to give a voice to one victim, to tell her story so that she wouldn’t be a forgotten statistic. 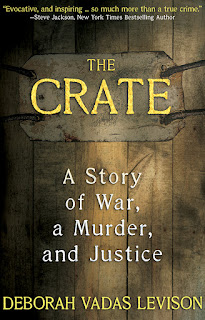 At the same time I began to think I could tell my parents’ stories, too. You see, they’d both survived the Holocaust and part of their horror at the discovery stemmed from the fact they thought they were safe in their little sanctuary in the woods; they’d never expected to encounter such evil again in their lifetimes.

All of these were stories that needed to be told. The “crate” became both literal and metaphorical, in terms of its contents. How could I not write this book? Once I started, it took about a year and a half to complete.

A: Very, very little. Even though my parents never talked about the past, I always sensed there was some sort of a shadow over our lives, something that separated us from other “normal” families.

Living in our house was this weird combination of both walking on eggshells and being mired in guilt. My brother and I felt this suffocating pressure to be happy and successful in place of relatives who’d died, relatives whose names we didn’t know.

Only as a young teen did I finally start finding out about the shadow. I was 13, the same age as my mom during the Nazi invasion, when I caught glimpses of a TV miniseries about the Holocaust.

All the snippets of information I’d absorbed throughout my childhood, the comments and wisps of memories, began to coalesce into a portrait of what I imagined might have happened to my parents.

Much later in life, my parents recorded videotapes as part of Steven Spielberg’s Holocaust Foundation, in which some 52.000 survivors and witnesses, from over 60 countries in over 40 languages, gave testimony to what they’d experienced and saw. Spielberg archived all the footage to preserve it and use as an educational tool. In 1997 I watched my father’s video and learned for the first time exactly what he’d been through.

Q: The book includes many difficult topics. How hard was it to write, and how do you think writing the book affected you?

A: There’s a great deal of vulnerability in any sort of memoir, and this one is no exception. But the themes of the book – hatred and intolerance, domestic violence, anti-Semitism, xenophobia – are ones that our society is grappling with right now, so I’m glad to be able to shine a light on them.

I feel a tremendous sense of responsibility in writing about the Holocaust: as there are fewer and fewer survivors left to tell their own stories, I think it is incumbent on the second generation to help preserve them for the world to remember what happened.

The voices of Holocaust denial are loud, especially on the Internet. We have to counter with education and remembrance.

And, like any other true crime writer, I hope I adequately expressed the sadness and pain of the events surrounding the murder. I tried to be sensitive to the people affected by the ordeal.

But I also think I could have edited it forever, finding better words and images to capture the fragility of life.

A: Of course, my kids complained: “You gave her more dialogue,” and so on. But I think later in life they’ll be happy to pass down the history of their ancestors and of our cottage to their own children.

Most importantly, I think my mother is gratified to know that her life story, and the story of her loved ones, has been honored. And I hope that the victim’s mother feels the same way.

A: I wrote a romance back in the ‘90s but somehow, between having three kids, moving from Canada to Connecticut, and building a career in journalism and public relations, it got “shelved.” I plan to update it, make it a little less cheesy, and see if it goes anywhere.

After that, I’d like to go back to the thriller genre. I have a budding idea for a fiction based on true events from the ‘70s and ‘80s that I want to start writing later this summer. Stay tuned.

A: I’m especially excited that The Crate has been released in audio. The narrator, Cassandra Campbell, has been called the “Meryl Streep of the audio world” – she’s won every award possible and recently was inducted into the Audio Hall of Fame for her work on projects like Orange is the New Black, The Help, James and the Giant Peach, etc.

She does a great job with the Hungarian accents and phrases in the book, and animating the characters with nuances of her voice.