Crystal Hana Kim is the author of the new novel If You Leave Me, which focuses on the Korean War and its aftermath. Her work has appeared in a variety of publications, including The Paris Review and Nylon. She lives in Brooklyn.

Q:  You note that in writing this novel, you “wanted to skew from the traditional male-centered war narrative and focus on what happened to the women left behind.” How did you come up with your character Haemi?

A: All four of my grandparents survived the Korean War, so I grew up learning bits and pieces about this terrible history.

I’m particularly close with my maternal grandmother, who had to flee her home with her widowed mother at the start of the war. I always loved how loud, independent, and unrelenting she was, so when I began writing, I wanted to have a similarly fierce heroine as the central figure of my novel.

I’m also deeply interested in gender, femininity, and society, so I wanted to investigate these constructs while also considering the trauma of war for the women who were left behind.

A: I did a lot of different types of research for If You Leave Me, which I hadn’t initially expected when I began writing during graduate school.

I conducted interviews with my grandmother and aunts; I read historical and political texts; I read sociological studies; I watched documentaries and movies; and I studied a lot of photographs of civilian life during and after the Korean War. 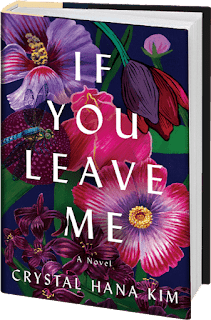 I then tried to incorporate all of this research as fluidly and unobtrusively as possible into the novel so that the reader would learn about this period of time without the text feeling didactic.

Q: You tell the story from several characters’ perspectives. Did you write the novel in the order in which it appears, or did you focus more on one character and then turn to another?

A: The way this novel came together is a bit convoluted! I was actually working on an interconnected short story collection that spanned three generations when in graduate school. Haemi, Jisoo, and Kyunghwan were the characters from the first generation.

In my last semester, my workshop teacher convinced me to focus just on the first generation. So, I had a few chapters from the beginning, middle, and end already written when I decided to restructure the work into a novel. Those chapters were all told from different voices. Then I had to write the chapters in between.

Q: You note that you’re in touch with your grandmother, who lives in South Korea, and that she’s uneasy. What do you think about the current situation in Korea, and what do you see looking ahead?

A: My grandmother grew up when Korea was one country and under Japanese rule. She then experienced five years of independence before The Korean War began. Her homeland has always been under duress.

She’s uneasy because she would love to see Korea reunited before she dies. Do I think that will happen? I’m not sure. I was in Korea with her when the Inter-Korea Summit happened though, and that summit provided my grandmother with a lot of hope.

A: I’ve started a second novel! It’s too new for me to discuss, but I’m very excited about it. I’ve also been writing essays and book reviews, which has been a wonderful way for me to grow as a writer.

A: I wrote Haemi Lee as a complex, difficult woman, and I hope that readers will root for her to the very end of If You Leave Me. I’d also love to hear from readers in person, so I’ll attach my website with events information here.

Thank you so much for your thoughtful questions, Deborah!