Q&A with Cozbi A. Cabrera 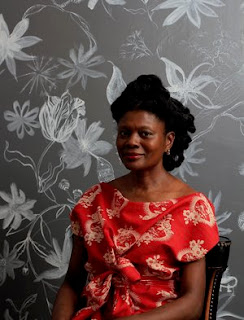 Cozbi A. Cabrera is the author and illustrator of the new children's picture book My Hair is a Garden. She has illustrated several children's books, and has been an art director and a clothing designer. She also makes muñecas, collectible cloth dolls. She lives in Evanston, Illinois.

Q: How did you come up with the idea for My Hair is a Garden?

A: On any given day in New York, women would stop me on the street to ask about my hair – how did I handle it, what products did I use, etc.

In the ‘80s and ‘90s, it was primarily professional women who thought natural hair wasn’t a match for work demeanor, yet felt stuck. Their damaged hair signaled the end of the road for relaxers, yet they felt limited by styling options for natural hair. My mod suit and natural hair were not in conflict!

In the early 2000s more mothers approached me. The trend was to keep children’s hair natural up to a point, then opt for straighteners for ease of handling or rite of passage. Occasionally, it’d be an adoptive mother with a child of color who didn’t know where to begin handling extremely curly hair.

So My Hair Is A Garden grew out of all that questioning. I wanted it to reinforce the mindset that cultivating anything approached with love and respect requires patience and brings joy.

Q: Did you work on the illustrations first, or the text—or was it simultaneous?

A: My publisher signed for the text. They were going to assign it to someone else to illustrate, then thought to ask me if I would do it. So I did. Again the angst, true of most illustration projects – to capture a fraction of the lovely images floating through my head and somehow translate them with the limitations of paint!

A: I hope little black girls will walk away with a sense of pride and appreciation for their God-given characteristics. There’s a message that’s sent to little girls of color that beauty is characterized by long flowing hair, keen features, and yes, lighter skin. Without these characteristics they are excluded from celebrating beauty.

Older children tease each other relentlessly as they practice stratifying, categorizing and creating community. Unenlightened, untaught, unchecked they’ll go as far as “othering” or exhibit cruelty. 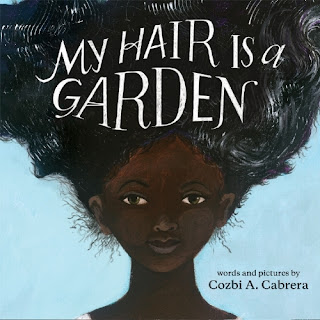 In any group of little people, we find most have kindness written in their hearts and are pricked by cruelty. Sometimes they lack the boldness to intervene.

Some grown women have purchased the book, feeling it’s a message they didn’t get growing up, one that feeds a portion of their souls that wasn’t nourished and cherish the book for that reason. I get it.

A: I love Gabriel Garcia Marquez, Toni Morrison and Isabel Allende. They engage in a telling that transcends the limits of language. They construct a world and the waters surrounding it, then people that world, like creators.

I admire some of the work of David Foster Wallace. I marvel at his granular, detailed depictions – the ballseyness in having no compunction in taking up the reader’s time and the power to serve up keen insight and observation.

I’ve watched Tayari Jones in editing mode, scratch out entire segments without remorse or attachment, determined to tell it better.

I’ve cried over passages in Barack Obama’s Dreams From My Father, thinking what an insightful human being, crestfallen when I learned this same man was running for senator –how could such a stupendous human being become a politician! Little did I know there was more inspiration in store.

For YA it’s Jason Reynolds and Renee Watson. Zetta Elliott persists with and without “support.” Her creativity and proliferation isn’t based on acknowledgement. She has stories and she’s telling them.

My daughter lived with Rita Williams Garcia’s characters the better part of the summer and cried at the end of the trilogy, unwilling to let her intergenerational companions go.

Kidlit: still pricked by the transparency and honesty of Judy Blume.  The humor and lack of condescendence of MaryRose Wood.

My cherished picture book volume is of vintage photographs and verse by Walter Dean Myers entitled Brown Angels. I purchased it many years before my daughter was born and read aloud the entire book each night since she was a baby. Once the book was memorized, we would recite it in the dark, its sentiment and cadence like bath water for that baby. It’s a treasure.

A: I’m completing the illustrations for a book about the life of Gwendolyn Brooks written by Suzanne Slade (Abrams Books 2020).

The research for it was eye-opening, as Ms. Brooks lived in a community called Bronzeville. These square miles of rich history and overcrowding are where Blacks had to settle during the Great Migration because housing covenants would not allow landlords to rent or sell to persons of color outside of that constricted area. She quietly and powerfully made lemonade.