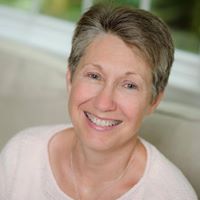 Q: You played a role in a summer school production of The Music Man as a kid--how did that experience inspire you to write Upstaged?

A: In the summer before fifth grade, I played Mr. Jacey Squires, and I clearly remember the feeling of wearing a stick-on a mustache, and singing arm in arm with three sweaty boys.

But I wondered, what if this happened to someone a little older, a seventh grader who loves to sing, but is so shy, she doesn’t even want to try out? And what if she were also asked to understudy the leading lady?

I added the Blue Marauder pranks to add some mystery, and I’ve been happy to hear that guessing his or her identity has been the subject of great discussions among readers.

Q: The Kirkus Review of the book says, "Shira’s shyness is not portrayed as a flaw but as a hurdle the circumstances she’s thrust into force her to overcome." How did you create your character Shira, and what do you think of that description of her shyness?

A: That was so perceptive! In fact, my editor and I discussed the idea in depth, that shyness is a characteristic, not a flaw.  I tried to allow Shira to step out of her comfort zone and find her courage without fundamentally changing the person she is. 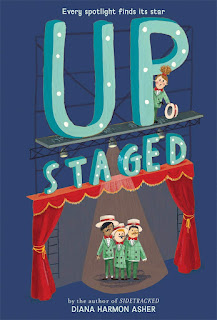 Even as an adult, I’m amazed by—and often envious of—people who have the confidence to wear or do something outrageous, people who don’t care what anybody thinks. But the “dance like no one’s watching” gene seems to have skipped me.

I identified with Shira and wanted her to be a heroine who’s okay with NOT being the loudest, most confident one in the room.

Today, so often strength seems to be measured by visibility and volume—volume, both in the number of views or hits or followers, and literally, being loud and dominant. I hope Shira’s story shows that you can be introverted, but still be brave and talented and strong.

Q: We discussed this idea in our previous Q&A, but with this book, did you know how the novel would end before you started writing it?

A: I had a pretty good idea about the ending I wanted in terms of the show, Shira’s relationships and her character growth.

But Cassie’s story developed a great deal as I was writing the book. She has her own story arc, her own insecurities, and that developed into a very satisfying storyline.

Paul’s character also grew, and the mystery element of the Blue Marauder took some twists and turns, before ending up just where we wanted it.

Q: You've written two novels about seventh graders--what is it about that age that appeals to you?

A: It’s almost a cliche to say that seventh grade is when kids are figuring out who they are, who they want to be, but most teachers and parents can attest to the truth of that. Friendship is also such a huge part of kids’ lives at that age, and I love writing about friendship.

But writing about 12 and 13 year-olds also means writing for 8 to 13 year-olds, and they’re a great audience. I feel like there’s still some innocence in the way they view the world. At least I hope that’s still true!

It’s a time when it’s important for them to understand that there can be much more to a person than appearances suggest.

It’s also a great age to read a book and say, “I’m like that, too! I’m not alone in feeling that way.” (Come to think of it, it’s always a good age to get that reassurance, isn’t it?)

A: I’m reworking a manuscript that I started years ago. It draws on my own experience of losing my father, and how horrified I was watching my mother start dating. My main character is also thrown in with a group of kids who are out of her usual social orbit.

It returns to a theme I seem to gravitate toward— how peer and societal expectations weigh on us, how we form opinions about other people before we really know them. I try to tell every story with humor and honesty, and I hope this will do that as well.

A: Much as I think theater-loving kids will enjoy Upstaged, I didn’t set out to write a book specifically for them, just as I didn’t write Sidetracked just for cross country runners or kids with ADD.

But theater and music are such terrific vehicles for helping kids grow. They have enormous powers, just as cross country does, to bring people together as a team and allow them to achieve something they never thought possible.

Drama especially allows someone to step outside of themselves. As Shira says when she first rehearses as Marian, “I’m not really me, but I’m not pretending, either. It’s some free space in between.”

I hope I can keep finding those free spaces for my characters, creating friends and situations that challenge them and help them to grow.