Q&A with Allison and Wayne Marks 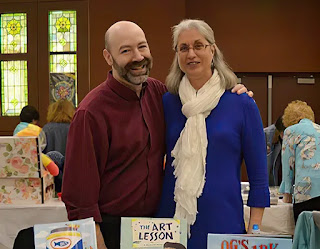 Allison and Wayne Marks are the authors of the new middle grade novel Benny Feldman's All-Star Klezmer Band. Their other books include the picture book The Art Lesson. They live in Akron, Ohio.

Q: What inspired you to write Benny Feldman’s All-Star Band, and how did you create your character Benny?

A: PJ Our Way, an organization that sends books to Jewish children around the world, had mentioned that there was a lack of Judaic-content middle-grade novels with male protagonists. We had noticed this as well.

At the time, we were pondering several ideas too broad to fit within a 32-page picture book—one of them being about a talented young fiddler who is passionate about klezmer.

The chosen instrument made sense because Wayne has played the violin in bands for many years, often suggesting klezmer tunes to the other musicians.

Many questions followed: Can we make klezmer exciting for kids? How can we blend in the history of klezmer without bogging down the story line? What obstacles can we throw in the main character’s path?

Drawing from our own experiences attending middle schools in Ohio, we decided to focus Benny’s angst on the kinds of troubles that universally haunt children: teasing, first crushes, strained friendships, and feeling like a square peg in a decidedly round-hole environment.

For our hero’s primary hurdle, we gave him the task of assembling a klezmer band in a few months to compete in the school talent show (think The Blues Brothers without the car wrecks).

The diverse group of musicians he eventually recruits highlights the book’s main theme, stated by Benny’s mentor, Uncle Maxwell: “All music is connected . . .  and music connects us all.” 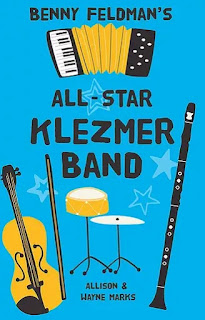 A: As with all of our books, lengthy plot discussions took place about Benny Feldman’s All-Star Klezmer Band, usually over morning coffee, before we committed paragraph one, chapter one to the page.

Still, we never begin any story, whether a picture book or a middle-grade novel, knowing every angle of the story, unlike how, say, the Coen Brothers lay out a meticulous storyboard.

We knew that Benny would find redemption at the end, but how the talent show unfolds changed significantly over multiple versions. Many scenes leading to our climax grew organically from the mind of whomever was writing or editing that day. These flights of improvisation often survived final edits.

We allow each other complete latitude to steer a scene in an unexpected direction or jettison a subplot that isn’t keeping the pages turning.

For example, we never imagined that Benny’s great-great-grandfather Moshe, a klezmer fiddler who lived in Russia in the 1800s, would take on such an integral, and fantastical, role in the story. His tales, each one paralleling events in Benny’s life, are now some of our favorite parts of the novel.

Q: What do you think the novel says about the importance of musical traditions, and klezmer music in particular?

A: Benny finds incredible satisfaction in playing klezmer, not just because the music allows him to express the joys and sorrows of his life, but because it connects him to a musical tradition dating back through generations of family members.

In synagogue, he hears the ancient melodies and fiddles along in his mind. It makes him feel, as he writes in an essay about Moshe, “part of something special . . . part of something beautiful.”

While Benny, already an object of ridicule for reasons explained in the novel, is steeped in these musical traditions, he is reluctant to reveal his love of klezmer to his classmates.

In writing the book, we suspected many readers would feel the same passion about traditions that play a major part in their own lives. How Benny finds the strength to display his talents and shine a spotlight on the traditions that are so important to him lies at the heart of the novel.

We feel the message is universal: Discover what you love and embrace it, regardless of how others may feel. Will a boy who secretly takes Irish step dancing classes find inspiration from Benny’s story? Will a girl who eschews modern music for Ukrainian folk songs find the courage to share her gifts? We certainly hope so.

A: We enjoy writing for preschoolers as much as we do for tweens. Of all the reviews we receive, nothing can beat the voice of a 5-year-old begging to have a story read again, or an 11-year-old writing, “I was sad when the book was over.” That’s when we look at each other and say, “Ah, yes, that’s why we started writing in the first place!”

Certainly, creating a 50,000-word novel is a much more daunting mountain to climb, but the challenges of making all 300 words of a picture book sing in perfect harmony can be no less demanding.

A: We are putting the finishing touches on a middle-grade novel about a boy with “nomophobia,” fear of being without one’s mobile phone. There’s Morse code messages in it, a three-armed runaway squirrel, and a disastrous science fair. We believe it has the same humorous and touching elements that can be found in Benny’s story.

We’ll also be busy promoting The $150,000 Rugelach, a middle-grade novel coming out this fall from Yellow Jacket.

A: We’d like to thank the teams at PJ Our Way and Green Bean Books for believing in Benny’s story and helping to put it into the hands of young readers everywhere. It was an exceptional experience working with so many talented people.