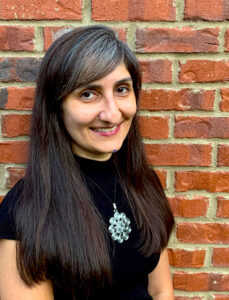 Anjali Enjeti is the author of the new novel The Parted Earth and the new essay collection Southbound. She lives outside of Atlanta.

Q: What inspired you to write The Parted Earth, which focuses on the impact of the Partition of India in 1947, and how did you create your characters Shan and Deepa?

A: The Parted Earth was inspired by my longing for my Indian grandmother. She passed away when I was about 33. I hadn’t seen her in years, and I had always promised her that I’d bring my children to India so that she could meet them. I couldn’t fulfill this promise.

Five years later, when we went to India for my cousin’s wedding, my first time in the country in 19 years, I was suddenly awash in renewed grief. Being back in her country for the first time since her death made me feel her death all over again.

It was on this trip that I got the idea for the novel, a story that centered around a granddaughter and a grandmother who are separated from one another.

A: Long before I became a writer, shortly after graduating from college, I began reading every book I could find about Partition. I was very interested in this history. I knew a little about Partition before, but learned nothing about it in school. I wanted to delve deeper.

One of the most surprising things about Partition is that there was virtually no massive, widescale effort to collect the stories of survivors until about 60 years later. 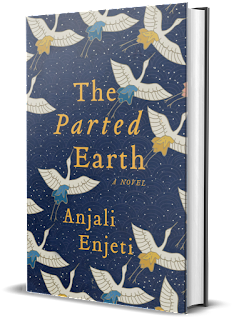 One to 2 million people died, and 15 million people migrated. It’s the largest human migration in world history. So many stories were likely lost in the decades that there was no formal documentation of them.

Q: The writer Vanessa Hua says of the novel, "Epic in scope, intimate in the telling, Anjali Enjeti’s The Parted Earth is a devastating portrayal of Partition and the trauma it wreaked in the generations that followed." What do you think of that assessment?

A: I became a fan of Vanessa Hua and her work as a journalist many years ago, and absolutely loved her short story collection, Deceit and Other Possibilities, and her novel, River of Stars. So reading this endorsement meant the world to me!

She’s also such a role model because I’m also a journalist. It helps to see other writers out there balancing both the nonfiction and fiction realm at the same time.

Q: In addition, you have an essay collection out this spring, Southbound. In an article in the Atlanta Journal-Constitution, Suzanne Van Atten writes that you changed the focus of the book in the aftermath of the 2016 presidential election. Can you say more about that?

A: In my previous iteration of Southbound, 50 percent of the essays had been previously published, and many of them focused on my own racialized trauma.

But I eventually realized that the book would resonate more if I took a look at how I had been complicit in the same kind of white supremacy that had harmed me. 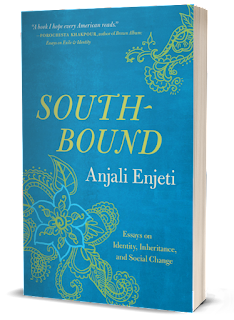 Understanding complicity is crucial not only to our personal growth, but social justice work. And it’s also empowering. Because we can’t necessarily change other people, but once we understand our own missteps and flaws, we absolutely can change and improve ourselves.

A: I’m currently rewriting my first novel. It’s set primarily in North Georgia, one of my favorite parts of the country. It’s where I escape to find peace and quiet.

A: Thank you so much for having me!