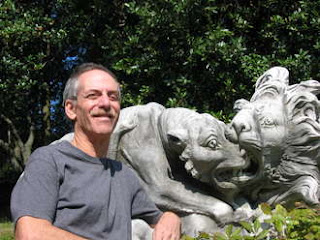 Joseph Mazur is the author of the new book Fluke: The Math & Myth of Coincidence. His other books include Enlightening Symbols and What's Luck Got to Do with It? He is an emeritus professor of mathematics at Marlboro College, and he lives in Marlboro, Vermont.

Q: In Fluke, you describe coincidences, flukes, and serendipity. How do they overlap, and what are their differences?

A: A coincidence requires a surprise as well as a non-apparent cause. It could be the basis of an interesting story, the bearer of good or bad luck, or simply a benign collision of two events that have no qualitative effect on fortune.

A fluke is a rare event whose cause might be apparent, but whose rareness suggests a surprise.

The real problem with coincidences is in its definition. Coincidences are events that happen without apparent cause. But we have to ask: Apparent to whom?

It does not mean there is no cause. There is always a cause that could easily be hidden from understanding, waiting to be discovered. The moment we learn the cause of a coincidental phenomenon, its status diminishes to a simple fluke. It means that coincidences are relative to the people affected by them.

Serendipity is always a good event that might be less of a surprise than a coincidence. 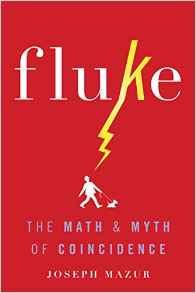 Q: How would you define a "meaningful coincidence," and what are some particularly striking examples of this phenomenon?

A: Meaning is one of those tricky words used freely without much thought about what it, itself, means. The dictionary definition tells us: meaning is the thing one intends to convey by an act or especially by language.

Ordinarily it is an element of language that — through context and actions — sculpts the definitions of the words we use. Often it is the target study of semiotic linguistic theory, communication theory, and other philosophical theories.

I take your question to be more than just a matter of words or sentences in a language that force us to think of their implications.

The meaning of X — whatever else meaning might be — must excite an emotional experience to the person who is experiencing X. It might even sync with memories triggered by imperceptible associations that can go far back in our long-forgotten past.

On the night of October 19, 2006, my wife’s ninety-year-old mother died. A week before, after my mother-in-law announced that she was ready to join her deceased husband, my wife said, “Send me a sign.” The next day, after a heavy rain, the most sharply defined, brilliant, double rainbow appeared, and moments later the two rainbows gradually joined together as one. Was it a coincidence? It could not have happened without the particular timing of my wife’s looking out the window to notice the event. Rainbows don’t last long, and their periods of sharpness are very limited. Was its cause apparent? Well, yes. Scientifically, rainbows are caused by sunlight diffracting through tiny spheres of raindrops in the atmosphere; however, the scientific explanation is not the cause of its timing and being noticed. It may very well have been the promised sign. But what caused the concurrence of timing and being noticed? Whatever it was is not apparent, at least in the sense of how we defined nonapparent in the Introduction. It is a case of evident meaning without an apparent cause. It surely touched us, even tingled our spine. For a few moments, that rainbow and its archetypal connection gave meaning to the entire concurrence. 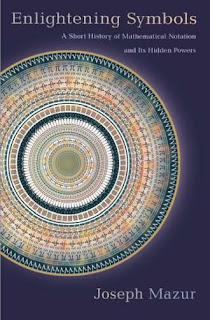 Q: You write, "People love coincidence stories, and think they are very rare." What intrigues people about coincidences, and are they as rare as people think?

People like to hear about archeological discoveries in remote parts of the world because we subliminally yearn for an understanding of our past and of who we are, but also because those discoveries are rare. In the ‘70s and ‘80s we were intrigued with NASA satellite launches. They were rare then.

We take coincidence stories as surprising events, marvel at their rarities, and ignore any sensible explanations, even though many of the finest can be explained as mathematically predictable.

We pay attention to apparent rarity, but the deeper reason for our interest in coincidences is that they transmit a strong sense of inclusive human connectivity, encourage evidence of existential significance, and validate our longing for individuality.

In reality, coincidences happen far more often than we think. Fluke shows us that they are all around us. We become aware of them only when we unavoidably collide with them in the routines of our lives. However, their frequency increases when we pay attention.  It’s all about paying attention.

A: Research for my books involve imbedding myself in the surrounding subjects for several months or possibly a year before I begin to write. I think of myself as a journalist with a troop of experts whom I can consult.

Most of my research entails interviews with helpful advisors and with reading articles and books that cover aspects of history, psychology, and literature. It’s straightforward to someone who has written extensively on connections between mathematics and its peripheral fields. 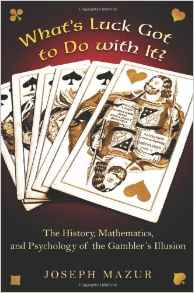 Q: What are you working on now?
A: I usually don’t like to say what I’m working on too far in advance of my work. That’s because my work does not always satisfy the great expectations of my followers and friends, a published paper or book.

Understanding that, I can tell you that at the moment I am exploring the question of luck, what it is, how people think of it, and how it relates to the likelihood of a person’s good or bad fortune. The topic is an outgrowth of two of my books, What’s Luck Got to Do with It? (2010), and my present book, Fluke.

Another exploratory project is on the history and mental powers of simple geometry, on how we came to the simple concepts of a dimensionless points and breadth-less lines, and on how far we have come from such simple yet powerfully creative concepts.

Q: Anything else we should know?
A: One thing I learned over the many years of learning, doing and teaching mathematics is that the frontiers cannot be seriously understood without passing through an understanding of the basics.

I’ve seen too many students bury themselves so deeply in quagmires of advanced jargons that a sound understanding never ripens. I’ve seen students drawn to the language of generalizations in mathematics, learning the language with no ability to apply it to anything specific. Their achievements level off to cocktails of fancy words that amount to generalized jabberwocky.

My books follow the philosophy of understanding the basics on the way to learning something deep. If I promise that a book is for the general audience, I mean that my writing will guide the general reader through all the layers of profundity that the book offers.
And so, my writing style is suited to exposing complex subjects in a friendly way. A reviewer once put it this way: “Maybe the greatest compliment I can pay Mazur is that he doesn’t come across like a professor in his writing–he’s more like a very interesting guy sitting next to you on a plane ride out to Las Vegas, who’s got several hours worth of anecdotes and an occasional mathematical proof to back them up.”

I always try to bring readers to places they have never been and to tell them things they have not known, and to keep readers reading with the feeling of being alive in a human experience.

I do that with anecdotal entrances and anecdotal relief, which are there to hook, amuse and then to give clues to what the book is about or where it is going. When possible, I try to bring in something that the reader can identify with, an historical character, a place, an object, or a brief amusement.