Emma Shevah is the author of the children's books Dream On, Amber and Dara Palmer's Major Drama, both for middle-grade readers. She lives in London.

Q: How did you come up with your character Amber, and why did you decide to make her an artist?

A: I wanted to write about a mixed race character who, when her father left, didn’t just lose a parent but the connection to that whole cultural side of her. I wanted her to be a little angry and sad but also show how loving and sensitive she was, despite everything.

As for the artist part, I grew up in a family of artists and I was the only one of my cousins to go to university to do an academic subject and not an art degree.

My step-grandmother, Nancy, is 97 and she has always painted but started her Masters in Fine Art when she was 79 and finished it when she was 82. Our houses are full of her paintings. Most of my aunts, uncles and cousins are painters, graphic designers, sculptors – they’re an arty lot.

I wanted Amber to have something that was important to her, something she was talented at doing but didn’t feel confident about, and I love the idea of being able to draw the world better than it is.

Art and humanities subjects are under serious threat in education and that’s such a tragedy. What kind of world would it be without art, literature, music and drama? I guess I chose art for Amber as it reflects her soul and her creative outlet, and to me, nurturing those things is vitally important. 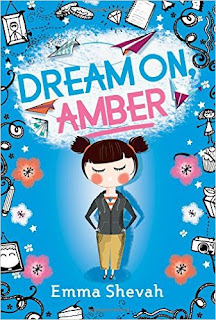 Q: You write on your website that originally the book featured a boy named Shilo as the main character. Why did you ultimately decide on a female protagonist?

A: I initially wrote my protagonist as a boy because I wanted the story to be for both girls and boys and not one or the other: the themes are universal and fatherlessness affects both genders, so I didn’t want to limit it to one. I also like the idea of a warm, sensitive and loving big brother.

But my publishers suggested making it a female protagonist and at first, I wasn’t sure about it at all. Rachel, my editor wasn’t sure either, so I rewrote a chapter or two with Shilo as a girl and I actually liked her.

I think we need more feisty girl characters high-kicking their way through life’s challenges. Amber has to find her inner warrior and overcome all kinds of fears and doubts as well as real bullies.

I think there are plenty of books about boys going out and battling and overcoming all kinds of foes and problems but girls need that too. So I’m glad I did it.

Q: You also have another book coming out later this year in the U.S. (it's already out in the U.K.), Dara Palmer's Major Drama. What can you tell us about that book? 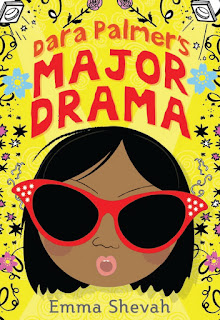 A: Dara is a total drama queen. She desperately wants to get the lead role in her school play, which is Maria in The Sound of Music, and when she doesn’t get it, she thinks it’s because her face is wrong for the thing she dreams of doing: she was adopted from an orphanage in Cambodia as a baby.

But the real reason she doesn’t get it is because she doesn’t have the first clue about acting and thinks it’s all to do with pulling faces.

Dara looks nothing like her family, and doesn’t get on at all with her younger sister, Georgia, who was adopted from Russia. Dara wonders how she’ll ever become famous and win an Oscar when there are no parts for people who look like her, and if she wants to get a lead role in any play ever, then she’s going to have to do something about it.

But when her friend Vanna, who was adopted from the same orphanage, decides to go back to Cambodia to see it for herself, Dara has to choose between following her dream and finding out about her past and where she came from.

I love Dara because she’s spontaneous, spirited and full of fun, plus she’s determined to make her dreams come true, despite there being obstacles in her path, which is admirable.

There are lots. One of my favorite contemporary authors is David Mitchell, who’s just phenomenal, as are Cormac McCarthy and Donna Tartt.

But I’ve also been hugely inspired by Joseph Conrad, Dickens, Cervantes, Virginia Woolf, Jane Austen, Shakespeare - of course - John Fowles, and children’s authors, such as Dr Seuss, Roald Dahl, Raymond Briggs, Phillip Pullman, Jandy Nelson and Goscinny and Uderzo, the authors of the Asterix books, which I loved as a child.

And I love Bill Bryson: he cracks me up and it takes a superior degree of wit to crack me up.

A: I have a few things cooking at the moment. A split narrative set by the sea about animals and a boy and a girl who meet because of their love for them; the story of a very urban girl who discovers she has skill that’s not at all in line with her character – there are other ideas stewing too.

A: There’s an exciting development in the pipeline but it’s a secret at the moment. I’ll post further updates on my website when it’s official.

Other things you should know about are as follows: some jellyfish are bioluminescent and glow in the dark; cats feel sad when they can’t have kittens and singing to them undeniably helps; and when the sky is pale, it’s because it has low self-esteem and it needs a round of applause to turn it a little bluer. (No, I have not lost my mind: these all feature the book I’m currently writing).

That’s all for now. Thanks for having me!