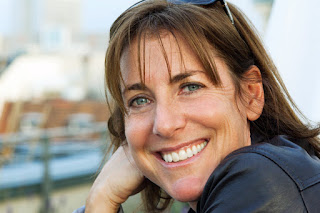 Catherine Karnow is the author of the new book Vietnam 25 Years: Documenting a Changing Country. A photographer, her work has appeared in a variety of publications, including National Geographic Traveler and Smithsonian. Born in Hong Kong, she is based in San Francisco.

Q: How would you describe your relationship with Vietnam? 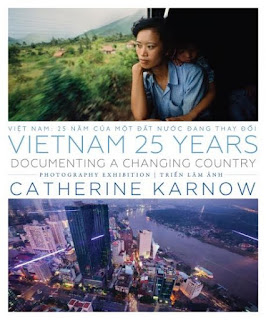 A: Vietnam has been in my life as long as I can remember. Growing up in Hong Kong, with a reporter father (Stanley Karnow, Vietnam: A History) who covered the Vietnam War, it was a subject very close to me. As a child I thought it was just a war, and didn’t even realize that it was a country until I was a bit older.

As a professional photographer, I first went in July of 1990 and fell immediately in love. Sometimes I wonder, is Vietnam my spiritual home? I have such a strong sense of belonging there. 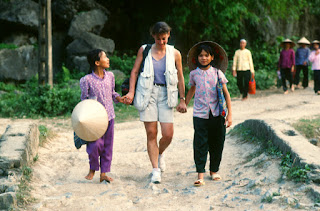 Let me elaborate. I was born and grew up in Hong Kong. Leaving at the age of 10 was wrenchingly difficult for me. I was being pulled away from my home, a that place I loved, a place that felt just right. Leaving defined the rest of my life in every way.

After we left, I yearned for Hong Kong. Though I returned back on many occasions, I never found what was missing. My sense of loss was one-sided. Around me, Hong Kong didn’t care, life went on, I felt alone. It was no longer the place I had belonged.

Somehow, Vietnam nurtured me, and I found there what was missing in Hong Kong. It is complicated to define how or why. Perhaps it is the Vietnamese people. 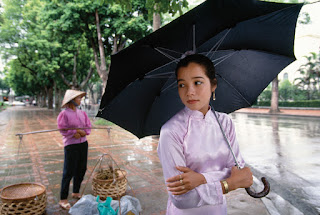 The people embrace me the way they embrace foreigners in general. They are a very nostalgic people; they find beauty in sorrow. They pause to reflect; they stop to listen. They are comfortable with emotion.

There is something else about Vietnam, which is a sentiment shared by many people, especially foreigners who live or work there. Vietnam nourishes you. It can bring out your best self. 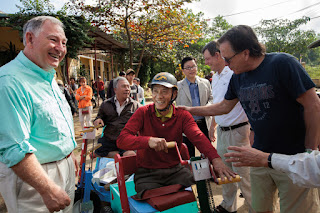 Vietnam gets under your skin. For example a close friend of mine went to Vietnam when she lost her husband suddenly. She found in Vietnam a people who had lost their country many times at war, yet remained cheerful and forward-looking. She thought, "If the Vietnamese can bear such terrible burdens and stay positive, then I can too."

For me, being in Vietnam is the best kind of therapy. If I’m feeling rudderless, that goes away when I land in Vietnam. There are always projects to get involved in, fascinating issues to discuss, a spirit of change and progress.

Because I’ve been going there so long, I notice all the changes, even something tiny: there’s a convenience store next to the hotel! Or an air-conditioned supermarket with shopping carts! 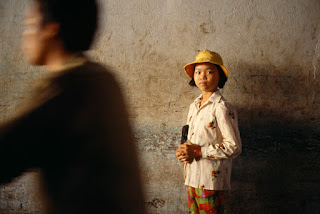 Q: You mentioned changes in Vietnam. What are some of the biggest changes you’ve seen over the 25 years you’ve been going back and forth?

A: Pico Iyer said of Vietnam in the early '90s: “Vietnam, at present, is a pretty girl with her face pressed up against the window of the dance hall, waiting to be invited in..." 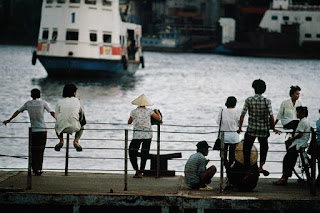 That’s how it was in the beginning of my time there. There was a sense of hopefulness and eagerness. From 1990 to 2015, the door opened little by little, and now it’s wide open. The bright, almost harsh, light is flooding the place. Vietnam is wide open to the world.

On the surface, a lot of the texture of intrigue and darkness is gone. Visually many old structures have been torn down, and the street life is diminishing. To some extent, when you’re in Saigon, you feel as if it could be any major city in Asia. 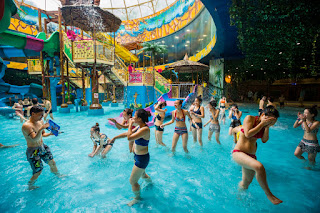 Along with those changes, one of the biggest is in the urban youth. To some degree, the urban youth of Vietnam resemble youth anywhere, with their knowledge of pop culture, music, movies, apps, technology, software, Facebook—they’re just as current as any young person in our global world. 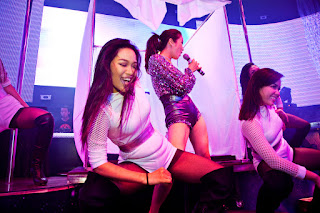 It’s completely different from the older generation, because they have only known war. 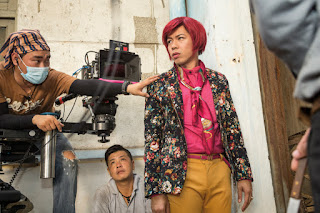 Another major change is the influx of the Viet Kieu, or Overseas Vietnamese. Perhaps this is one upside of the war. If there hadn’t been the exodus of all those people, you would not now have the return. And they are returning in droves, bringing with them a whole new Vietnam: in fashion, technology, business, hospitality and a new way of thinking. 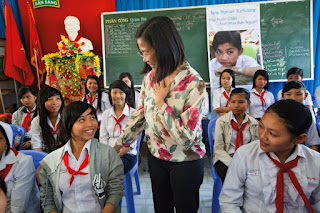 For example, Vietnam has always been a Confucian country. Now the new youth are learning, and are being encouraged by Viet Kieu bosses, to think outside the box and to challenge authority. Because of these factors, the youth of Vietnam are changing the face of Vietnam. 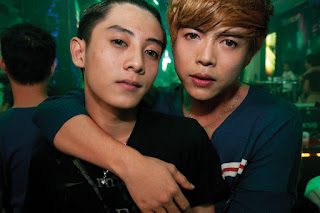 Finally, there are big changes with LBGT rights. Previously, the Vietnamese government looked the other way, but now gay marriage is even on the horizon. The new gay U.S. ambassador, Ted Osius, is married with children and does quite a bit to encourage gay rights, and marriage equality.

Q: In the book, you include photographs dealing with the effects of Agent Orange. How did you get involved with this issue?

A: When I first went in 1990, I covered the legacy of the U.S. war: Amerasians and Agent Orange.

Most people do not realize that there are millions of people in Vietnam affected by diseases associated with Agent Orange, that toxic herbicide the U.S. military sprayed over parts of Vietnam during the war. Now we know that these diseases are passed down genetically.

Back to 1990. In the Tu Du maternity hospital in Saigon, there was a Dr. Nguyen Thi Phuong Tan. She was an obstetrician, and one of the first to notice that many of the babies she was delivering were deformed, and that women were carrying horribly malformed fetuses, which would not make it to birth.

I photographed Dr. Phuong with a pair of Siamese twins she had just delivered.  In the back room of the hospital were dozens of jars of deformed fetuses. When I was first shown to this room, I was so shocked, I could not shoot. Although I had a tight schedule, I had to postpone this shoot for a couple weeks. It was the most ghastly thing I had even seen. Agent Orange fetuses.

Instead that day, I spent time with a pair of twins – Viet and Duc Nguyen - who had just been separated in a historic operation funded by the Japanese.

While Duc was a sort of a prodigy, able to play on his little piano any tune he had just heard, Viet lay like a vegetable, unable to comprehend anything. I will add that Duc went on to marry and have twins of his own, while Viet died some years later. 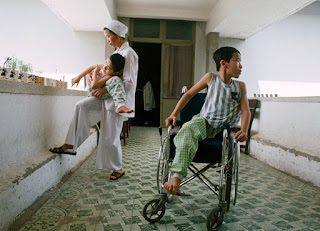 It was my first exposure to Agent Orange. It was very powerful. I meant to return to Vietnam and seriously photograph that subject.

In 2010 that I was asked by Charles Bailey of the Ford Foundation to be one of a dozen journalists to shoot a project of our choice on Agent Orange.

I decided to team up with National Geographic photographer and filmmaker Ed Kashi and to shoot a multi-media piece in Danang, a “hot spot” for Agent Orange. He shot video and I did the stills. I did the groundwork to find the families. We focused on two families, one that was well served with a lot of support and one that received little support, to show how support can make a difference. A very simple message. 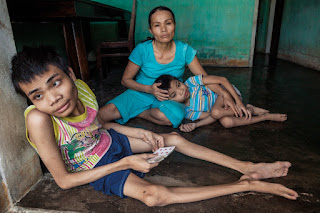 We spent about 10 days covering the two families in Danang. My still photographs would go on to win awards; they were shown everywhere and made a huge difference.

A U.S. senator actually visited one of the families. It was the first time someone so prominent in the U.S. government would openly acknowledge the humanitarian issue. These Agent Orange families need help. In all fairness, the U.S. has embarked on a couple environmental projects to clean up these “hot spots,” but I think they are ignoring more important problems.

Recently, I raised $27,000 on a crowd-funding site, to do a small multimedia project to raise awareness, to then do a larger project with bigger funding. I will be shooting this in 2016. I will again concentrate on the families.

Q: I know a lot of people will want to find out more about how your family connections to Vietnam have affected your relationship with the country.

A: I think it’s contributed to my sense of belonging. It’s curious and unusual to go to a foreign country where everybody knows, and admires, your father. 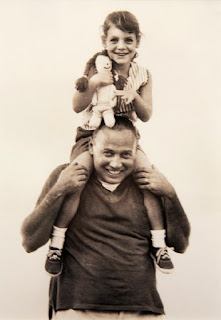 Most people don’t know this, but my mother lived in Saigon in the 1950s. It’s pure coincidence. But the Vietnamese will say that nothing is a coincidence.

It’s all wrapped up with—I can’t call it my spiritual home, but something more mysterious is at work with my belonging, my presence, my relationship with Vietnam.

A:  I had been giving my very successful Umbria Workshop (catherinekarnowphotoworkshop.com) for four years when I decided to design a Vietnam Photo Workshop, which launched last October. It took 25 years of experience in that country, three years of thinking about it, a year of intense planning, and a fantastic team to help me put it together.

I was ready for things to go wrong, from the weather to people backing out of appointments to things being shut when we turned up.

And yet it went better than I could have imagined. Again, it was almost bizarre - as if, again, I am blessed by a larger presence in Vietnam. 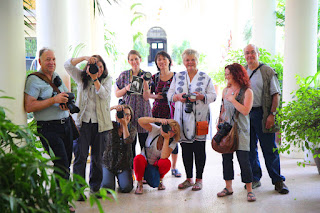 There are many photo workshops, tours and trips given to Vietnam, but nothing even comes close to mine. I offer great photo experiences and visits with fascinating people who can tell us their stories and educate us on history, economy, photography and art, and culture.

Our experiences include a possible dinner at the ambassador’s residence; offering respects at General Giap’s home, a tour of his offices, and tea with his family; shooting a fashion show with deaf models; dinner in my gallerist’s art-filled house; an exclusive visit at a non-touristy pagoda and a private audience with the head monk; a life-changing afternoon with Agent Orange families, amongst many more. 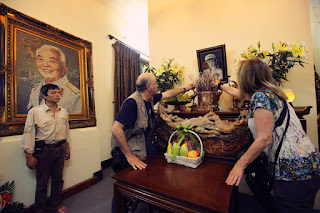 Plus we have class time and photo critiques both one on one and as a group. This workshop is totally unique.

In Vietnam, something deeper is happening. It’s an enigma that keeps me coming back. I have an endless number of ideas and projects and so much more to explore.


I self-published this book as a catalog to accompany my grand exhibition in Hanoi in April of this year, at the Art Vietnam Gallery. The show was a celebration of the 40th anniversary of the end of the Vietnam-U.S. War. The catalog quickly became a 235-page book filled with not only photographs but beautifully written introductions by the writer Andrew Lam, and my gallerist, Suzanne Lecht, and many anecdotes and remarkable stories of my years in Vietnam. 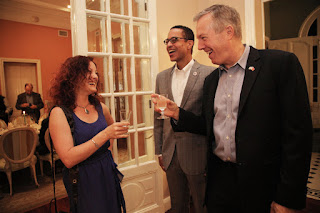