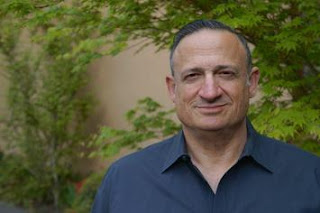 Robert Hill is the author of the new novel The Remnants. He also has written the novel When All Is Said and Done. He has worked in various fields of writing, including advertising and educational software. Originally from New England, he is based in the Portland, Oregon area.

A: I used to own a house that had about an acre of sloping land, and when I bought it, nearly half that acre was entombed in blackberries. The day I closed and got the keys, I went down to the entombed half and started to bushwhack through it just to see what was there.

To my surprise, there was a small shed that had not been used in ages, and just beyond it, a very long neglected grove of apple trees. The trees were too old and overgrown to do anything with them beyond letting them be; they grew deformed apples that a family of deer used to nose into piles and dine on. There was a story to them for sure, though I did not know what it was.

Jump ahead a few years, to when I had finished my first novel (which had nothing to do with apple trees) and when I thought for sure that I’d never write another word because nothing was coming to my mind, when one afternoon standing on my deck looking down the slope to the apple trees I heard an elderly woman’s voice say as clear to me as any voice has ever spoken, “Don’t be afraid to buy the big bunny!”

In that moment and in that voice (which I concluded was definitely addled by age), lay the seed of The Remnants. That old woman became the character True Bliss, those arthritic apple trees the remnants of her world, and that world the dying town of New Eden, suspended in a kind of eternal twilight.

The town’s name came about one day at the end of sentence I was laboring over – it just jumped out at me like a deer jumping in front of my car. Out of nowhere, but so right, so right. 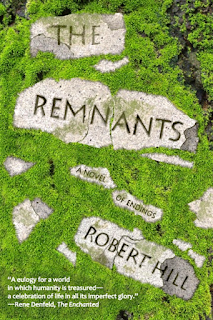 Q: The characters all have fascinating names—how did you decide on their names, and also on the book’s title?

A: After the character True Bliss came to mind and stuck in my head for reasons I’ll never truly know, I saw that her town was peopled by similarly odd or remarkable names.

So I went into my own history for names that stand out to me: names of towns (my cousins lived in Swampscott, Massachusetts, thus Frainey Swampscott); names of schools (I attended Horace C. Hurlbutt Elementary School, thus the character Elementary Hurlbutt); orchards near where I grew up had the name Aspetuck, so that became one family’s name, and for the brother and sister of that family who were a celebration to their parents, the names Carnival and Jubilee seemed appropriate; while another character’s name came to me in a dream (I won’t say which).

I wanted names to reflect an isolated town where fashionable names of the day elsewhere would not necessarily be observed – no Marys, no Marthas, no Johns, no Thomases. One name in particular, which I created as a pun, and spelled different, is a 20th century word which connotes pure evil, but to the people of New Eden, it’s just another name.

Because all of the characters are the last of their families, and the last of the town, the title, The Remnants, resonated almost from the very beginning.

Q: The book jumps from one character to another. Did you plan the entire book out before you started writing, or did you make many changes as you went along?

I planned nothing, other than hoping it would be something worth working on, and at times I questioned whether or not it was, because it was soooo different from what other folks in my writing group were working on!

I believe that all stories and all lives overlap. As soon as I started exploring the character True Bliss, I found myself diving into back story, and back story started to give me other characters and town lore, and it was town lore more than anything that led me to bleed story from one character to another, where one person’s experience with one aspect of the story could be and mean something completely different to another’s, and one person’s story could begin with them, but lead you to another person entirely, and a different piece of that story. 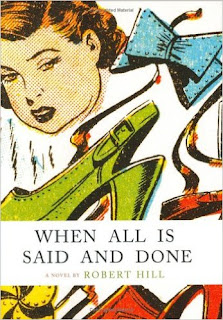 A: Tom Spanbauer more than anyone, for numerous reasons, not the least of which is that he took me seriously as a writer, respected what I could do, encouraged me to make it all that it could be, and then championed my work. And then there’s his heart, and the way it is married to his talent – both of which are huge and full of bruised poetry.

Other writers I revere and whose work may influence me directly or indirectly, in no particular order, for what they write about and how, are: John Cheever, Nelson Algren, Willa Cather, James Salter.

A: Right now I’m working on a messy bit of business about a middle-aged man coming to terms with the absences in his life, and how those absences, or missing pieces, define him and have made him who he is.  That’s about all I can say of it at this point. The working title is An Unfinished Man.

A: I feel very, very lucky to have two novels published. It’s such a difficult thing just to write a manuscript, but then to have to go through what one goes through to have an agent see it, to have a publisher see it, to have the miracle of miracles happen where an editor say yes, I get this, I get you, can be such a long, disheartening experience as to make any writer lose hope of their words growing a binding that will one day line up and face out on a bookshelf full of others.

I know some really talented writers with magnificent manuscripts who can’t even get an agent to read their stuff. There doesn’t seem to be any rhyme or reason to why my works got through and theirs haven’t. That’s why I believe it’s been a matter of luck for me.

All I can say to any fellow writers is: write for yourself. You and the keyboard and the blank screen filling with what’s inside of you and the hours alone exploring and shaping and crafting have to be satisfaction enough. Write for no other reason than because you love to write. It’s all a crapshoot. You’re a writer even if you’re not published. Be proud of that.