Jakob Melander is the author of the crime novel series featuring Detective Lars Winkler, which includes The House That Jack Built and The Scream of the Butterfly. He is also a musician, and he lives in Copenhagen, Denmark.

Q: How did you come up with your main character, Lars Winkler?

A: Well, I knew I had to give something of myself, when I set out to create the main character of The House that Jack Built. So there’s a lot of me in him.

But obviously I’ve turned the different characteristics that we share up or down, in order to make him his own man. And then I added a few traits that are not me at all.

For example, I made him a smoker. I don’t smoke, and I thought I could use that to hide myself. If someone were to ask me, this or that trait in Lars, surely, that must be you. I then imagined I could say: “Well, actually, it’s like Lars smoking: I don’t smoke, and this (that you’re pointing at) isn’t me either!”

As it turned out, this made it possible for me to be even more frank and come closer to my true self. And, well, no one really asked me these questions, when the book came out. Still haven’t:)

Then, The House that Jack Built is a story about being a father, or rather, how to become a good father. And this, as should befit the plot in all good crime fiction, should be reflected in my main character. So it was a given that he had to be a father.

And since the back story from World War II was about a father having trouble to come to terms with his daughter’s growing up and becoming a woman, becoming a sexual being, I knew that Lars’ daughter would have to be a teenager too, and have to have a boyfriend of sorts. So there were all these things that came naturally, you could say. That the story demanded. 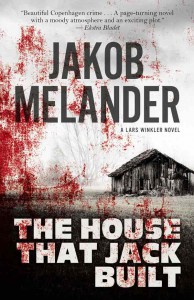 Also, his background in the punk scene of Copenhagen in the early 1980s reflects my own. This, I think, makes totals sense in regard to his character. The autonomy and individuality and his having trouble with authoritiies. Also this made it easier for me to get inside him, to write him. I’m sure you’re familiar with the saying: “Write what you know!” Well, I did!

Then there is his name. It had to be typical Scandinavian, but as his father is an American, it would have to work in English too. And I knew I would have to write it a lot, so I wanted it to be short:)

And I think Lars fits the bill on all three points. His last name “Winkler” means something like “Angle.” So I thought that made sense with his troubled character and general social problems.

Q: Did you know before you started the first book that you’d be writing a series about him?

A: No, I only started out to write this one book. But as work with the novel progressed and his character developed, more stories popped out of me.

Q: Do you plot out the entire book before starting it, or do you make many changes as you go along?

A: I do plot out the arc of the story and the main idea for each chapter (what will my main character find or learn, who will they meet and where). I use a lot of post-its on the wall of my study – one for each chapter – moving the around as I plot the story.

Then, when I feel the first tinges of fear that I will forget it all and I just feel I have to start writing, THEN I’ll begin writing out the first draft. I’ll do many changes as I go along, as I realize that what I had envisioned originally doesn’t work out. 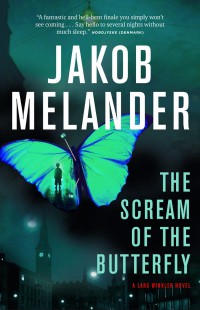 Then, when the first draft is done, I work through each of them, almost like a sculptor chipping away at his block of marble until he (or she) has found the perfect form and shape. And then I read it all aloud to myself from start to finish, changing as my gut tells me to as I go along. Which brings me to your next question:

Q:  You’re also a musician, and you write on your website that “music has a place in my novels, too.” How do music and writing coexist for you?

A: Well, first and foremost in language. Language is music, too. I often find myself changing the phrasing of a sentence purely on sound – darker vowels in the front, lighter later on, for example, or vice versa – or I want the sentence to have a minor or major sound or feel. And rhythm and timbre too, of course.

Then, in English, all of my novels have a song title (or a line from a song) as a title. And I use music to enhance emotions, mood and so forth. In The House that Jack Built the plot even pivots around a song by The Rolling Stones.

A: Right now my fourth novel, With a Little Help from My Friends (there you go: a song again!) has just been released in my native Denmark, so I’m doing a lot of promotion for that at the moment.

But I’m also working on a novel inspired by the biblical story of Cain and Abel, set partly in modern-day Copenhagen and partly in Athens, Greece, in 1973 during the military junta. I’m working with my editor on the first draft right now. Should be finished before summer.

This novel is not part of the Lars Winkler series, it has a different protagonist, and will be out in Denmark in early October this year under the name Elektra.

And then, around June or July, I’ll start working on Lars Winkler volume 5 for real. Ideas are already spiraling around in my head.

A: Well, basically, I think your questions really came all around – maybe I could tell a bit about the capital of Denmark, Copenhagen. That has a big place in the novels too. Almost like a sort of second main character.

But it’s in a slightly odd way. I was born and raised in Copenhagen, in the same district where I live now. So for me, the real, existing Copenhagen mingles with the Copenhagen of my childhood, of a remembered Copenhagen, that only lives in my mind and now in my books, too.

So this city is a blend of reality and fiction. And I think writing crime let’s me do just that – write about the city of my memory or dreams in a way rather than the true, existing Copenhagen. I can enhance certain parts, and suppress others that might not fit the story so well…