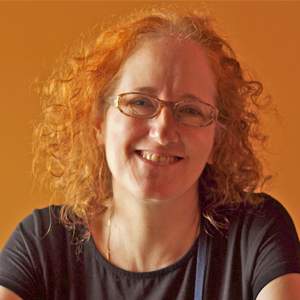 Rachel Cantor is the author of the new novel Good on Paper. She also has written the novel A Highly Unlikely Scenario, and her work has appeared in a variety of publications, including The Paris Review and The Kenyon Review. She lives in Brooklyn.

Q: How did you come up with the idea for Good on Paper, and why did you set it in the period leading up to Y2K?

A: I began writing Good on Paper when I was at a residency at the MacDowell Colony in New Hampshire.

I had hoped then to write the last story in a linked story collection about Shira Greene and her friends, but they gave me seven weeks, which was the longest time I’d ever had to write, and the story got larger and larger. Eventually, I realized I was writing a novel!

The characters predated the novel, then, and belonged to very particular generations—Shira had been something of a flower girl when she was young; her best friend Ahmad advised Republican presidents about the Soviet Union; the poet she translates was a World War II refugee. If Shira was to be the mother of a young child in this book, it really had to take place around the turn of the millennium. 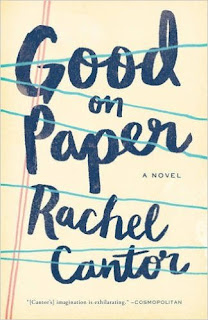 I also had a very practical concern: I didn’t want the book to be about 9/11, I didn’t want to write about 9/11 New York, so it had to take place before that. Setting it around Y2K had some comic potential, but the idea that we were facing the End of Days also resonated with certain themes in the novel.

Q: Shira is involved in translating the work of a famous writer. Why did you decide to focus on translation and writing in the novel?

A: Because my protagonist had a life before Good on Paper, it was already a given that she was a translator, and it’s not surprising that she is: she spent time in Italy as an adolescent, she studied Dante and other things Italian in grad school, and was basically a literary sort.

In thinking about the story that was to resolve all (or at least some of) the open questions in the collection, I asked myself what Shira might get up to that would challenge her to the core.

It seemed natural, given who she is (and who I am!) that this challenge would involve her work, it would involve writing, and reading. I was able to put her on a trajectory that made good use of this important fact about her.

As that short story expanded and expanded, though, becoming deeper and deeper, I began to understand just what a good idea it was to center the story on translation: Shira doesn’t really trust her own (or anyone’s) ability to transfer meaning from one language to another; she doesn’t believe meaningful connection is possible—between languages or people. 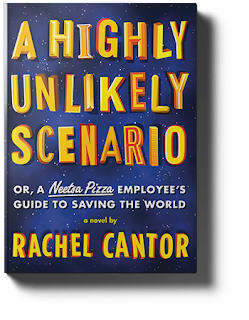 A: My editor helped me choose the book’s title. It refers in part to the difference between what we believe is or will or should be good (what’s “good on paper”) and what is actually good (what’s good in life, I guess).

This applies to everything in Shira’s life—the men she falls in love with, the jobs she takes on, even the life she lives now—none of it is what she’d planned for herself. How can she understand that disconnect?

The idea doubly resonates because Shira’s life really does revolve around paper, from the opening scene, where she escapes a temp job folding papers by hiding in a supply closet full of copy paper, to the telegram that changes everything, the translation pages she receives by fax, the stories she (and even her daughter) writes, the pages of the litmag her boyfriend edits, the books in his bookstore, and so on.

Q: Do you know how your novels will end, or do you make many changes as you go along?

A: I knew where Good on Paper had to begin and where it had end, but I didn’t know how I’d get there, and really there may have been an infinite number of paths I could have chosen to get from point A to point Z.

I don’t outline, ever, though I did have a general sense of the basic structure I would use (a hero’s journey, eccentrically understood), which helped me unfold the plot and, later, to revise what I’d written.

I couldn’t ever write knowing everything that was going to happen, or even much of it—the fun of writing, for me, is in not knowing what’s around the bend! So, really, I had to figure out almost all of the book as I went along.

This makes for a long process, as I made many mistakes and had to revise for many, many years, but a rewarding process nonetheless.

A: I’m finishing a novel-in-stories tentatively titled Half-Life of a Stolen Sister, which reimagines the lives of the Brontë siblings in a different time and place.

I’m very excited about it—it’s quite different from what I’ve done before while also being a natural extension of all my prior work! Do I jinx myself by saying I hope to finish it this year, during the bicentenary of Charlotte Brontë’s birth?

--Interview with Deborah Kalb. For a previous Q&A with Rachel Cantor, please click here.
Posted by Deborah Kalb at 9:38 AM