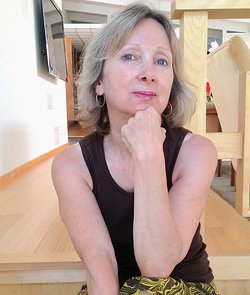 Anna Waterhouse is the co-author, with Kareem Abdul-Jabbar, of the new novel Mycroft Holmes. She is a screenwriter and script consultant, and her work includes serving as supervising producer and co-writer of the documentary On the Shoulders of Giants. She has taught screenwriting at USC and at Chapman University in Southern California.

Q: How did you and Kareem Abdul-Jabbar end up writing this book together, and what was the writing process like?

A: I'd been hired a few years earlier to fix a documentary that meant a lot to Kareem, On the Shoulders of Giants. He and I fixed the script and then oversaw the new edit. It went on to win some substantial awards.

So when his business partner and manager, Deborah Morales, realized he still had this dream of writing a mystery novel, she called me, and we began discussing the possibilities.

As for the writing process, it was unusual in that we never wrote "in the same room." But we nevertheless collaborated every step of the way.

Fundamentally, the process was this: Mycroft Holmes was and is Kareem's passion, as is all of Conan Doyle's work. So, as I said above, he brought the idea to the table to begin with. From there, we both started adding elements of story — something which became so intertwined that I can honestly say I don't remember the origin of many of the ideas.

From there, because we realized we both had busy schedules (Kareem's in particular!), we drafted a very elaborate 50-page outline, which both he and I, and then our editor at Titan, signed off on.

Because we had such a thorough map, I was then able to cobble together a rough Chapter One and pass it on to Kareem. He made notes, suggestions, changes, and shot it back to me. We went back and forth like that through every single chapter, not moving on until we were both satisfied that it was as good as we could make it.

Of course, he threw me some curves along the way: not just Trinidad (which we'll discuss below), but the Cambridge/Oxford race at the beginning, and Ascot at the end! (Ascot wasn't even part of the original 50-page outline...but it was just an idea that was too good to pass up.)

And I have to confess it would never have occurred to me to begin and end with sports! But of course we did, and everything about both races is entirely factual....except possibly the Mycroft Holmes and Douglas involvement! 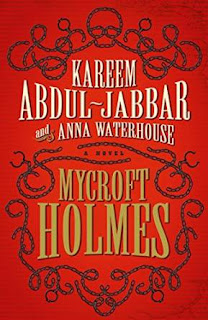 In fact, just about everyone/everything in the story has an historical base, from Mycroft's boss Cardwell to the governor of Trinidad...even the names of the rowers in the opening race are real.

Q: Can you say more about the choice of Mycroft Holmes rather than Sherlock Holmes as the main character, and why did you settle upon Mycroft as a young man?

A: Well, again, I didn't choose Mycroft — that was all Kareem. As much as he loves Sherlock the sleuth, he was even more taken with the idea of his brother, a strategist and diplomat, someone who had (or will have...if we're allowed to write some sequels!) his finger on the pulse of the British government, which at the time was the most powerful country in the world.

Mycroft has already become a bit of a Machiavelli in this book — and will have to become even more so, in order to negotiate the deep waters of political/government intrigue that he'll be facing. Kareem has a passion for all things history and a good knowledge of it, so the Victorian era is a perfect era for him: he's a kid in a candy store.

We decided on Mycroft as a young man because we didn't want to start him as the obese curmudgeon that he is in his 40s, when Conan Doyle first introduces him to the world. We'd like the chance to explain how he became that person.

As I've said several times, picture old Marlon Brando. Now picture young Marlon Brando. That's what we were going for. It's not that much of a stretch for someone to be handsome and athletic in his youth and be...less so as he ages, and I hope the purists will give us a chance to show that it is not our intent to denigrate Conan Doyle's creation, but to create a "What if...?"

Q: Much of the book is set in Trinidad. Why did you select that as the location, and how did you come up with Mycroft’s sidekick, Cyrus Douglas?

A: Trinidad is the birthplace of Kareem's ancestors. His grandmother Venus, to whom he dedicates the book, was born and raised there, and told him stories of the lougarou when he was little, to keep him from wandering around after bedtime!

We used the stories she'd tell, and combined them with the douen (a later discovery, during research) to set up the “supernatural” happenings that set the adventure into motion.

As for Cyrus Douglas, he is one of those creatures who seems to have emerged fully formed, and no one quite knows how or why. We were clear on a few things: that Mycroft would need a sidekick to help explain some plot points to the readers. And that we didn't want this person to be a journalist/essayist of the story.

But from there, who knows? I can only tell you that we consciously decided that even the word "sidekick" would not really do, that this person had to be his own man in every sense of the phrase.

And that, because Mycroft is going to tread some morally shaky territory, this friend would need to be a moral center that could lead him back to an ethical place. That probably meant he'd have to be older and wiser in years, and that he probably had to suffer a few indignities so that his ethics were forged in steel and not just lectures.

Beyond that, the two would have to have cigars and fine brandies in common — and we figured that someone like Mycroft would be fairly well color-blind, as long as this person knew all about cigars and fine brandies! The fact that Douglas's rather quiet demeanor or height (he's taller than average) reminds some people of Kareem....pure coincidence!

Q: What did you see as the right balance between the Mycroft Holmes character as written by Sir Arthur Conan Doyle, and the new aspects you brought to this character?

A: We wanted to begin this story at least 20 years earlier than the Conan Doyle stories, so that we'd have plenty of room to maneuver. There are hints of what Mycroft will become (and, given the opportunity, we fully intend to go there).

Though the reviews overall have been stellar, occasionally, we hear from readers that (Mycroft's fiancée) Georgiana is too fated for a bad end....but it was never our intent to have that be a mystery for anyone but Mycroft. The mystery at the heart of the story lies elsewhere.

The fact is, Conan Doyle portrays both brothers as having a rather complicated relationship with women (in that they have no overt romantic relationships with them at all), and we had to ask ourselves, "Well, why it that?" In the case of Mycroft, had he loved and lost? Might he do so again until he can no longer trust himself to fall in love at all?

A: We just finished HBO's documentary, Kareem: Minority of One, which came out in November and did very well in terms of views. I am teaching screenwriting at USC and doing consulting....and we'll see what transpires next!