Peter Stone is the author of the new young adult novel The Perfect Candidate, which is set in Washington, D.C. He has worked as a TV and film marketing executive for 10 years, and is based in Tokyo.

Q: How did you come up with the idea for The Perfect Candidate, and for your character Cameron?

A: I interned for Congressman Gary Condit’s Capitol Hill office the summer after I graduated from high school. Soon after, he would be embroiled in this century’s first notorious political scandal: the murder of young staffer Chandra Levy.

Levy’s death was the first plot twist of my adult life - a dead young woman from my hometown suddenly dominated the tabloids. (The police eventually cleared Condit of any criminal behavior).

I was later a research assistant and Spanish tutor for Newt Gingich (teaching Newt the difference between preterite and imperfect tenses while in the green room at Fox News is a whole other essay).

Those internships made me wonder then – and I still ponder it today - what current interns or low-level staffers are sitting on secrets and just a click or a post or a call away from changing the world?

My journal entries and memories - and these scary questions - are what led me to write The Perfect Candidate: a mystery about an ordinary teen intern Cameron Carter - whose search for the truth makes him an extraordinary kind of spy at his core. 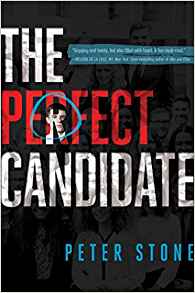 Q: How much did your own experience working in D.C. affect your writing of the novel?

A: My time in D.C. was my first thrilling, sour, indelible, heady taste of life beyond the small town I grew up in. It’s a cliché, but I couldn’t wait to get out of my hometown and live in a big city. Washington did not disappoint.

Characters in the novel are composed of various personalities and specific quotes that I remember from those internships (like one senior staffer’s condescending greeting to Cameron: “Hello, Intern.”) Even the monuments, metro stations, and cold marble hallways became characters of the story in their own right.

Beyond the internships, I also wanted to explore the time in life that immediately follows high school. The whole experience was thrilling and formative for me – and then ultimately disillusioning as the rumors about Condit flew and the media feeding frenzy began.

Once I encountered the darker side of D.C., the secret bargain of “leaving home” became clear to me: you can never go back. The adolescence I was so ready to leave behind was actually wonderful in its own way – maybe even idyllic. And suddenly gone for good.

That Cameron has already passed this point of no return helped me to increase the emotional stakes and suspense of the narrative.

A: Without giving too much away, readers of The Perfect Candidate will find some key revelations in the final pages of the book.  I always envisioned this rug-pull and how it makes the reader rethink everything that has come before.

However - along the way, I did make a number of changes – and I have my agent and the Simon & Schuster team to thank for their invaluable perspective and advice.  One area that came a long way from the first draft is the romantic throughline in the story.  Plot and dialogue came naturally to me; romance did not.

Q: What do you think the novel says about politics and those who choose to work in that field?

A: I say in the acknowledgements section that the novel may seem like a burn book for Washington, D.C. – but in reality, it’s a love letter. The Perfect Candidate reveals the corrupt roots of many tenured leaders and their associates. But it also shows the power of optimism, specifically among the youthful army of interns that flow into and out of the city.

While today’s political climate is unprecedented and polarizing, I think there is one undisputed gain: teenagers are more thoughtful than ever about government and how it impacts them. I hope they continue to volunteer for political campaigns, to march and write and speak their beliefs, and to take anxious, lonely airplane flights into the unknown of summer internships in our nation’s capitol.

Cameron Carter embodies my experiences that summer—but he is also any teenager whose trust is betrayed and then who doubles down in search of the truth and what is right. That same curiosity—that engagement—will change the lives of young people who choose to work in politics. And it may change the world.

And if, like Cameron, they happen to stumble upon and expose a breathtaking and scary political scandal while they’re at it—more power to them. (Let’s just hope they’re spared the death threats, paranoia, and desperate chases that Cameron encounters…)

A: My road to publication started at my wedding reception. One of the guests (friends of my in-laws) approached me after hearing the wedding vows I’d spoken.

Apparently impressed with my speech, she asked me if I was a writer. I joked back that I wrote emails at my job. She then urged me to write a book. I attributed her generous assessment to her probably having had a couple drinks from the bar.

When I later learned that this wedding guest was New York Times bestselling author Margaret Stohl, I listened to the advice more seriously and took a stab at what became the first chapter of The Perfect Candidate.

Writing a novel was awkward at first, like learning how to ride a bike (or maybe better put: how to fly a helicopter). All sorts of negative voices and doubts emerged in my mind. But the spark was there, and I couldn’t not chase it.

Two key takeaways: 1) The first person who needs to believe in you as a writer is yourself; and 2) Invite Margaret Stohl to your wedding.