Ann Callaghan Allen is the author of the new book The Madame's Business: The Remarkable Life and Tragic Death of Malvina Guimaraes. It focuses on the eventful life of a 19th century woman who was a successful entrepreneur. Allen taught in LeMoyne College's Department of Communication and Film Studies for many years. She lives in Syracuse, N.Y.

Q: How did you first learn about Malvina Guimaraes, and at what point did you decide to write a book about her?

A: I'd heard rumors about Malvina over the years, that she was the mistress of Isaac Singer, of Singer Sewing Machine fame, and that he in turn gifted her the South American franchise for Singer Sewing machines. She became fabulously wealthy as a result.

I thought that might make a pretty good story, but turns out, it wasn't true. What was true, her real story, was far more interesting and intriguing.

What prompted me to learn more about her was a chance conversation a little over a year ago with the Oswego County Historian. I was working with him on an event to honor one of the city's most prominent community members, Ruth Sayer, who was turning 100 years old.

She was a prime supporter of many of the city's historic and cultural organizations and in particular, of the historic Riverside Cemetery where the monument  for Malvina Guimaraes is situated.

I'd never seen the monument so that was my first stop. When I saw the monument, with Malvina's full-size bas relief portrait, I was mesmerized. Curiosity led me to read through accounts of her in historic newspapers online.

One story mentioned that the probate of her estate took 13 years and had accumulated the most paperwork for a court case to that time in New York State. She died in Oswego and so I went looking for her will or other papers about the estate in the courthouse in Oswego.

Q: How did you conduct the research for the book, and what did you learn that particularly fascinated or surprised you?

A: In a dusty closet in the Surrogate's court was a very large brown metal box. The box was filled with original documents, letters, accounts, first-person testimony, about the life and estate of Malvina Guimaraes. 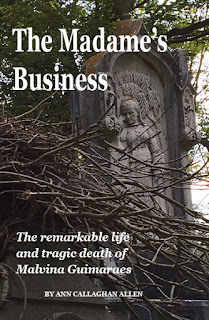 I spent weeks going in and out of the courthouse, opening that box and reading hand-written documents on crumbly parchment paper and these helped form an outline of who she was and what she did to accumulate such wealth.

Along with her first husband, Malvina was on a ship called the San Francisco that encountered one of the worst storms ever in the Atlantic. She was on her way to Brazil to open the market for Wheeler and Wilson sewing machines there.

This was one of the Atlantic Ocean's most famous shipwrecks and Malvina was part of it. It was well documented in newspapers nationwide, so that was a great find for me.

The more I read about Malvina and the circumstances of her life, the more I realized what an extraordinary woman she was for her time. She was an entrepreneur at a time when women rarely left their homes. She was adventurous.

Not only did she survive the wreck of the ship San Francisco but, undaunted by that experience, she went back to South America a year later and introduced the sewing machine to the just emerging market there.

She did this at the same time other women were working to free themselves from convention through the suffrage movement. But Malvina would not wait for politics to catch up with her ambition. She just went ahead and built herself a fortune.

Q: You write in the book's introduction, "Were Malvina Guimaraes alive today, she would likely be a part of the #MeToo movement." What resonance does her story have today, and what do you see as her legacy?

A: It was not unusual for women to be subservient to men in Malvina's day. She managed to overcome that subservience for the most part because she built a business and amassed a fortune that forced people to acknowledge and respect her.

Then she met and married Antonio Ribiero Seabra. Fatal mistake. It was a decision I still cannot understand, nor at the time could her family members and friends. Seabra knew how to wield male power. He used the law and especially the legal system in Portugal to wrest much of her fortune from her.

In New York State, Malvina was master of her fortune, thanks to the women's movement that abolished the law of coverture here in 1848. But in Lisbon, those laws did not change until the early 1970s!

A: "The Madame's Business" was not the first title. Many of the legal documents referred to Malvina's fortune as "the casal," so I started by titling it, "In the Matter of the Casal."

After talking with the historian who first sparked my interest in Malvina's story, I changed it to "The Madame's Business." He thought the word casal was not familiar and might confuse people.

Malvina was often referred to as "Madame Guimaraes." That was a title of respect, especially in Portugal where she resided part of the time with her second husband, Jose Guimaraes.

Looking back at some of the original court testimony there was a part where Seabra was quoted as saying he would be "taking care of the Madame's business." I thought, well indeed he did, didn't he?

The heart of the story was also about the fact that Madame Malvina Guimaraes really did build her very own business. The title "The Madame's Business" seemed to encompass all of that. And if people look at the title and wrongly assume she was a "madame" and it prompts them to buy the book, I guess it could be seen as a marketing strategy as well.

A: Well, I never intended to write a book. This one just happened because I am so darned curious.

And I am working still to sell the book because the proceeds from the book sales go to the restoration of her monument, the place that first prompted me to find out more about her story. It is a magnificent work of art but sadly in disrepair at present.

After we launched the book I heard from an art historian in Portugal. He saw publicity for the book online and was, at that very same time, researching Jose Guimaraes, Malvina's second husband. Behold, the power of the Internet! We have been corresponding for a few months because he would like to do something with Malvina's story in Portuguese. I think my next step should be a trip to Portugal!

A: I certainly think your readers need to know how we are associated, don't you? That is a great small world story in itself! I lived with your family when you were 8 years old and babysat for you and your sister, Judy.

I look back on that 8-year-old Deborah Kalb and never could have imagined then that our paths would cross in this way all these years since. You are doing a great service for readers, not only with this blogspot but with your own writing.

And now my 8-year-old grandson has just finished his first book report on George Washington and the Magic Hat. Now if that isn't a story to make you smile, I don't know what is!