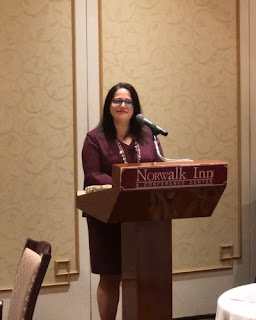 Lynn Nanos is the author of the new book Breakdown: A Clinician's Experience in a Broken System of Emergency Psychiatry. She is a psychiatric social worker in Massachusetts.

Q: In the preface to your book, you write about a tragedy that was part of the inspiration for you to write Breakdown. In what ways do you hope the book helps to change the system of emergency psychiatry in this country?

A: As an inpatient psychiatric social worker, I tried to help a patient with psychosis who refused to accept treatment because he didn't believe he was ill, called anosognosia. I had a one-way conversation with his mother and couldn't give her any information because he refused to sign a release of confidentiality.

Since she had been living with him, she reported about his deterioration over the last several months, including an uncharacteristic assault against her. Despite my passing on to the psychiatrist her report, he was discharged to her home in less than a week. Shortly thereafter, he stabbed her to death.

I wrote Breakdown to improve care for the most seriously mentally ill population, particularly those with psychosis. This group is typically considered more difficult and expensive for agencies to treat, thus the system often neglects them. Many of them are not able to independently initiate treatment or formulate treatment plans due to anosognosia.

Q: You describe the emergency psychiatry system as “broken.” How did it get this way, and what do you see looking ahead? 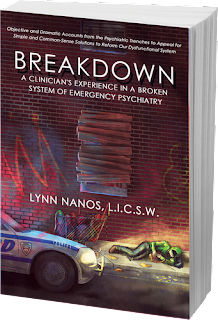 A: Beyond insufficient involuntary hold laws, the revolving door of the system - the rate of readmission to inpatient and emergency services is astronomical - is the most obvious sign of a broken system.

Before patients are admitted to inpatient units, many are repeatedly discharged to their homes or the streets from hospital emergency departments. Patients are not sufficiently stabilized when they are discharged from emergency departments and inpatient units prematurely. Consequently, they can end up homeless, jailed, harming others, or even dead.

Since the 1950s, well over three-quarters of inpatient beds got eliminated. Then in the 1970s, state laws that allow involuntary transfer of patients to hospitals due to their risk of seriously harming themselves or others became more restrictive.

In recent years, Assisted Outpatient Treatment as a remedy has become more accepted and widely used. At its best, judges order the sickest of the sick to adhere to treatment recommendations, often involving medication, or face the possibility of involuntary hospitalization.

Currently, only three states do not allow Assisted Outpatient Treatment - Massachusetts, Maryland, and Connecticut. I expect that these states will adopt this type of treatment in upcoming years.

Q: Who do you see as the readership for this book, and what do you hope they take away from it?

A: Breakdown can be validating and comforting to families of this population, who might feel isolated and frustrated with the dysfunction of the system.

My hope is that the book lands in the laps of state and federal government employed clinicians, as well as legislators, who have the power to make changes.

Q: In the book, you describe the Assisted Outpatient Treatment program. What role do you see it playing today?

A: Breakdown promotes Assisted Outpatient Treatment which is underutilized or not used at all in states that allow this. According to countless sources that I cite in the book, this form of treatment has proven effective in reducing rates of homelessness, incarceration, hospitalizations, violence, and poor self-care.

I regularly witness the consequences of Massachusetts not allowing this in my role as an emergency clinician. For instance, I've helped many untreated patients who got evicted because their paranoid delusions caused them to disrupt their neighbors or their profound disorganization rendered them unable to make rent payments.

A: I am an active member of the National Shattering Silence Coalition that advocates for the seriously mentally ill population. I’m part of their committee that advises the Interdepartmental Serious Mental Illness Coordinating Committee.

Since the beginning of 2017, this committee has been initiating better federal coordination of government departments intended to serve the seriously mentally ill population and using advanced research to promote evidence-based treatment for this population.

I’m also part of the Coalition’s new blogging committee, and our first blog will get released soon.

But the problem with that is it’s not a preventative approach and people without treatment can kill themselves or others. The patient who killed his mother noted above was discharged quickly because the law in Massachusetts doesn't consider the need for treatment.

I urge states to model their commitment laws after Wisconsin, which considers the need for treatment. Assisted Outpatient Treatment should be used more often and made available nationwide. We would see more treatment and fewer tragedies if these measures were taken.