Margaux Bergen is the author of Navigating Life: Things I Wish My Mother Had Told Me. She has worked at a variety of organizations focusing on international development and women's leadership, and is now with ORBMedia. She is based in Washington, D.C.

Q: Why did you decide to write this book for your daughter, and did it evolve slowly?

A: I made the decision overnight, when I stared up at the ceiling when she was 9 or 10—[various] miserable events were all happening at once, how do I teach her to survive?

I came up with the title at once, but it took 9 ½ years to write. I wrote it in real time. The complexity of the questions [changed].

Q: Do you think this book is geared toward young adults, or can middle-aged and older people also benefit from it?

A: What I’ve found in the U.S. and the U.K. is that it seems to be read by all generations—"Things I Wish My Mother Had Told Me" could be the lament of an 80-year-old whose mother is long dead.

I found people reading it in diverse ways [such as] reading it on holiday with their children. One friend doesn’t like talking about things directly with her son so she underlines [parts of the book. Some young women] are reading it to each other. I was surprised by the breadth of it. 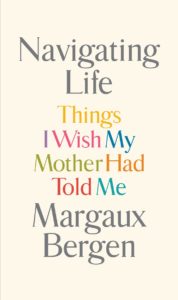 Q: Have your children read the book, and what do they think of it?

A: Charlotte [for whom it was written] has read it and lost it and asked for it again! I believe my second daughter read it, though she has her own book. My son…sometimes one questions one’s children’s interest in the things we do for them!

Q: So you’ve written books for all your kids?

A: What they get is three of the same chapters so there’s a unifying aspect, and seven chapters written to them specifically…

Q: Will those also be published as books?

Q: The book covers a wide range of issues, and you noticed that the types of issues changed over the years. How did you decide what to include?

A: They really depended on my view of her emerging maturity. There’s a parallel conversation and a parallel journey. She was 9 ½, so it was about right from wrong, if you lie you will get in trouble. By 18, it was death, divorce and addiction. It was a natural evolution of a parental voice to a child.

The complexity of my life had to be presented in a careful manner because I had a fair amount of drama in my life and I wanted it to be written in a way she could understand as she moved through her own ages and stages of development.

A: The guide to navigating life. It’s based on 10 virtues that appear in the book. Your approach to things can change—I’m interested in vices. There are 10 vices and 10 virtues. Virtue is meaningless without the counterpoint of our vices.

I’m also about to inherit five more children—there will be eight millenials! I’m getting married in July and he’s a widower with five kids—eight millenials ranging from 25 to 11. He lives in the U.K., so I commute between D.C. and London, and I have a full-time job!

A: I like to think it’s for all ages—chronological age and people’s age. I hope it’s useful 10 or 20 years from now. That’s why I decided to cover all the big topics that affect us everyday, but that we don’t often get the opportunity to raise with our children.

--Interview with Deborah Kalb. Margaux Bergen will be speaking at the Temple Sinai Authors Roundtable in Washington, D.C., on March 25.
Posted by Deborah Kalb at 5:45 AM