Deborah Noyes's books include Ten Days a Madwoman, a biography of journalist Nellie Bly for older kids, and the forthcoming The Magician and the Spirits, which focuses on Harry Houdini. She is also an editor and photographer, and her work has appeared in a variety of publications, including Threepenny Review and The Boston Sunday Globe. She lives in Western Massachusetts.

Q: Why did you decide to focus on Nellie Bly in your book Ten Days a Madwoman, and what did you learn about her that especially surprised you?

A: I first encountered Bly in my friend Matt Phelan's graphic novel Around the World, a lively chronicle of three epic circumnavigations.

Already a star reporter for Joseph Pulitzer’s New York World, Bly beat the record of Jules Verne’s 1873 novel Around the World in Eighty Days and became, for a time, the most famous woman on the globe she’d just girdled. And she was only 24.

But in the end it was the lesser-known story of her hungry beginnings that drew me — and her knack for turning disadvantage to her advantage.

From her beginnings in rural Pennsylvania, Bly’s deck was stacked against her: her father died when she was 6, without a will, leaving the family financially and emotionally unstable; her desperate mother remarried to an abusive drunk, a disaster ending in a rare (at the time) divorce; one of her first articles challenged unfair marriage laws.

She got into journalism in the first place because her family ran out of money to keep her in boarding school (she was training to be a teacher).

An editorial letter responding to a Pittsburgh Dispatch column urging women to stay home and out of the workplace won Bly her first big break. Within months — as a “staff reporter” stuck writing society and fashion stories — she set her sights on New York. 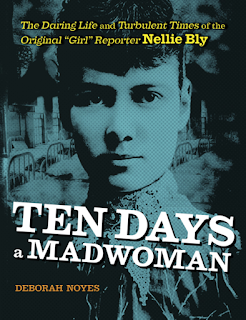 When no Manhattan paper would hire her, the penniless reporter devised a way to gain audience with the men holding her future in their ink-stained hands. The next time Bly showed up on Park Row, it wasn’t as a job candidate but as a freelance correspondent for her old Pittsburgh paper. Her question for the newspaper “Gods of Gotham”: Could a woman make it as a writer in New York? And the rest is history.

Q: In the author's note, you ask, "What makes a good reporter?" How would you answer that in connection with Bly?

A: Stubborn persistence got Bly in the door of the World, but daring kept her there. Her first official assignment was to pose as a patient in a notorious insane asylum. “I had some faith in my own ability as an actress,” she wrote later. “Could I pass a week in the insane ward at Blackwell’s Island? I said I could and I would. And I did.”

She not only got herself committed, convincing police and medical staff that she was insane — she endured 10 days of rancid food, ice-cold baths, enforced isolation, and other intolerable conditions to get her “item.” Her expose shocked the nation and led to reforms. 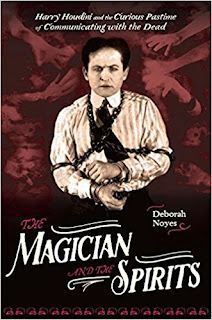 Q: You have another new book coming out later this year about the magician Harry Houdini, focusing mostly on his efforts to communicate with the dead. Why did you choose that aspect of his life to explore?

A: There’s no shortage of Houdini biographies out there, but his “debunking” period — a crusade to expose fake mediums and other spirit fraud, which spanned 30 years — gets short shrift. Some people don’t even realize he did this, much less that it became an extension of his career as a magician and escape artist, and an obsessive aspect of his identity.

I’ve long been fascinated with Spiritualism and its shadings (my adult historical novel, Captivity, centers around the Fox Sisters, two founders of the movement), so the chance to pair that with magic and magicians—this magician, the “mystifier of mystifiers,” no less — was irresistible. Throw in a little spirit photography, and you have a project made in my own personal heaven.

Q: You've written fiction and nonfiction for different age groups. Is your writing process similar, or does it differ depending on the type of book you're working on?

Picture books are so collaborative. There are more stages, more creators involved (author, editor, illustrator, designer). They're less time-consuming but harder -- for me -- to write because you have to distill. You have to load and measure every word and then leave out 75 percent of what you put in and trust someone else to make up the difference with pictures. It's humbling and very satisfying.

A: Two projects, one fiction and very overdue, so I won’t blather for fear of jinxing it. The other is another narrative nonfiction book, this time about the race between two brilliant and competitive scientists — rival pioneers in the fledgling field of paleontology — to uncover more and bigger fossils in the newly opened Wild West. At the moment it’s called Hatsful of Bones.

A: I prefer to maintain an air of mystery (smile).