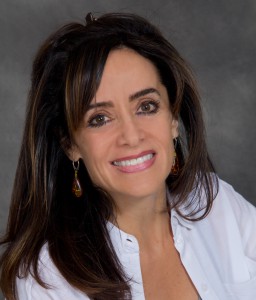 K. Riva Levinson is the author of the new book Choosing the Hero: My Improbable Journey and the Rise of Africa's First Woman President. It focuses on Liberia's Ellen Johnson Sirleaf. Levinson is the president and CEO of KRL International LLC, a communications and government relations firm. She is based in Washington, D.C.

Q: How did you end up working with Ellen Johnson Sirleaf, and at what point did you decide to write a book about your experiences?

A: The book opens in Mogadishu, Somalia. It’s 1989, I am on a mission to sign a contract with a murderous dictator as anti-government rebels are surrounding the city, and then my plane gets commandeered, leaving me stranded. And so my career began.

I was 28, and already weary and jaded with my work as an international lobbyist, burdened with meaningless client assignments, taking unnecessary risks, and uncertain of my ability to make a difference.

And then I met Ellen Johnson Sirleaf. It was the summer of 1996, she was serving at the United Nations, in exile from her native Liberia, and considering returning home to help restore the peace. Liberia at the time was in a state of civil war, controlled by warlords, with half of the population refugees, or internally displaced.

I was blown away by Ellen’s presence and her chutzpah, her commitment to democracy, to human rights, to putting everything on the line for her war-torn country, regardless of the risks and the costs. And I made a determination, at that meeting, in her U.N. office that I would find a way to help her, and work with her. Six months later I did.

I went on to work with Ellen for 20 years, through three election campaigns, through the efforts to restore peace, and rebuild the country, and then, in 2014, to help the country battle the deadly Ebola virus disease. It was only after Ebola was defeated, in early 2015, that I felt I had earned the right to tell my story, Ellen’s story, and the story of the people of Liberia. 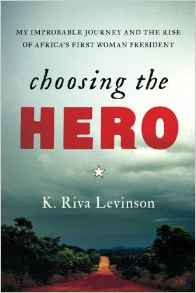 A: The title was not chosen until I completed the book, which is not unusual, because when you write a memoir, and give into the process, you don’t know where you will end up.

Choosing the hero is about the struggle we all go through to find purpose, find something/someone to believe in, about the intersection of lives, the choices we make and the impact we have on others.

The significance of the tile is revealed in the afterword of the book and is explained as follows:

“Working with Ellen has taught me to follow my heart and not to fear being misunderstood. I have come to see that certainty is a luxury, and destiny a journey that reveals itself with time. It is easy to stray off course, to doubt and lose faith, to see compromise as surrender, to feel judged, isolated and even abandoned. But there is always something to hold on to, the belief in yourself. I have come to appreciate that we need people to guide us, those we admire and those we believe in the heroes that we choose.”

A: Ellen Johnson Sirleaf returned her country of Liberia into the community of nations, from what was a failed state; a state that had destabilized an entire sub-region and gave the world the vernacular of “child soldiers and “blood diamonds.”

She has maintained the peace for 12 years, restored democratic institutions, created the conditions for a vibrant civil society and a free and dynamic press. She has restored civil services, re-built the education system and begun to re-build the country’s infrastructure.

All that being said, many challenges remain and economic growth has stagnated from the collapse of global commodity prices, and the linger effects of Ebola. Moreover, institutional and societal corruption remain, and must be rooted out. But all in all, she is the best president that Liberia has ever had.

Ellen’s impact on me, like her country, has been profound. By permitting me to be part of her personal struggle, and then the fight to bring peace, democracy and development to Liberia, she gave meaning to my professional life, and through the work, I found a mission worthy of the legacy of my maternal grandmother, a refugee of the Holocaust, my Oma.

Q: What do you see looking ahead, for Sirleaf and for Liberia?

A: Liberia holds its presidential elections in October of 2017, and for the first time since 1944, political power will be transferred from one elected leader to another. I am confident that the Liberian electorate will vote deliberately, and hold their leaders accountable, and that the next generation will build upon the foundation of peace that Ellen has laid down Liberia may have its ups and downs, but its path forward is irreversible.

Ellen will be the first retired president of Liberia to live peacefully in the country for half a century. That is something. She will likely spend time with her many grandchildren, work on her presidential library, and continue to raise her voice for women, girls, gender equality, democracy and human rights in Africa and around the world.

A: KRL International LLC, my company, continues to work in the world’s emerging markets, in Africa, Latin America and elsewhere. We will be supporting Liberia’s democratic transition in October of 2017, and beyond Liberia, continue to look for the next generation of heroes to support and advocate for.

Most recently, KRL supported the campaign of Nana Akufo-Addo, the opposition candidate in the West African nation of Ghana, who was elected last year as the president of the Republic of Ghana.

He, like Ellen Johnson Sirleaf, fought tirelessly for rule of law and democracy in Ghana for nearly three decades, and like Ellen, it took him three tries to become the leader of his nation. We are currently working with the government of Nana Akufo-Addo for which we are honored.