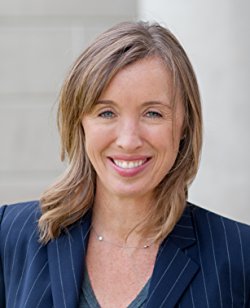 Bridget Quinn is the author of the new book Broad Strokes: 15 Women Who Made Art and Made History (In That Order). She has worked at the Metropolitan Museum of Art, has taught at Portland State University and other schools, and is an advisory board member of Narrative Magazine. She lives in San Francisco.

Q: How did you come up with the idea for this book, and how did you choose the artists to include?

A: Believe it or not, the idea for Broad Strokes – or something like it – rattled around in my head for more than 20 years. When I read Vasari in grad school, who wrote Lives of the Most Excellent Painters, Sculptors and Architects (basically, Who’s Who of the Italian Renaissance), I thought: “I’d like to do that for women artists.”

Vasari is sometimes considered the first art historian, but his approach is different from art history today, which tends toward the formal, ideological or theoretical. Vasari delighted in the life as much as the work, and he sprinkles his commentary with generous seasonings of gossip. Vasari is still fun to read. Noted.

But a troubling aspect of Vasari is that he created one of the founding myths of Western art, which is that of innate artistic genius. In other words, these guys came out of the womb magnificent and nothing (not even Giotto herding sheep) could stop their artistic genius from bursting forth in the world. They simply had to fulfill their glorious destinies.

Which is troubling since Vasari includes just four women in his many volumes. It feels implied that maybe women don’t generally carry the greatness gene.

The choice of artists included in Broad Strokes is idiosyncratic based only on women artists whose work I’ve loved and who have meant something to me at various waystations in my own life. It could have been much longer, but 15 was the number we landed on (for reasons made clear in the book!).

Q: You write of your time in college, when you first compiled a list of women artists, "Then, as now, I called myself a feminist, but my fixation with these artists went beyond feminism, if it had anything to do with it at all....In some strange way, I felt they understood me. They belonged to me." What role do you think feminism plays in the work of these artists? 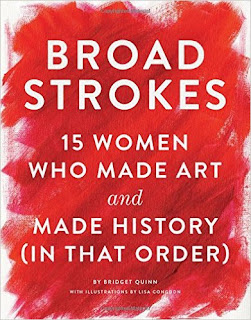 A: Quite honestly, I’d say feminism as a social and political movement played little to no role in the work of most of these artists. There are exceptions: Ana Mendieta for one, who drew on a powerful tradition of the goddess in world art for both personal and political reasons.

But there’s no question in my mind that simply making art as a woman is always a feminist act – it’s an insistence on being seen and on making others see the world from a woman’s point of view (however apparently “banal” the subject matter, this in itself is revolutionary).

But feminism was essential to recovering many women artists whose work was “lost” to history or was undervalued simply by virtue of the artists being women. Feminism became central to my own desire to seek out the work of women artists – to recovering their lives, legacies and art – and in trying to understand what social, psychological and political barriers they faced.

In the beginning, though, the quest was more primal. It began as a tug on my 19-year-old heart.

Q: You begin the book with Artemisia Gentileschi. Why did you decide to start with her, and what did her career represent in the history of art?

A: Very simple. She was the first woman artist in my Art History 101 textbook, H. W. Janson’s History of Art. On page 500. By then it’s the 17th century – and the book begins with the dawn of human civilization. That’s a long drought for half the population of the western world.

As far as what Artemisia represents in the history of art, she’s one of many women artists of the Italian Renaissance and Baroque who were lost to history or nearly so, but she is one of the most important in terms of the heroic scope of her artistic vision and her celebrity in her own time.

She is also, unfortunately, a terrible example of how a certain kind of received history can shape a legacy. Because she was raped by one of her instructors and underwent an infamous public trial, for centuries Artemisia was mostly referenced in terms of her purported lascivious sexuality rather than for her monumental paintings of heroic women (and others).

Q: Your last artist is Susan O'Malley. Why was she a good choice to end with?

A: I ended with O’Malley for several reasons. One, she was a local artist whose work I’d seen in and around San Francisco for years, and I was always glad to come across it. Her work goaded and inspired me.

Two, as a contemporary artist, she seemed totally “normal” and relatable in the sense that she grew up in the suburbs and had a fairly unremarkable childhood and young adulthood. In other words, art can come from anywhere (and everywhere).

Third, I like the earnest optimism of her work, which is both rare and hard to pull off in a fine-art setting. It feels very brave in that way.

Finally, her life and art are, I think, an object lesson for all of us to just get on with it and get to work. Or as O’Malley might put it: Do Things That Matter to Your Heart.

A: I’m revisiting a memoir I put aside when I started Broad Strokes, about growing up in a family of 11 in Montana in the 1970s. A few chapters have appeared in Narrative Magazine and one of those, “At Swim, Two Girls” was included in The Best American Sports Writing 2013. I’m excited to get back to it.

I’ve also started researching and outlining a dual biography of two 18th-century women artists. The research part is divine. The terror of writing it all down hasn’t started yet, so it just feels thrilling and fresh. Such a good place to be.

A: Well, I’m a member of the San Francisco Writers’ Grotto, a collective of narrative artists (poets, novelists, journalists, filmmakers, etc.) who share space, a lunch table, a brain (kidding), ideas, and generally help one another as we can.

Together with Larry Rosen, I’m one of the co-hosts of The GrottoPod, our new podcast on writing and the writing life. You can find us here.