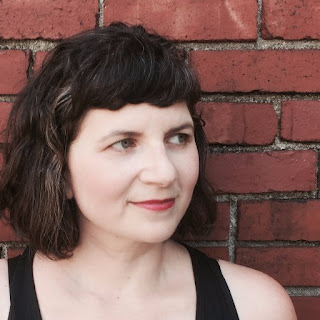 Rebecca Schuman is the author of the new book Schadenfreude, A Love Story: Me, the Germans, and 20 Years of Attempted Transformations, Unfortunate Miscommunications, and Humiliating Situations That Only They Have Words For. She also has written Kafka and Wittgenstein: The Case for an Analytic Modernism, and she is a columnist for Slate and The Chronicle of Higher Education's Vitae. She lives in St. Louis.

Q: Why did Kafka become such a longtime passion for you, and how did it lead you to your fascination with all things German (given that, as you state in your new book, he wasn't German)?

A: Wow, great question. My relationship with Kafka has changed so much, and my relationship to the German language--and, by extension, culture--is directly traceable back to him.

My original attraction to Kafka was what, I think, attracts a lot of brainy-but-misunderstood teens: He was SO good at depicting this primal, visceral, almost desperate alienation from everyone around him. He was sort of the first-ever goth kid who nobody understands, you know?

There's this really short story (one of many he wrote) called "Bachelor's Unhappiness," about coming home to an empty house and having only a forehead to smack with your hand, and that just pierced directly into my soul when I was a teenager, largely ignored by boys (except for one REALLY important one, as the book reveals).

When you feel like nobody understands you, the best thing in the world is to find someone else to be misunderstood with. For me, that person was Franz Kafka.

But as I began to study him seriously, I realized that that reading of him was only one of many, and that he actually had profoundly sophisticated, prescient and, honestly, brilliant things to say about the nature of language and communication. 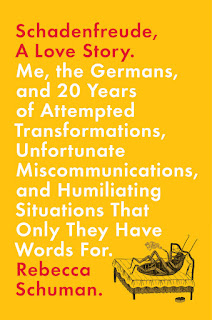 When I stopped trying to figure out what his stories meant, and concentrated instead on how they did--or didn't!--my relationship with him became much more rewarding (and much less one-sided)! In order to gain the German fluency I needed to read him in the original, though, I had to major in German in college.

And though I had little patience back then for any non-Kafka-related German thing, as I got older, that language really came in handy when I got interested in Walter Benjamin and Hannah Arendt and other writers who, what do you know, wrote in German.

By the time I started my doctorate in German, I began to recognize the luminous genius of Goethe, Schiller, Lessing, Kleist, Robert Walser, Ingeborg Bachmann, and the philosophers, too: Nietzsche, Hegel, Kant, Wittgenstein--Kafka brought me to all of those people, and for that I will always be grateful.

A: The book's primary title, Schadenfreude, A Love Story, signifies the two polar (but ultimately intertwined) directions of the forces governing my relationship with both Germans and myself.

The Germans enjoyed watching me fail at assimilating into their culture, that's for sure--but there's also this perverse enjoyment I get from watching myself fail that has been hard for me to admit for most of my life. But now that I've published it in a book for God and everyone else to see, I guess that cat's out of that particular bag!

The extremely EXTREMELY long subtitle (or "reading line," as we call it in the biz) is a result of a two-week collaboration between me and my editor at Flatiron Books, Colin Dickerman.

We wanted every single word of that subtitle to be perfectly indicative of what was to come in the book--and we also wanted it to be a direct play on one of the jokes I make in a chapter about academia, where I say that every professional academic article has the same title template, which is "MILDLY CLEVER THING: Three-Part List, 'Incomprehensible' Scare Quotes, And At Least One Made-Up Word." 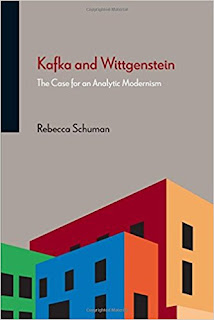 Since I'm not an academic anymore, I didn't have to make up any words, but I wanted the MILDLY CLEVER THING, colon, Endless List structure to parallel the structure of the life story that lead up to my own struggle with German-adjacent academia.

Q: How did you decide on the book's organization, and on the different German words you use as chapter titles?

A: I have always been obsessed with interior symmetry (I think it comes from teaching a lot of Greek tragedy to freshmen when I was a professor), and one thing I always noticed about great literature--which I do NOT create myself, but simply try to acknowledge in my work--is that not a single word is wasted, and everything has a purpose.

Even though the book is a memoir and I technically didn't make it up, I still plotted it (and omitted A LOT of details from my life--future books, I guess), and I plotted it really intricately, like a novel, so that it would have both interior and exterior symmetry.

Q: In an interview with Slate, you said, "One of the most endearing things about Germans is that they neither understand nor enjoy exaggeration as humor. Given that hyperbole is my primary form of communication, I imagine many Germans will disagree with their culture’s portrayal." Do you have more of a sense now of how German readers have reacted to the book?

A: So far they've all thought it was really funny. I think I just know a lot of really cool Germans. Several of the Germans who appear in the book have already read it and one said she "peed her pants," but she had literally just given birth when she said that, so I am pretty sure she still had a catheter in and it didn't have much to do with my book. She didn't want to sue me, though!

A: My column on The Awl, "Deutschland über US," which is a digressive weekly dive into what's happening in Germany, a.k.a. the last bastion of liberal democracy in the world. Some other long-term projects that are top-secret for now, but that I hope to be able to talk about in public soon.