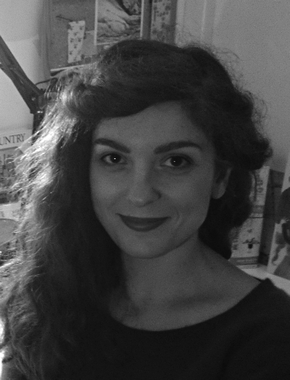 Simona Ciraolo is the author and illustrator of the new children's picture book Shy Ones. Her other books include Hug Me and the forthcoming If Winter Comes, Tell It I'm Not Here. She was born in Sardinia and lives in London.

Q: How did you come up with the idea for Shy Ones, and for the little octopus, Maurice?

A: The desire to write a story like Shy Ones has been with me for a few years: the image of two introverted souls finding each other in a world that praises both extroversion and the ability to thrive in any social setting was one that attracted me deeply.

However, I do remember the day an image that was to become part of the book came to me with clarity: it was that of a child wearing a brown paper bag on his head. That image pretty much set the tone and got me writing. At the time I still wasn't certain my character wanted to be human, so I kept an open mind. 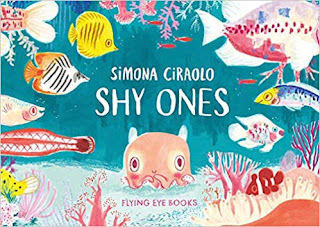 As serendipity would have it, around that time I happened to watch David Attenborough's Blue Planet II and made my acquaintance with a Flapjack octopus. It was as clear as day that I had met the protagonist of my story, and this is how Maurice came to be.

Q: Did you work on the pictures or the text first, or both simultaneously?

A: The story was written first and I did not begin to work on the visual universe until I was satisfied with the text. However, while I write I can clearly see the pictures running alongside the words in my mind, so the interplay of the two parts of the narrative is always created, if not executed, as a fully formed whole. A: If I was to be succinct, I would say: empathy and self-acceptance.

I hope readers are inspired to find in themselves the ability to be playful while remaining true to their own nature, to develop the curiosity to discover and get to know the other for who that person is and at a pace they both find comfortable, not allowing biases and pre-judgement to run the show in the meantime.

For the introverted child I hope this story might feel like a sight of relief, a refuge where they can recognise themselves and feel very good about it.

A: I was 19 or 20 when I rediscovered picture books. I was in film school at the time, studying for my animation degree.

Animation, like all filmmaking, is a process that relies on teamwork; it requires patience and flexibility and tends to bring together the strength and voices of all the people that take part in the production. It is a lengthy and costly enterprise, too, and the combination of these factors requires compromising between the initial artistic vision and the hard reality of financial restrictions. Writers, on the other hand, are not required to forgo the integrity of their vision in response to external demands: the only limitations are those inherent in their medium of choice, and I think the best writers know how to exploit them to the advantage of their narrative.

Picture books have been, for me, the medium that truly quench my thirst for self-expression and my desire for storytelling. In a picture book I bring together my love for writing and drawing, both of which I cultivated since early childhood, with the storytelling skills I developed in film school.

It is rather funny, but whenever I think of a story it almost invariably seems to come to me in the shape of a 32-page picture book.

A: At the moment I am going through my favourite phase: development! I love to watch a book take shape. It's almost like it has a mind and a life of its own.

A: I am excited to announce that, as well as Shy Ones, I have two more books coming out this year.

I have illustrated Robert Louis Stevenson's poem "From a Railway Carriage" for the Italian publisher Edizioni EL and the book will be released in Italy in September.

Then, in October, a second picture book I've written and illustrated will be released; the title is If Winter Comes Tell It I'm Not Here and it is published by Walker Books in the UK and Candlewick Press in the US.