Michael Hall is the author and illustrator of the new children's picture book Swing. His other books include My Heart Is Like a Zoo and Perfect Square. A former graphic designer, he lives in Minneapolis.

Q: How did you come up with the idea for Swing?

A: The characters in Swing are anthropomorphic letters. As a graphic designer, I developed a deep affection for letter forms and attached personalities to the different characters. I found all sorts of ways in which the English alphabet is like a community of people.

One aspect of letters that interested me was whether or not they knew their purpose was to make words. For Swing, I decided they did not, but gathering in groups seemed natural.

I imagined that, over time, they had come to accept a lot of misguided rules regarding which letters should form groups together — making it unlikely their groups would form words. So consonants avoided mixing with vowels, straight letters thought round letters were inferior, and letters from one side of the alphabet were skeptical of letters from the other side.

It wasn’t until I realized that by making the characters L, O, V, and E, one letter at a time could get rejected for being different, then turn around and reject another letter for another difference. 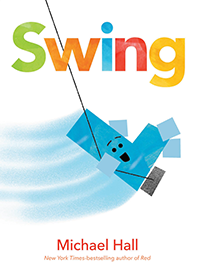 Swing sat in a drawer for several years, but after the 2016 election, I began to look for stories that contradicted the Trump narrative. Swing is one of those books.

A few years ago I wrote a story about the lowercase i called Little i. Last year, I published a love story for grown-ups called u&i. There still is much to write about the community of letters!

Q: Did you work on the illustrations first or the text first, or both simultaneously?

A: One of my favorite ways to work is to come up with a series of related pictures that I find interesting and try to figure out what sort of story the pictures would like to tell. That way I can put off knowing what the story is about — which tends to narrow my thinking — for as long as possible. My Heart Is Like a Zoo and Perfect Square were done that way.

I’ve worked the other way as well. With Cat Tale I began with a list of homophones and homonyms and went about trying to fit them together in a way that made some kind of sense.

I knew that Wonderfall was going to be about fall from the beginning, but I started by coming up with 15 made-up words in which the suffix ful is replaced with fall. From there, I made illustrations that put the words into context. 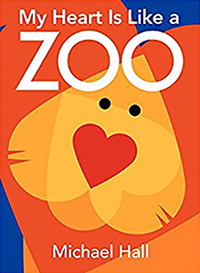 I also have a habit of making stories based on metaphors. In those cases, I work with words and pictures at roughly the same time. I put Swing in that category.

Q: How did you develop your artistic style?

A: I was a graphic designer working primarily on trademarks for companies and organizations before becoming an author. This experience has everything to do with how I make picture books.

One feature of a good trademark is that it will last for many years without looking dated.

I want my books to last as well and employ some of the same tactics: avoid anything trendy or decorative; use basic shapes and primary colors (and black and white); try to do as much as possible with as little as possible.

Beyond that, many of the concerns I had as a designer continue to interest me as an author, such as economy, ambiguity, and humor. I look for words and images that can be interpreted in different ways and are both visually and conceptually compelling.

My visual style is clearly that of a graphic designer. I prefer flat images and avoid techniques that imitate three dimensions. I’m constantly trying to remind the reader that the images are, first and foremost, ink on paper. 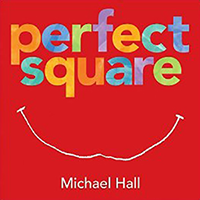 A: I hope children enjoy the experience of hearing or reading the story. I hope they want to find out what will happen to the characters and laugh at the notion of riding an untethered swing into the sky.

Most people at an early age are confronted with the choice between rejecting someone in order to establish their place in a group, or to welcome that person and face possible rejection themselves. I hope it will nudge them ever so slightly to see that inclusion, not rejection, is the path to joy.

A: I’m finishing up House Mouse, a book about a traveling mouse who comes upon a warm, welcoming flame and builds a stove — and eventually an entire house— around it.

This was supposed to be the book that came out this spring, but as the final deadline approached, I decided it wasn’t working and switched to Swing, which I already had a good feel for. So I’m happy that House Mouse finally came together.

What comes after that? There are several possibilities, but my favorite so far is a book about  crayons. I previously made two crayon books, Red: A Crayon’s Story and Frankencrayon, and I always thought there should be a third. The working title is Invisible Crayon.

Q: Is there anything else we should know?

A: I am dyslexic. As a child, I found it humiliating to be given picture books — which I called baby books — to read while my peers were reading chapter books. So I try to make picture books that speak to 10-year-olds and 50-year-olds, as well as 5-year-olds.