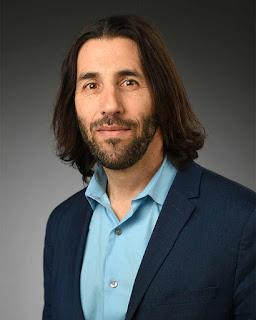 David Hollander is the author of the new novel Anthropica. He also has written the novel L.I.E., and his work has appeared in a variety of publications, including McSweeney's and Fence. He teaches writing at Sarah Lawrence College.

Q: How did you come up with the idea for Anthropica?

A: As a kid I was amazed to learn that roads ran from one end of the country to the other, and that electrical and telecommunications cables circled the entire planet. Excess frightened me. I would sit alone in my bedroom in tears, thinking about how insatiable our needs were.

How could we all be burning petroleum in our homes and in our cars—billions of us, all at once!—and yet somehow there was still enough petroleum trapped down in the planet’s bowels for us to do it again tomorrow and next week and next year? The planet could be circled in a matter of hours in a swift-flying jet; how could it contain so much stuff?

So one way to answer the question would be to say that the book was shaped by this bewilderment. Some of the first chapters I wrote explored “The Anthropica Principle,” a theory developed within the novel by the natural-resource scientist Stuart Dregs, who has discovered that—at our current rate of consumption—human beings exhaust the earth’s resources every eight days.

Dregs’ theory is that all of this stuff is only here because we want it to be; human desire creates and sustains the universe. Once this central conceit existed, questions emerged around it. If Dregs is right, then wouldn’t it be impossible for our species to go extinct? 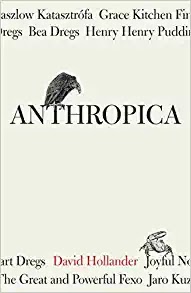 To test this idea, the character of Laszlow Katasztrófa—arguably the book’s center of gravity—emerged. Laszlow sees human beings as a stain on God’s otherwise perfect universe and seeks nothing less than our total eradication.

How could he succeed? Well, what if there were another force that desired the end of the human race as badly as we desired its continuation? Cue the vengeful, superintelligent robots.

Little by little, through questioning the book’s own premise and its possible consequences, these ideas twined around one another and the book as it now appears developed, even if all along I had only a very incomplete sense of what I was doing.

Q: In an interview with luminajournal.com, you said of the book, "New characters, storylines, and ideas are frequently introduced in a way that probably seems random, but if the reader goes forward, they’ll eventually see how it all links together." Did you plan the book out before you wrote it, or did you change things around as you wrote?

A: I didn’t plan it all out, no. But it wasn’t entirely improvisational, either. At first I was just generating material (much of which was ultimately discarded), trying to figure out who was going to be in the book, and why they deserved to be. But once I had several chapters roughed out, I started to make outlines of what the next four or five chapters might look like.

These outlines were invariably wrong. I’d write the next chapter and it would open up an entirely new set of ideas, so I’d change course and re-outline the next five chapters, and again I’d be wrong, and so I’d re-outline (and so on).

It was like taking a thousand-mile journey across a dark road in an old car. I couldn’t see my destination, but I could see the shape of the next 100 yards of road, and that was enough to eventually get me where I was going (engine sputtering the whole time).

The book was often rearranged, too.

Since there are so many competing plotlines, I wanted to divvy out the story in a way that would create both the maximum amount of mystery, and the maximum number of “a-ha” moments… moments where the reader would suddenly understand how two seemingly separate stories were actually interconnected in a way that would drive the book toward some sort of harmonic convergence. 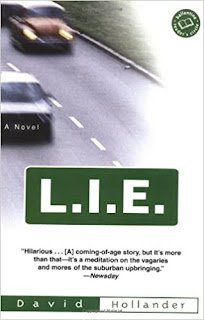 A: I don’t know if I think about it in terms of what a reader will take away. I want the book to be an experience. I’d like it if the process of reading it brought joy and raised questions. There are all sorts of messages in here about human folly and myopia, our inability to see how caustic our influence on this planet (the only one we’ve got!) has been.

But I don’t think I’m trying to steer the reader toward any particular lesson or conclusion. What I really want is to cast a spell. I want Anthropica to feel inexhaustible, for it to wrap back on itself like a Möbius strip so that it can never truly be “finished.”

For me, the book is both a postmodern apocalypse comedy, and a loving testament to our survival, our endurance… to the fact that we are somehow still here.

Q: Which books do you particularly admire?

A: Oh boy. How long do we have? I would say that I generally admire books that seem like they could only have been written by one human being… books that have a powerful vision and are unlike all other books.

Among these would be Anne Carson’s weird pseudo-novels (Autobiography of Red, The Beauty of the Husband), Cormac McCarthy’s biblical violence-epics (Blood Meridian, Outer Dark), the trick-box works of David Mitchell (Cloud Atlas), the darkly strange poetics of Clarice Lispector (The Hour of the Star), and the works of David Foster Wallace.

But if you ask me the same question tomorrow, I’m likely to compile an entirely different list!

A: I’m editing and arranging a collection of stories I’m calling The Oath, most of which have been published in various places, and I’m working on an essay exploring the 20 years that have passed between the publication of my first novel, L.I.E., and the publication of my second, Anthropica.

Trying to look at how rejection tempered my writing, and how it wasn’t until I’d surrendered all hope that I was able to experience this renaissance (such as it is).

A: Anthropica is dedicated to my wife and two children, who have been the constant good in my life throughout the long struggle to publish this second novel.

Oh, and let me put in a plug for my band, Diamond Hotel, which is releasing a second album—titled Imagining the Sun—sometime in the coming months. (We’ve been described by one reviewer as “darkly cinematic, underground noir”—diamondhotelband.com.)