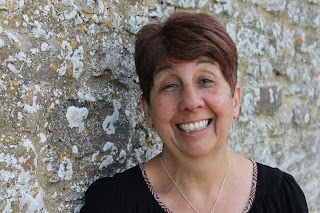 Miriam Halahmy is the author of Rip to the Rescue, a new middle grade novel for kids. It focuses on a rescue dog in London during World War II. Her other books include Saving Hanno and The Emergency Zoo. She lives in England.

Q: How did you learn about Rip, the rescue dog, and also about the teenage messenger boys during the London Blitz in World War II?

A: I have known the story of Rip the rescue dog for a long time as I have read a great deal about World War II and his story is so interesting. He was a mixed breed dog with this extraordinary instinct to detect people alive who had been buried under rubble during an air raid. 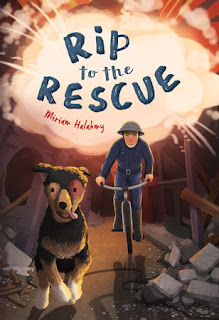 Rip saved the lives of over 100 people in the London Blitz and received the Dickin Medal for animals – like the Victoria Cross for humans.

His story came up again when I was researching what happened to animals in World War II and during my research I also found out about teenage messenger boys. This was another extraordinary story of the contribution of quite young boys to the war effort.

They were needed to carry messages on their bicycles, which they had to provide themselves, from a bombed area to the fire brigade. During a raid the telephone wires were often broken and help was needed when fires broke out. These boys bicycled around London and also all the other cities that were attacked, carrying the messages as bombs fell all around them.

Some of them were badly burnt and I read about a boy in Coventry who was killed. So they were incredibly brave. They were supposed to be 17 but I have heard a man interviewed on television who was only 14 when he volunteered, so they lied about their age.

I decided to put the two stories together to show how both animals and young people often made an important contribution to the war effort.

Q: This is the third book you've written about animals and children during the war--what drew you to that theme, and how would you compare the three stories? 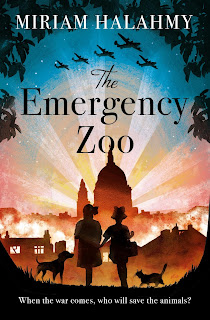 A: A few years ago I read a little known story about World War II.

750,000 pets were put down at the outbreak of war in the UK because people didn’t think they could feed them when rationing started, they thought they would be a problem when the bombs fell, and the government stated that pets could not be taken down in public shelter.

I was quite shocked by the story. I have always loved animals; we kept dogs when I was a child and animals in the wild fascinate me.

I immediately wondered, What would the children do? I decided that they would hide their pets away in a den in the woods and called the book The Emergency Zoo.

Many other children find out about the hideout and bring their pets too, including a baby cobra and a very grumpy goat. The children have a lot of problems, such as keeping the animals properly fed.

But their biggest issue is what to do with the pets when they are evacuated. They only have a week to solve the problem. 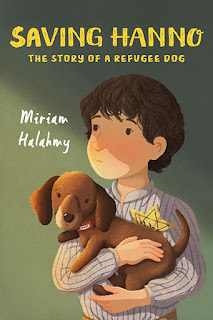 During my research for this book I discovered that there was a dog associated with the Kindertransport, the rescuing of 10,000 Jewish children in 1938/1939 from Germany and Czechoslovakia, who were brought to the UK by train.

I therefore decided to create a German Jewish boy called Rudi, 9 years old, who comes on the Kindertransport and who brings his little dachshund to the Zoo.

After The Emergency Zoo was published I was asked to write Rudi’s story. This was a great opportunity to go into Rudi’s life in Nazi Germany, his family, friends and school and his experience of having to leave everything behind.

Rudi focuses on his dog, Hanno, as a survival mechanism in a dreadful time. He has to save the dog’s life three times in the book. I called this book Saving Hanno.

Rip to the Rescue is my third World War II book which focuses on animals. Each book has grown out of the other and out of the original story of the killing of the pets.

I find it fascinating that people evacuated their children and put down their pets. But when you study the war there are hundreds of amazing stories of children playing an important part in the war effort and pets doing incredible things too.

I have another story I would like to write, again from a true story about an amazing little dog who rescued people. Perhaps I will write it one day.

Q: What type of research did you do to write this novel, and what did you learn that especially surprised you?

A: It was very interesting researching Rip and his story. I read various articles and I was granted permission to use the attached photo of Rip with his handler, Dick King, who found him after an air raid and discovered his amazing talent. 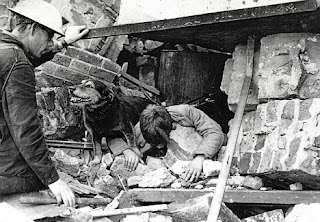 I read a great deal about the London Blitz and decided to set my book in an area of North London called Camden.

Many books and stories about the Blitz tend to focus on the East End of London where the docks are sited because this was the most badly bombed area. But I live near Camden and have taught in Camden schools. It is a very interesting area and so I chose to set my book there.

During my research I found a lot of interesting stories about children in World War II. Although over a million were evacuated from the cities as war was declared, by Christmas 1939 many of them came home. They were bored in the countryside and missed their homes.

When the cities were bombed the following year, they began to play their part in the war effort, sometimes in quite amazing ways.

I read an account of a 12-year-old boy who put out an incendiary bomb with just a stirrup pump and sandbags. These bombs were small but dropped in baskets of hundreds. They flared white hot and were very dangerous. It was incredibly brave to tackle one. 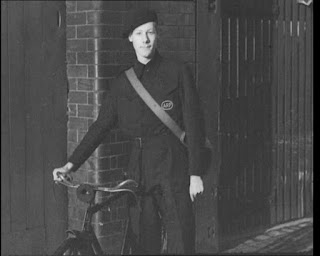 However, the stories about the teenage messenger boys really fascinated me. I knew nothing about them. I wrote to the London Fire Brigade to learn more and I also found a clip from a Pathe newsreel which showed how the boys were trained (see attached photo).

When I talk in schools about these boys, I ask the students if any of them would have liked to be messengers in the war and many say, Yes! It must have seemed a great adventure and of course, when you are young, you tend not to think of danger.

Q: How would you describe the relationship between your character Jack and his father?

A: This is a relationship based on a complete breakdown in communication. Jack’s father is badly injured in World War I and as a result he is terrified his son will be injured when World War II breaks out.

He has a short temper at the best of times, but his fears about the war make him much worse. But instead of talking to Jack, the father becomes more irritable and quite threatening.

I also think that Jack is rather withdrawn because of his hearing loss. He was born deaf in his left ear has found it hard to make friends at school. The war has given him a whole new lease of life and he is determined not to let his father spoil things.

Neither of them is being honest with the other. It takes a crisis for them to decide they must begin to heal their relationship.

A: I am writing a book about a boy who is exiled from Iraq and forced to become a refugee, set in 1951. It is called A Boy From Baghdad and is based on the story of my husband’s family.

A: The second main character in the book, Paula, 12 years old, comes from an Anglo Jewish family. Like most British Jews, they were aware of the Nazi persecution of the Jews because they had family on the Continent.

The British Jews had good reason to be nervous that the Nazis would invade as they knew they would be rounded up and perhaps deported. Paula has become convinced that Germany will mount a successful invasion and she is preparing a hideout for her family.

This is a story I have wanted to explore for some time and this was the right book to tell it.