Susan Campbell Bartoletti is the author of the new children's book How Women Won the Vote: Alice Paul, Lucy Burns, and Their Big Idea. Her many other books include Hitler Youth: Growing Up in Hitler's Shadow and Black Potatoes: The Story of the Great Irish Famine. She lives in Pennsylvania.

Q: Why did you decide to focus on women's suffragists Alice Paul and Lucy Burns in your new book?

A: The simple answer is this: When I learned that Americans Alice Paul and Lucy Burns met in a London police station after they were arrested during a suffrage march to Parliament that turned violent, I was hooked. I knew where the story had to begin.

Who wouldn’t make a new friend that way?

Alice and Lucy did not know one another when they traveled overseas to study. While in London, they became involved in the British suffrage movement. There, they met like-minded women like themselves: modern, educated, interested in politics, and passionate about women’s rights.

In Great Britain, Alice and Lucy learned how to organize and how to lead. When they returned home to the U.S. (Alice in 1910 and Lucy in 1912), the two women infused the 62-year-old suffrage movement with new energy -- and big, bold ideas.

Initially, I planned to focus the story on the Woman’s March of 1913. There had been other parades and marches before, but this parade would be different: five thousand women from around the country would converge on Washington and march down Pennsylvania Avenue the day before Woodrow Wilson’s inauguration, demanding the right to vote. This time, women weren’t asking. They were demanding.

The nonfiction book, I believed, would be 32 or 40 pages, illustrated with archival images and contemporaneous memorabilia and artist Ziyue Chen’s full-color illustrations.

The victory wasn’t as simple as that.

In December 1912, Alice Paul headed to Washington to make plans for the parade. She expected victory within a year. She counted on logic and reason and facts to win over President Woodrow Wilson and Congress.

Instead, the fight for the ballot took additional seven years of parades and demonstrations and petitions and rallies. Women boycotted elected leaders. They picketed the White House. They suffered arrests and endured jail sentences, hunger strikes, and forced feedings.

How Women Won the Vote is still a form that I call a storybook – meaning that it’s not a poem in the sense that a true picture book is – but an illustrated nonfiction story.

Q: Can you compare the impact that Alice Paul and Lucy Burns had on the movement?

A: I’m interested in friendships, in women’s friendships. They had each traveled separately to England. They didn’t know what they wanted in life. For Alice, she let her Quaker faith guide her. I love that they met in a police station. I think a lot about what Plato and Aristotle said about friendship—the best are those born from mutual benefit but help us to become better.

Alice Paul was so disappointed when Lucy Burns did not continue her work after the 19th Amendment was passed.

Alice Paul was quiet and determined. She often would stay quiet, but you couldn’t beat her in an argument. Lucy Burns was quite the orator. She was very comfortable getting up in front of a group. Alice hated public speaking. These two very different personalities just worked. They infused energy into a movement that was stalling. 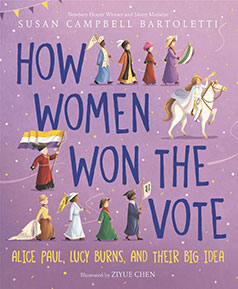 A: I always tell writers, if you’ve ever written a research paper in high school or college, you know how to do it. You hunt for primary and secondary sources. I love primary sources—it breathes life into a story, hearing their actual voices. If I find a quote in a secondary source, I go to the primary source—I want to make sure I’m using it accurately.

There were several surprises. I have a hard time describing them as a “surprise,” because I’d call them, “Ah…but-of-course” revelations.

We’re picketing, marching, taking over the streets. In the early 1900s, up until then, the streets were a male sphere. Women weren’t in parades. They took parades and picketing to a new level. 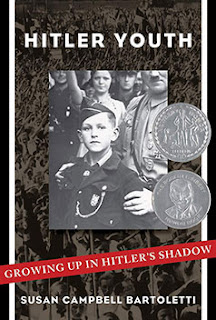 The protestors in front of the White House [earlier this summer] were within their First Amendment rights, and they were tear gassed. The Woodrow Wilson administration came down hard on the women. They were daring to step out of the behavior that was considered that of a true woman.

The second revelation came as a result of Alice’s Quaker faith.

But  -- and here’s that but again -- Alice didn’t take a stand when Black women wanted to join the 1913 parade. Instead, Alice stalled, not responding to their letters and requests. When Alice did respond, she offered a compromise: Black women could march together at the back of the parade.

Alice would insist that she, as a Quaker, believed in racial equality. It’s likely that she failed to act because she feared that she’d lose the “many, many, many splendid supporters” who refused to march with Black women. She admitted her fear about losing the White supporters in a later interview. Her failure to act would forever leave a stain on Alice’s reputation.

The irony of this incident reminds me that our heroes aren’t perfect. They can’t be perfect. They’re human.  Readers of all ages need to see these imperfections so that they can make wiser choices for themselves. No matter how evolved Alice thought she was, she had some growing to do. We all have some growing to do, right?

I loved learning about the role that Black suffragists played in the march: how they took a stand and refused to accept discrimination. Nellie May Quander said, “We do not wish to enter if we must meet with discrimination” and how Ida B. Wells, after being turned away by White women, stepped into the parade mid-march, saying, “I am doing it for the future of my whole race.”

I loved reading about the determination of the Alpha Kappa Alpha (AKA) members, a sorority of Black women at Howard University. If this sorority sounds familiar, it’s the same sorority that vice-president hopeful Kamala Harris joined when she was a student at Howard University. The century old sorority is committed to social justice and working to get out the vote.

In writing the book, I came across a photo of my grandmother, which is included in the book. I don’t know if she voted in 1920, but I know she was registered to vote. This also points out White privilege—she lived in Scranton and was educated. There were no literacy tests she had to pass.

Q: What do you think Ziyue Chen's illustrations add to the book?

A: Ziyue’s illustrations help readers connect emotionally with the story. They breathe life into Alice and Lucy and into key moments and scenes. This is so important for a story that features adults as main characters. 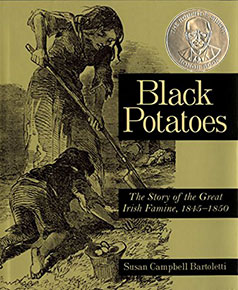 I did archival research and found references for her, and she brought her own style and vision to the book.

We writers for young readers are often told that the story needs to be about or needs to focus on children. I agree that a story for young readers must be grounded in the emotional and/or physical landscape of the reader’s world.

Q: A century after women won the right to vote, what do you see as Alice Paul's and Lucy Burns's legacy today?

A: Alice and Lucy left us with … more work to do!

As I mention above, Alice and Lucy and the other suffragists were marching for many of the same reasons that we march today: the right to vote, the end of disenfranchisement, the right to protest peacefully, the right to fair wages and better living conditions, the right to enact new laws and change unfair laws, the right to an equal education, the right to medical care, and the right to clean air and clean water and healthful food.

We must continue to fight for human equality and true democracy.

A: Queen Bee Rules! This young middle grade novel is about a Queen Bee who can’t wait to emerge and rule the hive, but when she learns that her only job is to lay eggs, she decides she’d rather be a worker bee.

A: Here’s a little inside joke. On page 55, I sneaked in three references (kind of). The first is a nod to a Beatles song. Look at the photograph of Lucy in the biplane. Can you think of a new caption, one that would reference the song?

The second is a reference to a Steve Martin and John Candy movie. If you look at the photographs on pages 54-55, can you think of the movie title?

And then … the timeline on pages 74-75. What movie title comes to mind?