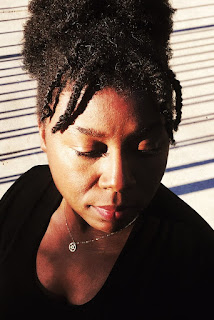 Sherri L. Smith is the author of the new young adult novel The Blossom and the Firefly, which takes place in World War II-era Japan. Her other books include Who Were the Tuskegee Airmen? and Pasadena. She teaches in the Creative Writing MFA program at Goddard College and the MFA in Children's Writing at Hamline University, and she lives in Los Angeles.

Q: You write that a photo sparked the eventual creation of this novel. Can you say more about what inspired The Blossom and the Firefly, and your characters Hana and Taro?

A: I was working on my nonfiction book Who Were the Tuskegee Airmen? when I fell down a rabbit hole of aviation research and came across an article about something called the Chiran Peace Museum.

What caught my eye was this image of school girls in little sailor-like uniforms holding cherry blossom branches in their arms as they waved to a taxing warplane. It was surreal, made more so by the grainy black and white passage of time.

It turns out the peace museum is dedicated to the memories of the Tokkō Tai, or kamikaze pilots who flew their final missions from Chiran in Southern Japan. The school girls worked as maids for these pilots. Their last service was to smile and wave goodbye as the pilots, some as young as 17, flew to their deaths. 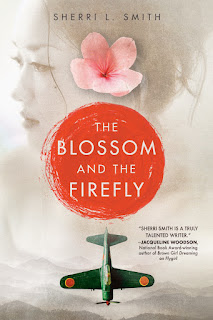 Hana and Taro represent both sides of that photograph. Hana is a junior high school girl working at the base, Taro is a young pilot. While the war brings them face to face, it’s music that brings them together.

I wanted to explore what it means to lose the best of a young generation to violence, and the damage we do to young people when we spend their lives and their potential on war.

A: I started with a lot of secondary book research. M. G. Sheftall’s Blossoms in the Wind was invaluable, as was Dan King’s The Last Zero Fighter and Dr. Samuel Yamashita’s several books collecting the wartime diaries of everyday Japanese.

I took a Japanese class in preparation for a research trip, and to gain a better understanding of the language and culture. I had taken a course in Japanese literature back in college, so I pulled out those books—Yasunari Kawabata’s Snow Country and The Sound of the Mountain in particular—along with more contemporary Japanese books like Translucent Tree by Nobuko Tagaki.

Japanese story structure is different from the traditional Western conflict-based three acts. I wanted to honor that style.

And then I went to Chiran and traveled around with an amazing guide, Reiko Yoshimura. We visited the peace museum and several important sites featured in the book. We also spoke to everyone we met who was of an age to remember the war. It was a truly amazing trip. 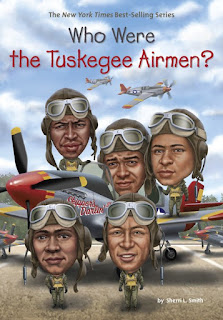 As far as surprises go, the whole story was a surprise to me from start to finish. There are such strange stories around kamikaze pilots in the States. There’s a sort of myth about pilots being like berserker warriors, fueled by drugs and plied with women and booze.

When in fact it seems like there was a real fear of what the West would do to Japan, a desperation to save their country, and a struggle to find the fortitude to complete their missions, even if they did not agree with the method.

Of course, there is a different story for every individual. Taro represents my attempt to understand the actions if the larger myths were not true. What makes a young person willing to die like this?

And for Hana, what does it do to a young woman to have to witness this over and over again? As with so many stories, once you strip away the assumptions, there is so much more to see.

Q: You tell the story in chapters that alternate between the two characters' points of view--why did you write Hana's chapters in first person and Taro's in third person?

A: The short answer is, that’s how they each showed up. When I start a book, I try to listen to how it sounds in my head and use that as my guide. Sometimes that takes a few attempts. Once I have a grasp on what feels right, I try to understand why it feels right.

For Hana, I wanted the reader to walk in her shoes. As a woman, I also felt I might have a better understanding of her, away of accessing her emotional experience. Her story is the “present” of the book. 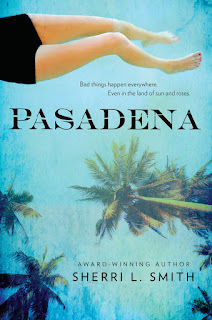 With Taro, I wanted to show his entire life, so we would know what is being sacrificed, and to understand how lifelong indoctrination can be. His story is told in third person past tense to capture that narrative sense. It also allowed me a touch of distance.

The male American soldier has been depicted left and right and I think I could get a grasp on it, but Japanese male soldier experience is less familiar to me. By writing in third I had the ability to watch from the outside a bit, rather than try to inhabit all of his feelings directly. His actions speak for him in many ways, as does his music, and that felt right to me.

A: Oh, so much! And a few simple things.

First, I hope they take away a sense of the beauty of life and that we should not waste it. And the glory of music. And some knowledge of history, of the other side of a familiar war.

But mostly, I hope they take away a desire for peace. This is a love story, but not just between Hana and Taro. There is the love between parents and children, and love of country, love of music, and of peace. All of these are gifts I hope the reader takes with them.

A: I’ve got my hands full! My next book comes out in December. It’s a nonfiction for younger readers, What Is the Civil Rights Movement?. And I am working on a new young adult novel. It’s a bit soon to say what it’s about. I’m still getting a handle on it.

I have a comic book three-issue arc coming out when the world reopens called Disney Villains: Ursula and the Seven Seas from Dark Horse. And a couple of other things in various stages.

Imagine walking into a store that might repair clocks, but you can only see a few finished, and a lot of parts. That’s my desk right now!

A: I have a few events coming up, including a panel called “Writing for Peace” in conjunction with Consequence Magazine, a literary journal that explores the culture and consequences of war. You can learn more about it on the events page of my website, www.sherrilsmith.com.