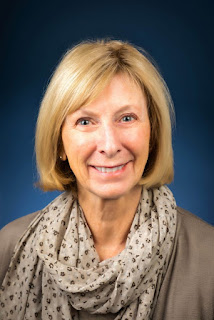 Linda Stewart Henley is the author of the new novel Estelle, which is based on the artist Edgar Degas's visit to New Orleans in the 1870s.  She lives in Washington state.

Q: Why did you decide to write as novel based on Edgar Degas’s stay in New Orleans in the 1870s?

A: I went to college at Tulane University in New Orleans. I never knew then that Degas had spent several months in the city or that his French Creole family’s house still existed. His mother was born in New Orleans. When I learned about his visit in a travel guide, I decided to research the story.

I knew that many people, even those knowledgeable about art, weren’t familiar with this period of Degas’s life, or that he was the only French Impressionist painter to work in the United States.

As I learned more about him and his family in New Orleans, along with the paintings he completed, I thought the story was worth telling. He hadn’t yet achieved fame and struggled to find subjects that inspired him until, shortly before he left, he painted his masterpiece A Cotton Office in New Orleans.

Q: The novel takes place in the 1870s and also in the 1970s. Did you focus more on one time period before turning to the other as you wrote, or did you write the book in the order in which it appears?

A: There’s some backstory here. I wrote Estelle as the sequel to an earlier novel set in the 1970s. It’s probably not publishable, but the story revolved around Anne, the 1970s protagonist, who was in the last semester of her senior year at Tulane when she inherited a house on Esplanade Avenue from her grandfather, who she never knew. 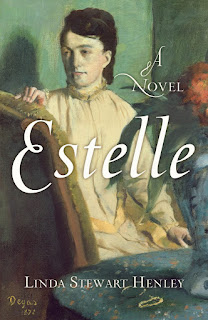 In the house, which had fallen into disrepair, she found a notebook that had belonged to Degas. That became the starting point for the novel Estelle.

I knew that I wanted to begin the 1870s part with Degas’s arrival in New Orleans by train, when he was welcomed by his entire family. In those days, the arrival of steam trains was quite an event, and it seemed like a natural place to start.

As I wrote the story, I alternated chapters between the two time periods. Since the book follows chronology, it was almost like writing two separate stories, though of course I had to intertwine them as the book progressed.

Q: What did you see as the right balance between the actual historical figures you write about and your fictional versions?

A: I wanted to depict the historical figures accurately regarding their relationships with Degas. There’s a genealogical chart at the beginning of the book to help readers to follow the connections. Since 13 family members lived in Degas’s uncle Michel Musson’s house, it was hard to keep track of them all.

We don’t have a lot of information about Degas’s two brothers, but some of the shocking facts we know allowed me to develop their characters in the story to represent their true natures. There’s plenty of evidence that Degas admired and felt affection for Estelle.

All the characters in the 1970s are fictitious and it was easy to write them in such a way that they bounced off the scenes portrayed in the 1870s. I needed a bridge between the two centuries, and a journal kept by Marguerite, a fictional young woman who knew Degas, served that purpose.

Q: Can you say more about the research you did to write the book, and did you learn anything that especially surprised you?

A: I first went to my local library and checked out every book they had on Degas. Most of these were in the children’s section, picture books of Degas’s ballet dancers. During his time in New Orleans, he didn’t paint those subjects, so I had to look farther. I ordered lots of books online.

My research effort was tremendously simplified when I obtained a catalogue produced by the New Orleans Museum of Art to accompany their exhibit of Degas’s New Orleans paintings in 1999. Written by curators, it contained a wealth of well-researched information about Degas and his family, along with interpretations of his work.

I was surprised by the lavish lifestyle enjoyed by the French Creoles and by the behavior and misfortunes of some family members (but it would spoil the story if I told the details).

A: I’ve started work on a historical novel set in World War II in England. It concerns people’s everyday lives as they prepared for what they thought would be an invasion by Germany.

A: When I was in college in the 1970s, I was struck by the obvious one-time grandeur of the houses on Esplanade Avenue. At the time, the area was crime-ridden and dangerous.

I didn’t know anything about the sophisticated Creole culture and people who had built those lovely homes in the 1850s. Now many have been renovated, including the house occupied by Degas’s relatives. It is now a bed and breakfast.

I’m happy to meet with or talk to book clubs or other groups interested in the book.