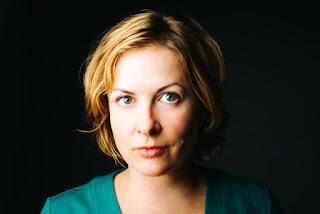 Tess Taylor is the author of two new poetry collections, Rift Zone and Last West: Roadsongs for Dorothea Lange. Her other books include Work & Days and The Forage House, and her work has appeared in a variety of publications, including The Atlantic and The Kenyon Review. She lives in El Cerrito, California.

Q: In an introduction to Rift Zone, Ilya Kaminsky writes, "But what does safety really mean in America in 2019? The answer to this question is uncertain, and this uncertainty vibrates through almost every poem in this collection." What do you think of that assessment?

A: It feels apt. Part of what is at the center of Rift Zone is the sense of living too close to the brink — socially, geologically, economically. In a place prone to rupture. In a place with enormous inequality.  In a place fractured by historic violence and racism.

This was all before the pandemic reminded us that we live linked by breath, that we thrive best when we can all share our skills, that our existing inequities will exacerbate the enormous pain of COVID.

There was this sign just now, on Solano Avenue,  in a closed salon. It said, “Safety is the new luxury.”  I don’t know who authorized such a statement; it felt bald rather than corporate, it didn’t make me want to buy anything, and it felt all too troublingly true. It felt like a cruel referendum on a world that is failing. 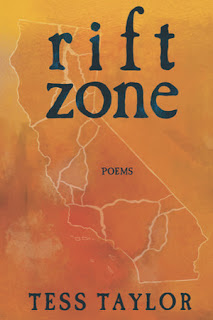 Yes, “safety.” We live in a fracturing world where certain people can use power and wealth to buy islands of stability; yet the truth is that there really are no walls or gates that can protect us against the collapse of the climate, the collapse of public health systems, the illness of our neighbors.

I think in this moment many of us are scrambling to keep our families and those we love “safe” and  some of us have more resources to attempt that — we also live in a world where no one will be "safe" until everyone is.

A: I wrote the poems over 10 years and tinkered in spurts. A book should flow through like a long poem, stages of twisting and revelation. I love collage; and I work by a kind of instinct. Order, reorder, read again.

Read books you love. Then — there are no rules.

You have to defer to your sense of rightness and music. But the collection as a whole should pull you through.

Q: The collection centers around California. How important is setting to you in your writing?

A: I guess more than “setting” I’d say “place.”  “Setting” implies something plopped down or sketched up — the setting of a stage for instance. Or “setting” down. Let’s think about “matrix” or “location.”

What converges here? What trade routes? What winds, weathers, histories, violences, beautiful lights? I seem always to write about places, how they entwine with their histories and stories — I love biology, geology, plant names, microhistories. I nerd out on these things, I ponder them a lot.

We are not separate from our places, we are framed in them. These are layers of experience that shape us, that shape the places in which we move. 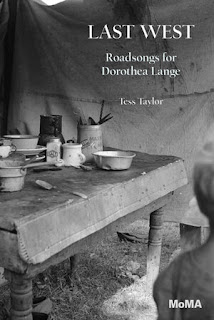 Faulkner once said “The past is never dead. It's not even past." He said that in the South, where part of my family is from. California often makes a mythology of its own newness, of its amnesia to itself, and its violence. We move inside our histories, whether we know to name them or not.

Q: You also have another new book, Last West: Roadsongs for Dorothea Lange. What inspired you to focus on Dorothea Lange's travels through California?

A: I’ve said how Rift Zone had been in the works for 10 years, since I moved home from Brooklyn. Coming home had surprised me but felt right. I came back to a town I’d left 15 years before, had kids, began teaching writing at UC Berkeley.

During those early mothering days, I stumbled across a fact: Dorothea Lange had photographed my neighborhood, the humble cottages of El Cerrito. This fascinated me and made me wonder what she had been seeing. What could she teach me about seeing California? I went to the UC Berkeley library and got out all the books.

Having her nearby as an artist companioned me a little. She turned a lens to my hometown, its back story as an endpoint of the Great Migration and the Dust Bowl and its origin in the World War II shipyards.

She captured the enormous paradox and promise of a moment that desegregated workplaces, the new hope of a group of people finding their way after the Great Depression, and also a moment when our country incarcerated Japanese Americans.

In my pain and restlessness after the 2016 election, I found that Dorothea Lange’s notebooks are held  in the Oakland Museum, and I went to see them. They were full of such haunting fragments — lists of towns she’d passed through, the  voices of people she met along the road.

She’s a photographer but she had an ear for language. She was a note-taker of the telling detail. She captured an American chorus of struggle and protest in a way that still felt contemporary.  When I saw the notes, my heart throbbed.

By a very lucky turn, it turned out the Museum of Modern Art was putting together an exhibition called “Dorothea Lange: Words & Pictures.”  The curator got word of my emergent project, and took an interest. So: I drove all over California. I followed Lange's trails. I made new notes. The book came into being. It was quite a journey.

A: Small short poems that come in spurts, and a play, actually! Hard to know. I have to just daydream a little. New work takes a lot of time. The play is from before, and I’m revising it for a production. That’s fun.